A History of Service: Bringing Musicians Together

The world has never been as connected as it is today. Technology has advanced such that we can communicate across the globe in a matter of seconds. Social media has become wildly popular, changing the internet from just a marketplace to a vibrant town square.

Of course, wherever people can be found sharing their thoughts and interests, you will also find companies reaching out to bridge the gap between people and business. Much like the corner stores of yesteryear, the best companies are active and dedicated members of the community. From its inception, J.W. Pepper has sought to be just that.

Helping people with shared interests connect to one another is no new thing for Pepper. Many of our earliest publications sought to do just that. J.W. Pepper’s Musical Times and Band Journal, which was an early version of the Pepper catalog, also included extensive sections for musicians seeking ensembles, ensembles seeking musicians, and a variety of other musical opportunities. Around the turn of the century, community bands were popping up across the nation, and there was a high demand for musicians with additional qualifications you might expect! Strange as it seems to us today, there were numerous ads for musicians who could also perform another job in the community – jobs such as coal miner, dentist, cigar maker, and more. Pepper’s Musical Times helped these musicians find one another. 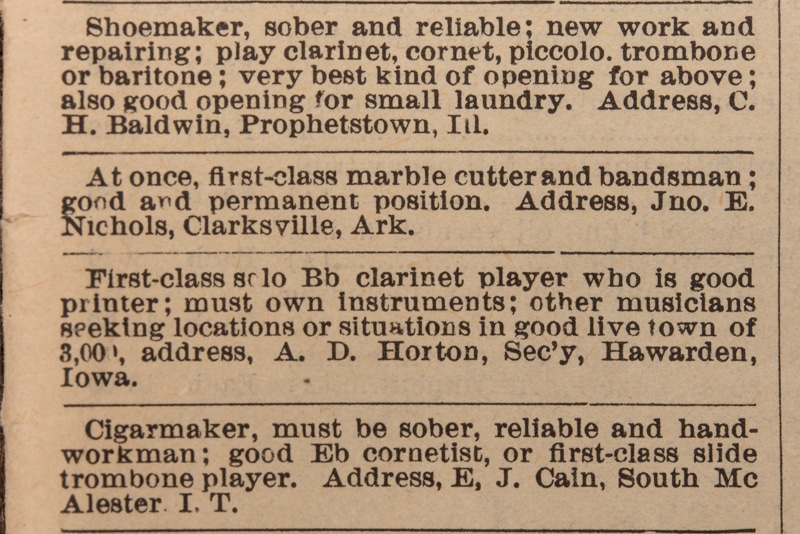 Later, Pepper began to reach out to the musical community in person. In 1955, Pepper sponsored its first reading session. Held at the University of Delaware, this three-day event brought together 500 musicians from around the region. Pepper reading sessions continue to be one of our most popular services. Each of our 11 locations organizes reading sessions for their respective regions, so no matter where you live there is probably an event near you every year. These sessions give teachers an opportunity to perform and evaluate new music from their favorite composers, but they also bring colleagues together as a community. For some teachers, this is the only time each year they will see friends from a different school district or even a different state.

Reading sessions are still an important part of what Pepper does in the community, but over the past 30 years, technology has made small music communities into large, nationwide and sometimes worldwide communities. The internet has made this possible, and Pepper was quick to pick up on this new opportunity to bring people together. The Pepper National Music

Network (PMNM) was launched in 1995. PMNM allowed musicians, music directors, music librarians and more to connect with one another from across the United States. At a time when internet forums were in their infancy, Pepper was using them to foster peer-to-peer collaboration between people who otherwise might never have met.

PMNM eventually evolved into the Pepper website as we know it today. As social media sites rose to prominence, Pepper adapted the new technology to our musical mission. Today, Pepper maintains a presence on YouTube, Facebook, Twitter, Pinterest, and LinkedIn. Using these sites, we have continued to help musicians connect to others in their field while bringing them content featuring many of their favorite composers and interesting stories about the music world. 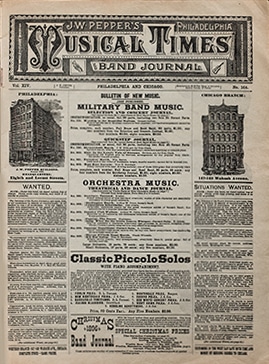 Pepper is proud of its place in the music community. For 140 years, we have done our best to bring musicians across the country together, and we are committed to continuing that mission.

Learn more about the history of J.W. Pepper:

A History of Service: The Pepper Catalog

A History of Service: Pepper Instruments

A History of Service: Editors’ Choice

A History of Service: Music Education

and explore our interactive timeline.