A History of Service: Pepper Buildings

In the simplest sense, buildings are just four walls and a roof meant to house people and objects. It is what you put inside that makes all the difference. Over time, J.W. Pepper & Son has moved in and out of many different buildings, depending on the needs of the company and its customers. No matter where Pepper employees are found, though, our dedication to service has always remained constant wherever we called home.

The company’s first home was a small print shop in the heart of Philadelphia. The shop was owned by James Welsh Pepper’s mother and father, who introduced their son to music at a young age. Only a year after starting the company in 1876, Pepper moved it into a building on Filbert Street. This building was designed to house both sheet music and instruments, allowing Pepper to sell both. At this time, Pepper also began manufacturing instruments and accessories. This was a great convenience for local musicians who could now purchase everything their band needed from one store.

Thanks to J.W. Pepper’s hard work and a boom in demand for music and instruments, the company grew quickly. By 1881, Pepper was ready to open a second store – this one in New York City at 249 Bowery Street in Lower Manhattan. Five years later, seeing the great potential for growth in the Midwest, the company opened a location in Chicago at 149 Wabash Avenue. These stores made it easier to bring music and instruments to musicians across the country. Rather than ordering music to be shipped long distances, customers living near three of the largest cities in the nation could go their local store. Though the New York City location closed after a few years, the Chicago store remained a pillar of the community for over 100 years. 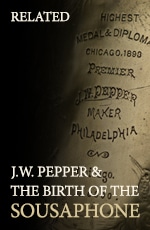 Meanwhile, the operation in Philadelphia was quickly outgrowing the Filbert Street location. In 1890, the company moved to 8th and Locust, just a few blocks away from Independence Hall. This new building greatly increased Pepper’s manufacturing capabilities, allowing the company to become one of the top instrument makers in the country. In fact, it was likely here that Pepper created the first Sousaphone based on specifications written by Sousa himself.

The years at 8th and Locust brought much success to the company. Instrument sales soared and accolades came in from high places. In 1893, J.W. Pepper instruments won the highest medal and diploma for craftsmanship at the Chicago World’s Fair. However, as the century turned, so did the focus of the company.

By 1910, Pepper had changed its focus from manufacturing instruments to importing them. No longer in need of as much space, the company moved operations to the Howard E. Pepper building (named after J.W. Pepper’s son) at 33rd and Walnut St. This location represented both the growth of the city westward and the company’s focus on retail and print operations. These years saw a number of big changes in the way Pepper did business. Service was still the bottom line, but as time progressed, the publishing arm of the company diminished. In 1924, Pepper published its last new piece of music, choosing to focus entirely on retail. This change rendered the Walnut Street building unnecessary, and two years later the company sold it to the University of Pennsylvania. Today, it is the Moore School of Engineering and houses its own piece of history, the ENIAC – the first electronic computer ever built.

The company then moved to a more modest location on Sansom Street to focus on retail sales. Unfortunately, the following decades saw the company’s sales shrink, leading to hard times. The Great Depression only made the situation all the worse. In 1940, the company moved again, this time to 210 Broad Street. The move had little impact on sales, however, and the company continued to falter until it finally declared bankruptcy.

Upon hearing the company was in trouble, in 1942 a past customer of J.W. Pepper’s, Harold Burtch, pulled together a number of investors and purchased the company with the hope of reviving it. Two years after buying the company, Burtch moved the headquarters to 1423 Vine Street. It would remain there for almost 20 years. During those two decades, the Burtch family reinvigorated the company and brought it back to its place in the music community.

As the success continued, in 1963 Pepper moved once more to a building on 231 North 3rd Street. During the decade Pepper was headquartered there, regional expansion started once again. New offices opened in Atlanta in 1966, Troy, Michigan in 1968, and Tampa in 1970. Expansion continued for the next 50 years, and today Pepper has 12 locations across the United States, each of which focuses on a specific region of the country. These stores are active in their communities and the wider regions they serve, supplying reading sessions, attending conventions, and supporting local Music Education Associations. Each store has its own reference center where customers can view a wide selection of music and choose the ones they like. Reference centers are a great place to hold an in-service day, allowing music teachers to plan out their year in relative peace.

The Pepper headquarters would move again, out of the city and into the suburbs – first to Valley Forge in 1973 and then to Paoli in 1984. While in Paoli, Pepper took a number of steps forward in both mail-order services and incorporating technology. It was during this time that Pepper began using extensive computer systems to aid in order fulfillment.

Technology would develop quickly during the ‘90s and ‘00s leading to a number of changes in how customers ordered and received their music. Fewer customers came into the stores, choosing instead to place orders over the phone or on the internet. Recognizing this, Pepper made a number of changes to accommodate its customers. Call centers in both Paoli and Grand Rapids, Michigan ensured that customers would always speak to a Pepper representative when they called.

To better cater to these callers and online customers, the company opened two major distribution centers – one in Atlanta and one in Salt Lake City. By 2009, these massive warehouses were handling nearly every order placed with the company. This centralized system and the dedication of the distribution center staff has helped Pepper fulfill its promise to ship most orders the day they are placed. Getting customers their music quickly is a big part of Pepper’s focus on service. The distribution centers and the people who work there make that happen.

While the Paoli office served Pepper well as corporate headquarters for many years, the changing needs of the company led us to move once more to where we now reside on Sheree Boulevard in Exton, Pennsylvania. Our company has called many different buildings home, both here in the Philadelphia area where we began and across the country. What never changes is the kindhearted dedication to service you will experience no matter where you meet us.

Learn more about the history of J.W. Pepper:

A History of Service: The Pepper Catalog

A History of Service: Pepper Instruments

A History of Service: Editors’ Choice

A History of Service: Music Education

A History of Service: Bringing Musicians Together

and explore our interactive timeline.