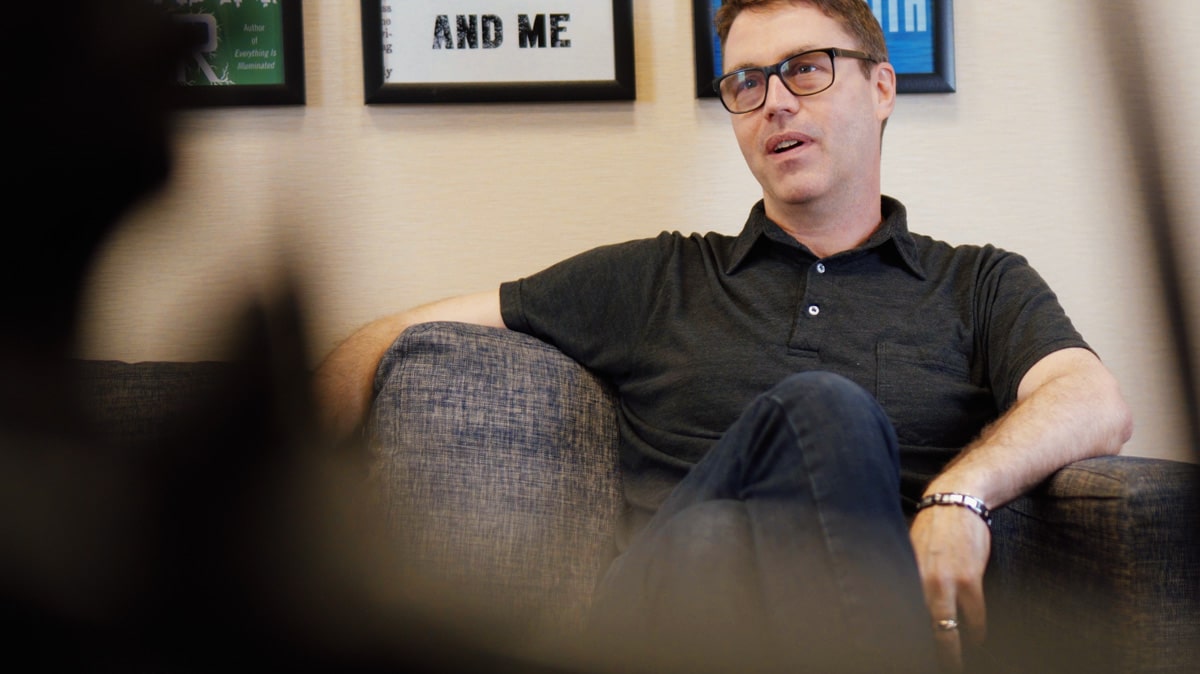 An Interview with a Cappella Guru Deke Sharon

It was at a television station in San Francisco, California, where Deke Sharon realized how far his work in a cappella music had reached. He went to the station to complete a satellite interview for an Australian morning show when he struck up a conversation with a gentleman who was there to talk with the national media about military drone strikes. Sharon said the man, who was dressed up in an “FBI suit” and looked very serious, had an outburst of joy when Sharon said he was there to promote the movie Pitch Perfect 2.

“He said, ‘You’re kidding me. Pitch Perfect is my favorite movie. That’s all I ever want to watch,’” Sharon said. “And I’m looking at this guy and thinking if he’s in love with this movie – wow. It’s crazy.”

Years before this day, Sharon had faced accusations that he was ruining a cappella music and was trying to “make a career out of tiddlywinks.” His enormous success as the producer of The Sing-Off, which launched the group Pentatonix, and as the music director of the Pitch Perfect films proved them wrong. However, it was his strong background in music and the reactions of audiences before these successes that convinced Sharon he needed to keep pursuing his ideas.

“I was basically an a cappella headbanger before I could even talk.”

Sharon was involved in music from a very young age. He was born and raised in San Francisco, and Sharon says his parents told him he sang himself to sleep while vigorously bouncing his head on a pillow.

“I was basically an a cappella headbanger before I could even talk,” Sharon said.

As a young child, Sharon used his musical talent to sing in a church choir and the San Francisco Boys Chorus, where he was the group’s youngest singer. Sharon toured with this talented chorus and performed with greats like Luciano Pavarotti. At the same time, Sharon said he also benefited from dedicated music teachers.

“I think a lot of high school and particularly elementary school educators don’t realize the incredible impact they have on young students,” Sharon said. “Because of the nature of music, teachers are dealing with students’ interpersonal and emotional development, which creates this incredible bond.”

One of these bonds for Sharon was cemented when a teacher cast him to lead the barbershop quartet in his high school’s musical production of The Music Man. Sharon enjoyed the group so much that he kept it together throughout high school. The young men liked to perform current music on the radio as well as older rock songs, but sheet music for these pieces generally relied on piano accompaniment – a cappella arrangements were scarce. In response, Sharon began to learn to arrange music for the quartet, and he took his work a step further after being inspired by a school assembly that featured the Beelzebubs, an a cappella group from Tufts University.

“It was like a shaft of light from the heavens,” Sharon said. “It hit me that a bunch of guys using their voices to create the entirety of the sound was so cool, and I wanted to do that.”

The Beelzebubs and the Birth of Contemporary A Cappella

Sharon enrolled in a joint program with Tufts University and the New England Conservatory of Music, majoring in third stream studies and jazz voice. He also joined the Beelzebubs. He immediately saw that collegiate barbershop groups all tended to sing the same songs, such as Blue Moon, The Longest Time and The Lion Sleeps Tonight. He bought a CD from the movie Say Anything because he wanted to arrange the song In Your Eyes. That was too difficult – at first. Sharon began notating what he heard, including vocals for five percussion sounds, and ended up with an 11-part arrangement. The complexity of the arrangement and the vocal instrumental sounds were unheard of at the time, and the Beelzebubs resisted singing it at first, but they finally performed it in Maine.

“It was like out of a movie, because we sang the song, and the audience was dead silent until the last chord rang out of the house,” Sharon said “The audience was still silent for almost too long, and then everyone leapt to their feet and were just screaming.”

The crowd reaction prompted Sharon to arrange more songs for the Beelzebubs and to keep pursuing this type of music that would eventually crown him “Father of Contemporary a Cappella.” But first, coming out of college, he dealt with many doubters – including people who, Sharon says, “laughed in my face.”

“It was the hardest working experience in my life. As hard as The Sing-Off was, there was this energy I was getting back from the singers, and I knew we were creating something beautiful – but with this movie, you didn’t know.”

Because of the hesitation to embrace Sharon’s music, he had to turn to small publishing companies to try to get his pieces in the public. One small publishing company that helped him went out of business, so Sharon eventually contacted publisher Hal Leonard, which made limited offerings of his music available until gradually the sales success became obvious.

“Everything that I would put out would be gobbled up because this was an entire rapidly growing community of musicians for whom almost nothing was published for them to sing,” Sharon said

It wasn’t until the production of The Sing-Off, though, that Sharon’s contemporary music really hit the mainstream public. The Sing-Off began as a movie idea, but it was transformed to a television competition show. Sharon was brought in to help with a cappella arranging but found the show needed a lot more help. He was made a producer, and with his assistance, the program was the highest-rated new show on NBC. The Sing-Off’s first opening number, Under Pressure, was so successful that large group numbers became the standard way to start the show. Over time, The Sing-Off launched many careers, including Sharon’s former Beelzebubs as the vocalists for the Warblers on Glee, the platinum-selling group Pentatonix, and country a cappella sensation Home Free.

Following on the heels of The Sing-Off, Sharon was asked to be the music director for a new movie called Pitch Perfect. The movie was based on a nonfiction book by the same name that included stories about a female a cappella group that encountered problems, like a competition judge at the college a cappella finals who disliked them. It was a low-budget film with a staff that was relatively inexperienced in movie making and a cast in which nine of the ten Bellas had not sung a cappella music, or even choral music at all. Sharon said they were working in an abandoned state building in Baton Rouge, Louisiana, and he “bled for that movie.”

“It was the hardest working experience in my life. As hard as The Sing-Off was, there was this energy I was getting back from the singers, and I knew we were creating something beautiful – but with this movie, you didn’t know,” Sharon said.

The movie had a limited release, but its popularity spread through word of mouth. In 2013 the movie’s album became the best-selling soundtrack of the year even though the movie had been released the previous year.

The Gift of Vocal Music Internationally and in Schools

The success of the first Pitch Perfect movie led to the release of Pitch Perfect II and then III. The second movie delved into the international aspect of a cappella by featuring a collegiate group that integrated South Asian music into contemporary a cappella. This was important to Sharon, who points out that a cappella is one of our oldest traditions. He notes that a cappella singing is at the heart of numerous cultural traditions throughout history, such as the Gregorian chant.

Sharon says a cappella is not a style of music, but just a choice to make music using only the voice. It can be adapted to any type of music, so the “sky’s the limit.” Sharon hopes this kind of music can “knit back the fabric of society” and allow people to connect with those who are different than themselves. Sharon also points out that humans are hardwired to sing, so music is fundamental to communication, religion, and education.

“I think a lot of high school and particularly elementary school educators don’t realize the incredible impact they have on young students.”

“The fact that choral music is considered a third-rate study in American schools is an absolute travesty. If you go back in time and you look at the ancient Greeks, Pythagoras believed there were five fundamental subjects that should be taught in school, and one of them was music,” Sharon says.

Sharon takes it even further by saying he thinks we save lives when young people decide to join choir since it often leads students to stay in school, while grades go up and bullying goes down. Plus, Sharon also notes that everyone can sing. He says matching pitch comes with practice, and teaching that skill allows anyone to join in what Sharon calls an “essential part of what it means to be human.”

“A synthesizer cannot make you laugh or cry within three seconds,” Sharon said. “The human voice is the most versatile, the most powerful and the most connecting instrument.”

For ideas on creating an a cappella group, view these tips.

View other contemporary a cappella music.

To hear more from Deke Sharon, see our Pepper playlist:

The Inside Voice
Changing Collegiate Traditions
Everyone Can Sing
A Cappella Is Not a Style, It’s a Choice
A New Musical Vocabulary
Pitch Perfect: A Cappella Goes Hollywood
The Sing-Off: A Cappella Takes Over TV