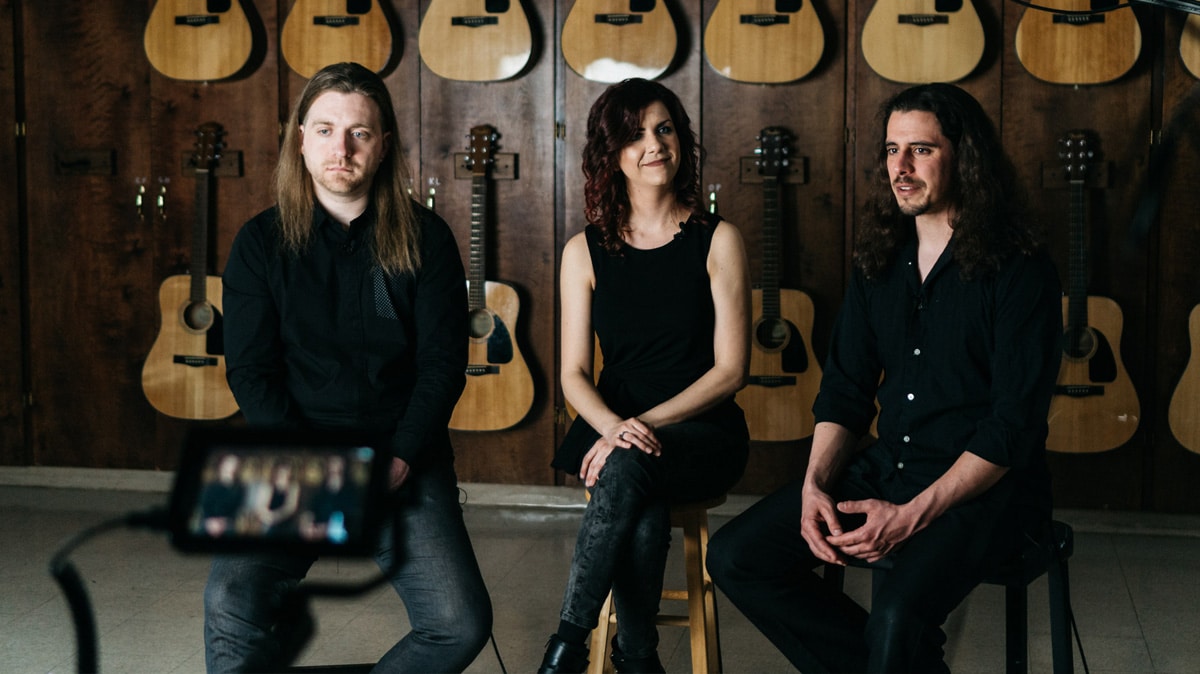 Two worlds collided for cellist Nicole Myers as she traveled back to her Pennsylvania high school to give a performance as a professional musician. She and her bandmates in a rock orchestra group called Cello Fury visited Ephrata High School on a rainy spring day for one of the many outreach concerts they do for schools. There she was greeted by her former cello teacher Galen Reed. Myers says Reed went above and beyond as an educator, including driving her to state orchestra events and supporting her work beyond high school.

“There’s something really lasting about a bond between a teacher and student,” Myers said.

These kinds of connections are what helped Myers and fellow cellists Simon Cummings and Ben Muñoz receive the training they needed to create Cello Fury nearly ten years ago.  The group allows them to combine their classical training with their interest in progressive music. The band plays rock orchestra music primarily composed by Muñoz and Cummings. To enhance the rock element, the group also added drummer David Throckmorton, who has an extensive background in jazz.

All four musicians started playing their instruments when they were children. The three cellists began playing in elementary school, and Muñoz was further encouraged by his mother, who is a cellist.  Throckmorton also had family musical influences since his father and brother are drummers. In addition, he and Myers both said they were inspired by school assemblies. Myers’ interest in cello was piqued when a high school group visited her grade school and introduced her to the cello. Throckmorton says percussion played during a school puppet show sparked his interest.

“During the assembly, a guy on percussion played cymbals and snare drums. I thought it was really cool, and it stuck with me,” Throckmorton said. “Many years later I was playing at a New Year’s gig, and a guy came up to me and said he enjoyed the band. And I recognized him because he was the guy from the puppet show.”

The chance meeting came after Throckmorton had played in hundreds of shows, including a world tour with jazz-great Maynard Ferguson. He settled in Pittsburgh, Pennsylvania when he started a family, and there he met Myers during a music rehearsal. She and the other cellists had completed college degrees in music and had formed Cello Fury to share their unique style of composition. They wanted to add a drummer, and Myers asked Throckmorton for suggestions. After trying other drummers, the cellists asked Throckmorton to take the role. It took some time to convince him, but Throckmorton eventually agreed to play with Cello Fury.

During shows, each cellist has a different part – melody, harmony or bass line – and they often change who has which part mid-song. The group uses electroacoustic instrumentation, which allows each cellist to maintain a unique acoustic sound with the added benefit of having electric amplification. Muñoz says the quality of the combined sound is crucial to the band’s success.

“Each part is so integral. We’re a very equal opportunity band,” Muñoz said. “There’s no leader of the band. Everyone has equal say and equal importance.”

When the group practices, they begin with just the cellos. Later they give Throckmorton a roadmap of each composition, and he makes key decisions about how the final piece will be played.

“I will listen once or twice and figure out the vibe. Then I’ll see what my ear is telling me to do, and I’ll put my own treatment on it,” Throckmorton said.

Generally, the cellists say Throckmorton serves as a “human metronome,” and they will follow the tempo he sets and the improvisations he makes during performances. In that way, they say Throckmorton is somewhat like a conductor, and his part adds a lot of excitement and energy to pieces.

Aside from the drums, the cellists also take liberty in their playing to create a rock sound. Cummings says the melody playing is similar to classical, but the vibrato is different, and they often stand up or move around.

“We’re constantly digging in harder because we’re playing loud,” Cummings said. “At least one of us is playing these low power chords on the bottom two strings, and you really have to play pretty hard in order to get that to sound the right way. So for that part of it, it’s super different than classical style.”

The cellists say to make this power chord sound they have to heavily use the part of the bow near the frog. Other techniques they like to use also include:

Cello Fury brings their rock orchestra music to 15,000-20,000 children each year primarily in the Mid-Atlantic states. Their program not only educates students about strings, but it often leads children to want to play. The group says there’s “a severe influx of new cellists” after Cello Fury visits schools and that current cello players often become the “coolest kid in school.”

In addition to the school year program, the band members also conduct a summer camp for string instrumentalists, and they each teach private lessons. During lessons, the cellists give students classical training and traditional repertoire, and they show them what they can do with the instrument in terms of composing and arranging.

Cello Fury also has traveled internationally to share their music. Muñoz says one of his most memorable moments with the group came when Cello Fury took a three-week tour of Italy and performed an acoustic set in a small town in Umbria, Italy.

“It felt like the entire little town was all lining the streets in Italy to hear us play, and it just kind of reminded me what music does for everybody and how it really is the universal language,” Muñoz said.

The group’s success is prompting the release of a third album in September. The band also is gearing up to attend more schools for the 2018-2019 school year.

“Giving back through our musical performances is really important because that’s how I got inspired to pick up the cello,” Myers said. “It was through a group of high school kids who came to my school and played for me, and I thought ‘wow the cello is so awesome,’ and it’s come full circle because now we’re able to not only make a living as musicians, but we’re able to hopefully inspire kids.”

For modern sheet music for strings, view our pop, rock and movie selections.

For resources on alternative methods and techniques, view these options.

To hear more from Cello Fury visit our Pepper playlist:

0:21 What is Cello Fury and how did they get started?
1:50 Where does the music come from?
2:38 Keeping the heart of classical music while adding a modern twist
2:57 Recording an album and collaborating with other groups
3:46 Adding a drummer
4:45 The difference between Cello Fury’s music and classical
5:34 The power of a live performance