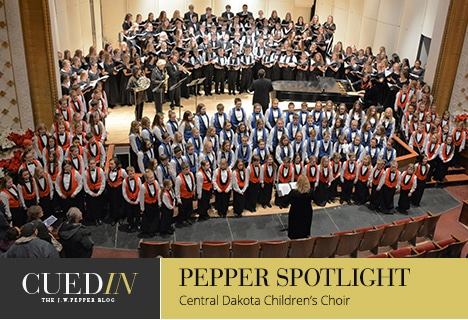 The Central Dakota Children’s Choir was born from a dream but became a reality through a true community effort. Karen Traeholt envisioned the creation of a children’s choir in the community as part of her project for the Leadership Bismarck–Mandan program. To meet the criteria of the proposal, music educators were surveyed, community music supporters met, and information about other children’s choirs was assessed. Once it was determined that a children’s choir was a viable possibility, a timetable was set up to make this dream come true. The Bismark–Mandan Junior Service League, a women’s organization committed to promoting voluntarism and improving the community through action and leadership, adopted the Central Dakota Children’s Choir as a project. This partnership provided financial assistance and volunteers and made the continued growth of this organization possible.

In 1998, a board of directors was established, and Teri Fay was hired as the founding director of that first choir of fourth, fifth and sixth graders. Karen served as their accompanist. The name of the group officially became Central Dakota Children’s Choir to reflect the regional membership. Soon thereafter, in 2001, Karen was hired as executive director and Teri was hired as artistic director.

Due to the great success of the choir during its first three years, the organization expanded to three choirs for the 2001–2002 season to include grades 3–9; Jubilate (grades 3–4), Bel Canto (grades 5–6), and Kantorei (grades 7–9). The fall of 2004 saw the addition of our fourth choir, Cantus, for high school students, and in 2005, CDCC added an additional high school treble choir, Angelica. In January 2011, CDCC introduced Singing for Second Graders as an introduction to the fundamentals of music. The Central Dakota Children’s Choir continued to grow, and in the fall of 2011 a new fourth to sixth grade choir, Cantabile, was established in Dickinson, North Dakota. In 2015, after working under the umbrella of CDCC for four years, Cantabile became an independent choir continuing to provide children in Dickinson and the surrounding areas a quality choral music education.

The vision of the Central Dakota Children’s Choir is “to inspire children to a lifelong love of singing through the performance of fine choral music” through their mission: “to provide a unique choral education and experience to the children of central North Dakota, to enrich the artistic community, and to serve as ambassadors for our state through music and education.” It is the goal of CDCC to maintain steady planned growth as it evolves into a strong organization which provides a nurturing environment where children aspire to their highest level of musical artistry and personal development.

The choirs of Central Dakota Children’s Choir are recognized regionally for their quality and have been invited, by audition, to perform at state and regional events. CDCC performs 30 to 40 times each year and is available for special events. They sing annually for 12,000 to 15,000 people.

Teri Fay, Artistic Director/Conductor
Teri is the founding director of CDCC and has also served as artistic director since 2001. She directs Bel Canto, a choir of fifth and sixth graders, and is also the founding director of Angelica, a treble choir for women in grades 9–12, which she led from its inception in 2005 until the spring of 2015. Most recently, she developed and teaches the Singing for Second Graders  and  Super Summer Singing classes. Teri’s vision for CDCC has taken it from one choir of 65 singers to seven different performing/teaching segments in the Bismarck–Mandan area.

Dawn Hagerott, Conductor
Dawn is the founding director of Jubilate, an entry-level choir of third and fourth graders. She also spent two seasons as the director of the Angelica choir from 2015–2017.

Tammy Rector, Executive Director
Tammy joined the staff in September, 2007 as operations director. In 2009, she was promoted to project manager, and in the fall of 2012 took on the additional duties of director of development. In the spring of 2015, she accepted the position of executive director following Karen’s retirement.

Amy Miller, Operations Director
Amy became part of CDCC’s staff in February, 2009. She is a Bismarck native. Amy has degrees from Bismarck State College and Alexandria Technical College. She has a strong background in customer service and design. Amy started as our administrative assistant and shortly after assumed the responsibilities of operations director.