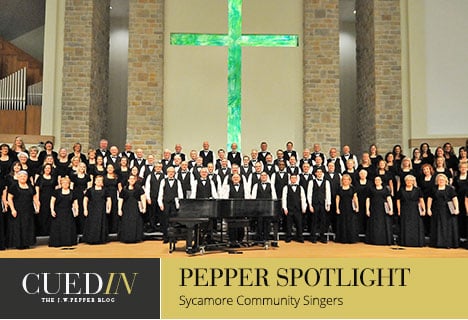 The Sycamore Community Singers is an auditioned adult volunteer community choir based in Cincinnati, Ohio. Founded in 2016 by choral director Linda Gartner, the SCS performs sacred and secular vocal music with emphasis on excellence, camaraderie and fun! They have regular concerts in December and June. Recently, 40 members of the choir embarked on a ten-day performance tour of Austria and Germany, which included Salzburg, Rothenberg, Regensburg, and Munich. The Sycamore Community Singers have also been invited to participate in the Distinguished Concerts International New York (DCINY) concert project at Carnegie Hall in February 2020. The performance will be a major collaboration with composer and conductor Mack Wilberg, director of the world-renowned Tabernacle Choir at Temple Square, formerly known as the Mormon Tabernacle Choir. This concert will be a celebration of Mr. Wilberg’s music and will feature a full professional orchestra and a massed chorus made up of choirs from across the country.

Alex Thio has served as the accompanist for the ensemble for almost 18 years. He is a graduate of the University of Cincinnati College‐Conservatory of Music and is a piano performance and music theory teacher in the Cincinnati area.

Sounds of the Season December 2017

It’s a Grand Night for Singing from “State Fair,” arr. Rubino; Old Devil Moon from “Finian’s Rainbow,” arr. Mac Huff; Anything You Can Do from “Annie Get Your Gun,” arr. Anita Kerr; Seize the Day from “Newsies,” arr. Roger Emerson; Wheels of a Dream from “Ragtime,” arr. John Leavitt; All I Do Is Dream of You from “Singing in the Rain,” Herb Brown & Arthur Freed; Can’t Take My Eyes Off of You from “Jersey Boys,” arr. Ed Lojeski; Popular from “Wicked,” Stephen Schwartz, arr. Mac Huff