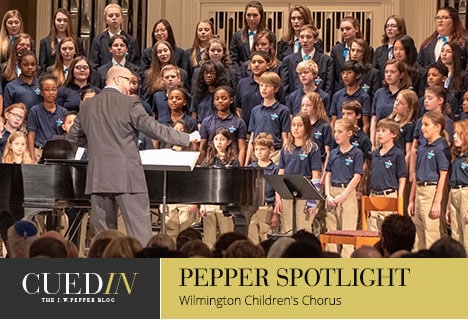 The Wilmington Children’s Chorus is an exceptional and diverse children’s choir that serves the greater Wilmington community of Delaware.

The Chorus was founded in 2002 through a collaborative partnership with Cityfest, Inc., led by Tina Betz under the administration of then-Mayor James M. Baker and founding artistic director David Christopher. The choir remains a project of Cityfest, the nonprofit arm of the Mayor’s Office of Cultural Affairs, and is supported by generous individual donors, other civic and corporate sponsors, and the Delaware Division of the Arts. The Wilmington Children’s Chorus is made up of over 300 singers ages 5 to 18 in six performing ensembles representing all genders and races. The curriculum emphasizes music literacy and beautiful singing as well as building life skills including commitment, teamwork, and leadership. The performing ensembles of the Wilmington Children’s Chorus include two Youth Choirs for treble singers that focus on building music literacy through the study of unison and two-part repertoire; the Select Choir which provides an opportunity for the treble singer to grow to a high level of skill and artistry; the Young Men’s Ensemble which is designed for boys with changing or changed voices; the Concert Choir, which is a four-part SATB choir comprising selected high school members of the Young Men’s and Select Choirs; and the Chamber Choir, an auditioned group, which comprises high school members who demonstrate a strong commitment to vocal growth and music literacy. Additionally, the Neighborhood Choir program, a collaborative project with OperaDelaware, provides free choral music education to youth from underserved communities through partnerships with three elementary after-school programs in Wilmington.

The mission of the Wilmington Children’s Chorus is to nurture and develop an exceptional children’s choir for the Greater Wilmington area and to share a love and desire to excel in choral singing, performance, and musical knowledge. They join voices to spread hope and harmony throughout our city, state, and world through a dedication to artistry, teamwork, and service to others. The Wilmington Children’s Chorus is committed to uniting diverse youth and families by providing free and open access to any qualified child, regardless of financial or social background.

As “The Singing Ambassadors of Wilmington,” the organization has shared its music, principles and accomplishments with tens of thousands of people throughout the mid-Atlantic region.

The WCC faculty are respected professionals with a wealth of experience in music education, voice pedagogy, and performance. WCC interns assist the staff by providing mentoring to younger choristers while gaining valuable leadership and education experience.

The artistic director of the Wilmington Children’s Chorus since the 2009-2010 season has been Kimberly Doucette, who has been an integral part of the artistic staff since 2005. Holding bachelor’s degrees in music education and voice performance from Pennsylvania State University and a master’s degree in voice performance from the University of Delaware, Ms. Doucette has served as a presenter, clinician, and adjudicator for the American Choral Directors Association and was the Community Choir Chair for Delaware ACDA from 2011-2018. She maintains an active private voice studio for singers of all ages and has developed a vocal study curriculum designed for younger singers that emphasizes the development of music literacy in addition to vocal technique. An active performer and soloist, Ms. Doucette has appeared on stage and in concert throughout the region, most notably with OperaDelaware, Delaware ChoralArts, and the Clifford Brown Jazz Festival.

Philip Doucette has been the assistant director of WCC since 2009 and served as chorus manager from 2005-2015. Mr. Doucette is the director of WCC’s Young Men’s Ensemble and co-directs the other ensembles. He holds a Bachelor’s of Music in Voice from The College of New Jersey, a Masters of Music in Voice Performance and Pedagogy from the Pennsylvania State University, and a Master of Arts in Communication Disorders from West Chester University, specializing in the connections between music, language, and the brain. Mr. Doucette has presented on the development of the adolescent male singer. In addition to being a licensed speech-language pathologist employed in the Christiana Care Heath System, he is recognized in the field as a singing voice specialist and has built a reputation as a respected and versatile voice teacher.

Lianna Magerr joined the Wilmington Children’s Chorus in 2007 as a member of the choir. She spent her high school years as a dedicated member. Later, she became an intern, when she had the opportunity to share her love of education and music with Youth Choir. Now manager of operations, Ms. Magerr continues to work closely with the children of WCC, hoping to inspire the youth of Delaware to be their best selves.

Repertoire of the Wilmington Children’s Chorus: