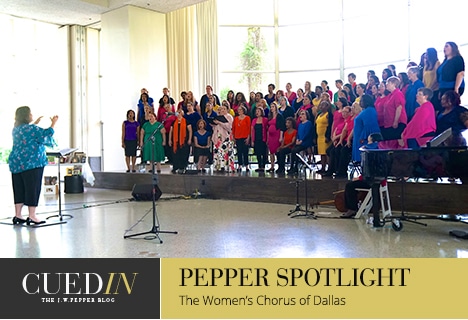 The Women’s Chorus of Dallas is recognized as one of the nation’s finest women’s choruses. Founded in 1989 with an initial membership of 35, the Chorus has grown to over 100 members, performing three mainstage concerts and several outreach performances each year. The vision and mission of the Chorus are: to be recognized as a choral ensemble providing musical excellence; to promote the strength, diversity, and empowerment of women by performing high-quality music to entertain, inspire, and serve the community; and to contribute positively to the community through entertainment and the support of women’s causes.

The Women’s Chorus of Dallas’ history is crucial to the gay and lesbian community in Dallas. Early members speak of how the Chorus emerged as one of few safe spaces to be fully themselves. For some, the family they made with each other was their only family. Today, the Chorus welcomes a diverse group of self-identified women – regardless of age, race, or sexual identity – lending their voices to support a range of causes, including the Dallas AIDS Walk. In addition to several outreach performances a year, each of their mainstage concerts can reach an audience of 600-750.

The ensemble’s musical prowess has blossomed under the direction of Melinda Imthurn, in her 13th season as Artistic Director. They have performed before Queen Elizabeth; at the inaugurations for Governor Ann Richards and Dallas Mayors Ron Kirk, Laura Miller, and Tom Leppert; and backup for Demi Lovato in addition to recording 11 albums.

The Women’s Chorus of Dallas serves the community through their relationships with other organizations around Dallas that serve causes such as addiction recovery, mentorship for families in crisis, senior care, resources for teenage and single mothers, homelessness, and family violence. By providing 200 tickets for each mainstage concert to these community partners, with onsite performances at closed facilities or for those with less-mobile clientele, the Women’s Chorus of Dallas aims to make life-enriching music available to those who need it, believing that, “when times are tough, music can help make life worth living.”