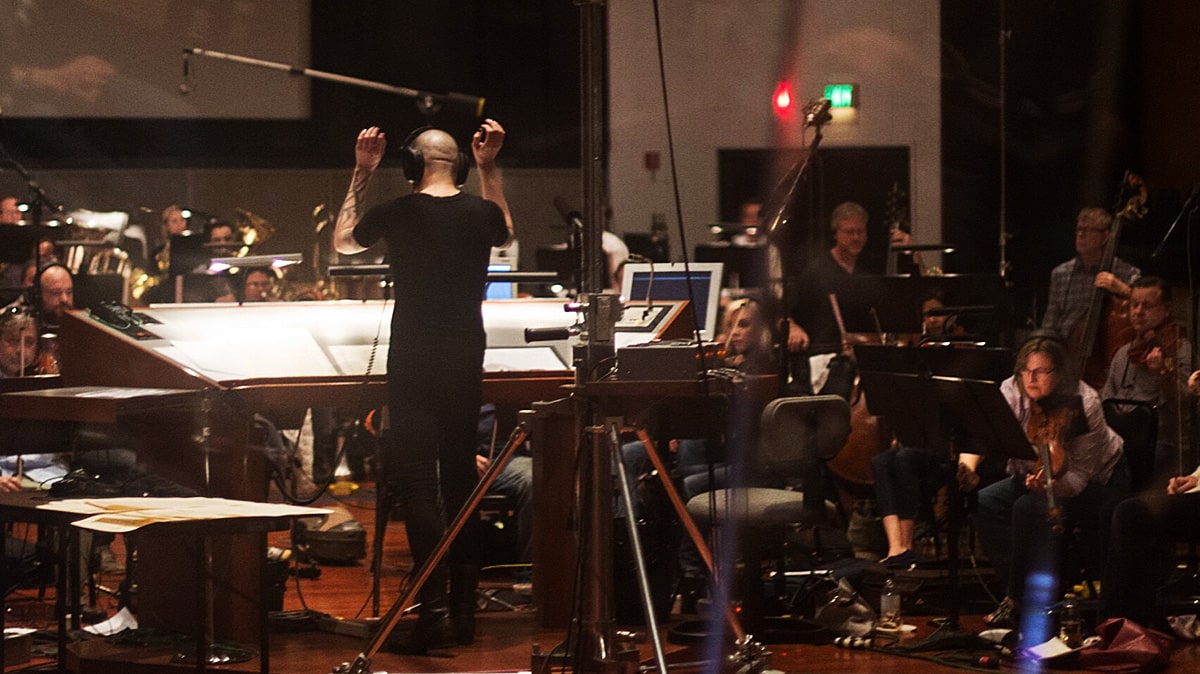 Horror movies don’t just play on the minds of the audiences. They’re also a cerebral project for horror music composers like Joseph Bishara and Christopher Thomas. Bishara has composed music for the Insidious and The Conjuring franchises and Thomas for haunted amusement attractions and film productions. Both have spent hours, days, and months formulating ways to create unnerving sound tracks – a job that gives them a unique perspective on the world of fear.

For Bishara, the composition process begins with sounds he envisions in his mind. Then he says he tries to translate what he mentally hears into musical compositions. That leads to him utilizing some pretty unique instrumentation in his pieces. Thomas gets many of his ideas from listening to the environment. He seems to have a knack for finding the hinges in a window that need oil or other environmental sounds many of us ignore.

That idea of finding the “right sound” and the instrumentation to create it is a specialty in horror music composing. Here are just a few examples from some of the most famous horror compositions:

As time progressed, synthesized electronic sounds became a big part of horror music creation, setting the foundation for movies like Halloween and television shows like Stranger Things. There also are moments when the absence of music creates just the right anticipation. These trends haven’t pushed other instrumentation to the wayside; both Bishara and Thomas say they use a combination of electronic and acoustic sounds in their works.

“I was imagining beings moving through dimensions, and that had a brass sound to me.” -Joseph Bishara

Bishara learned trumpet as a child and then branched out to the keyboard and guitar as well. He has enjoyed playing in bands but says he always knew he wanted to write. As a big fan of horror movies, he found his home as a horror music composer and producer and as a creative performer. He is best known for his collaborations with director James Wan. Bishara scored Insidious 1, 2 & 3 as well as Insidious: The Last Key. He also worked with Wan on The Conjuring 1 & 2 and won an ASCAP Top Box Office Films award for his compositions in director John Leonetti’s The Conjuring prequel film Annabelle.

Wan also cast Bishara as the Lipstick-Face Demon for the first Insidious film when he realized Bishara had the right build for the part and found Bishara played the role well. Bishara later was cast as Bathsheba in The Conjuring, as well as demons in Annabelle and Annabelle: Creation.

On the music front, Bishara says his creative process is a bit different for each film, with some composing starting as soon as an idea is shared and other pieces coming down to the final cut. In Insidious, some recording was done even before filming began.

Bishara can’t quite describe just how he does his renowned avant-garde work. He says he just hears the music in his head and doesn’t have a formula to create it.

“When writing, I try not to think in technical terms. I let go of technique during that part of the process,” Bishara said.

In Insidious he used a rusty piano, hammer and files to create some musical sounds. Another instrument he described is a bit hard to imagine, using guitar strings and metal pieces.

Like many movie composers, Bishara does create a signature sound for each movie to tie it together. The brass instrumentation used in The Conjuring came from how Bishara envisioned the menacing paranormal presence that is the centerpiece of the movie.

“A big part of the sound came from the early writing, with a piece called The Soaring Entities. I was imagining beings moving through dimensions, and that had a brass sound to me,” Bishara said.

Listen to Bishara’s The Soaring Entities track for The Conjuring here.

For Thomas, much of his horror music composing is centered on timing. He is a cellist by training and an orchestral composer who fell into creating horror music after he attended the Los Angeles Haunted Hayride. He waited in line for an hour and half and grew quite tired of hearing the same synthesized music sample looping over and over again in the waiting area.

Thomas thought he could do better and called the customer hotline for the attraction. The owner met with him, and she agreed that having music composed for the attraction would improve the experience. After composing music for the hayride, other amusement offers followed. Each composition had to be timed to ensure the right musical effects at the right moment.

Thomas used that talent in several film and television projects, including the short animated film Cadaver starring Christopher Lloyd and Kathy Bates. In his horror work, Thomas says he often relies on the unexpected.

“Straightforward harmonic use can be really terrifying,” Thomas said. “The simplest things can be the scariest when it’s so wrong to have that music there.”

One example of this was when Thomas crafted a work called the Cookie Monster Song as a theme for one of the rooms in a New York exhibit on serial killers. The song includes child-like singing and an eerie tone.

The Psychology of Horror

UCLA professor Daniel Blumstein conducts research in the fields of ecology and evolutionary biology and has studied sounds that produce fear. He fell into this research when a baby marmot scared him when it screamed while he was holding the small animal in his hand. He has found that sounds that mimic animals in distress cause a biological response. These sounds are noisy and nonlinear – often with rapidly changing frequencies that create sounds that are perceived as being distorted and raspy. Upward frequency shifts in particular have been found to elicit an emotional response. In general, Dr. Blumstein says that “across species, noisy sounds are scary.”

In a small survey of musicians, Pepper found that participants expected dissonance, high-pitched frequencies, sudden dynamic changes, minor chords, screechy sounds, and unexpected sounds in horror music. Many reviews of horror music refer to these sounds, in addition to some of the more biologically based techniques that Dr. Blumstein’s work suggests are quite effective, including the commonly used heartbeat sound.

But as Bishara suggests, it can be hard to define how or why horror music scares us. Bishara describes it in broad terms, saying his compositions depend on him “feeling out the energy differences” in a movie. For Thomas, his advice to anyone wanting to try horror music composition is simple. He says a composer should say “set me loose” and then leave the rest to the imagination.