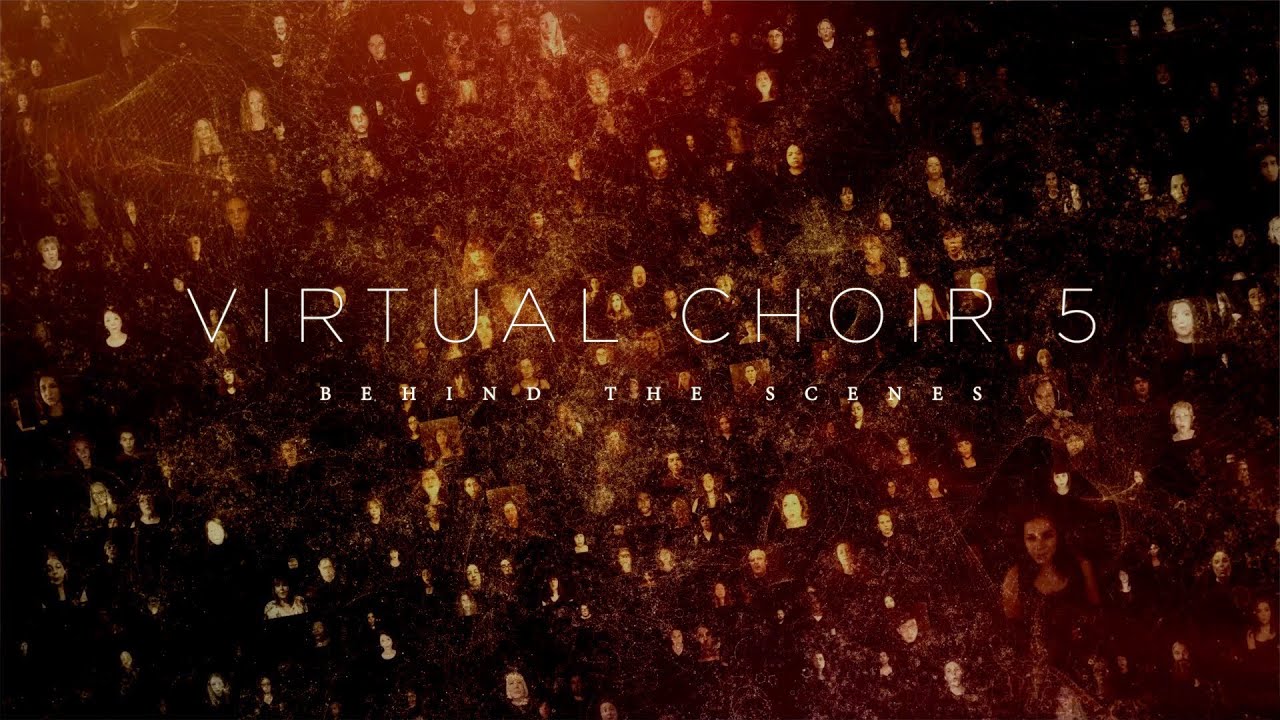 July 2020 Update: Eric Whitacre’s latest project – Virtual Choir 6  – is now available online and you can view the sheet music for Sing Gently here. The article below explains some of the history and technical aspects behind the virtual choirs, centering on Virtual Choir 5.

Voices from 120 countries unite in one of the most powerful moments in composer Eric Whitacre’s film Deep Field. After the viewer travels through the cosmos via a stunning array of Hubble Space Telescope images, the time comes to return to Earth. At that moment, 8,000 voices ring out above Whitacre’s moving orchestra music. They represent the largest group to sing in one of Whitacre’s “virtual choirs,” and many participants said they were moved to tears when they saw how the final film represented humanity.

“This virtual choir helped me feel the closeness of my identical twin sister who passed away in 2002,” Shirley Butterworth said. “We used to sing together all the time, and it’s one of the things I miss about her. Now, I always think of her as being a part of the stardust of the universe, so I feel like she is out there singing with us every time I watch the film.”

Such poignant moments were also experienced by others, who talked about goosebumps and a feeling that they aren’t alone – even though each virtual choir project begins with people essentially working by themselves. Participants individually video record themselves singing a Whitacre composition. Then through the magic of technology, all of the audio is synced to make it sound like participants are standing shoulder to shoulder singing together. When you see the creative use of all the individual video images on the screen, you know that you are listening to something different.

How the Virtual Choirs Began

The concept was born ten years ago after a young lady named Britlin Losee sent Whitacre a video of herself singing his composition Sleep. Whitacre says he wondered what would happen if he put together videos of different people singing the same piece. He announced a request for other people to record themselves singing Sleep and then tried syncing them. After the experiment seemed successful, Whitacre launched Virtual Choir 1 – a performance of his composition Lux Aurumque.

“I really didn’t even know if it would work musically,” Whitacre said. “When I first saw Virtual Choir 1, I was struck by the poetry of it all – these people isolated on their islands around the world coming together and making something much larger than their individual selves. I was not prepared for that.”

Virtual Choir 1 included 185 singers from 12 countries. Whitacre had recorded himself silently conducting to help singers perform the piece at the same tempo and to assist with vocal entrances and cutoffs. He repeated that effort when he launched Virtual Choir 2 – a performance of Sleep. For that choir and each subsequent one, the numbers multiplied with more people from more countries participating. It was with Virtual Choir 2 that Whitacre’s manager, Claire Long of Music Productions, took the role of executive producer for the choirs, and her team worked together to tackle the unique creative and technological tasks involved in each project.

For Virtual Choir 1, volunteer Scott Haines did the technical work involved. He had five gigabytes of audio from 243 videos to mix. Some performers recorded themselves singing more than one part, so the number of videos surpassed the number of people. Video images also had to be cropped and utilized, and noise reduction was used to remove extraneous sounds ranging from doorbells, ringing phones and aircraft to crickets and birds. For subsequent virtual choirs, designer and developer Damien du Toit was brought on board to handle the increasing technical needs.

By Virtual Choir 3: Water Night, the number of videos had grown to 3746, featuring 2945 singers from 73 countries. J.W. Pepper jumped aboard to sponsor this virtual choir to help tackle the larger scope of the project. A support team consisting of volunteers in different time zones helped participants with challenges ranging from technology to language barriers. Jack Rowland served as the choir’s community support team leader and found it surprising how connected he became to the choir members.

“I have lifelong friends – some of whom I’ve never met and may never meet – but I feel so close to them because of these projects,” Rowland said.

While staff members and volunteers coordinated the choir participation, the technical challenges also mounted with each choir project. One of the biggest struggles was the human tendency to procrastinate. For Virtual Choir 4: Fly to Paradise, more than 5000 of the videos submitted came in the last five days before the deadline. On the deadline day itself, 2400 videos were uploaded. There was so much traffic that the server came under tremendous stress; the team had to disable their streaming tool and instruct people how to do file uploads.

The audio file for Fly to Paradise had grown to 500 GB. That, combined with the video, meant the project needed terabyte-size hard drives for storage. Fly to Paradise also featured animation and an electronica track that required the work of a professional team, and it included multiple solos. 400 people auditioned via the internet over a period of five days for those solo spots.

The same year Fly to Paradise was released, Whitacre joined with Disney to create the World of Color Honor Choir with singers from all 50 U.S. states  performing Glow. A year later, a virtual youth choir was created. Then things went somewhat quiet in the world of Whitacre’s virtual choirs until 2018.

The Development of Deep Field: The Impossible Magnitude of Our Universe

In our previous blog about Deep Field, we shared details about how the movie was made and interviewed many of the principals on the project at its premiere in November 2018. This film combined Whitacre’s orchestral work Deep Field with actual images captured by the Hubble Space Telescope – an enormous task that required 18 months of scientific and artistic work.

Whitacre’s orchestra piece concludes with a choir singing. For the film, it seemed appropriate to turn again to a global virtual choir. Whitacre wanted Virtual Choir 5 to be as inclusive as possible. Therefore, for this one, the ability to read music was not required – neither was singing experience.

Whitacre simplified the music so people who have not previously performed in a choir could participate. This included those with disabilities or other barriers to choral participation. The final choir had singers ranging in ages from 4 to 87. Among them are singers from NASA and the European Space Agency (ESA), including some astronauts and scientists who worked on Hubble. On the technical front, mobile platforms were added to help people who may only have access to mobile devices.

Rather than providing a conductor video, Whitacre sat down at a piano and played the notes in the virtual choir tutorials. His team also added opportunities for participants to earn badges for completing fun STEAM challenges. In addition, a scientist named Dr. Daisy Fancourt from University College London began investigating how people experience virtual cultural events and how that may affect their well-being.

“I have lifelong friends – some of whom I’ve never met and may never meet – but I feel so close to them because of these projects.” – Jack Rowland, Team Leader, Virtual Choir Community Support

Forever Friends Made Through Virtual Choir

The research came after participants began revealing how they were making friends through social media, online forums and emails with other virtual choir members – and how just performing with the group gave them a sense of connection. Whitacre talked about those connections when he spoke at a TED conference in 2011 and shared a message posted by one of his members that said in part:

“It is a dream come true to be a part of this choir, as I’ve never been a part of one. When I placed a marker on the Google Earth map, I had to go with the nearest city which is about 400 miles away from where I live. As I am in the Great Alaskan Bush, satellite is my connection to the world.”

After Virtual Choir 5, more performers shared their appreciation for both the movie, which they described as hauntingly beautiful and riveting, and this choir that was geographically so far-reaching. Messages came from new and seasoned virtual choir members, including:

Volunteer lead Jack Rowland admits he had mixed emotions about virtual choir at first. He said the sound was beautiful, but he worried that something was lost when people sing apart from one another like this. Over time, he realized that the virtual choirs are another way for people to feel connected through music.

Deep Field: The Impossible Magnitude of Our Universe