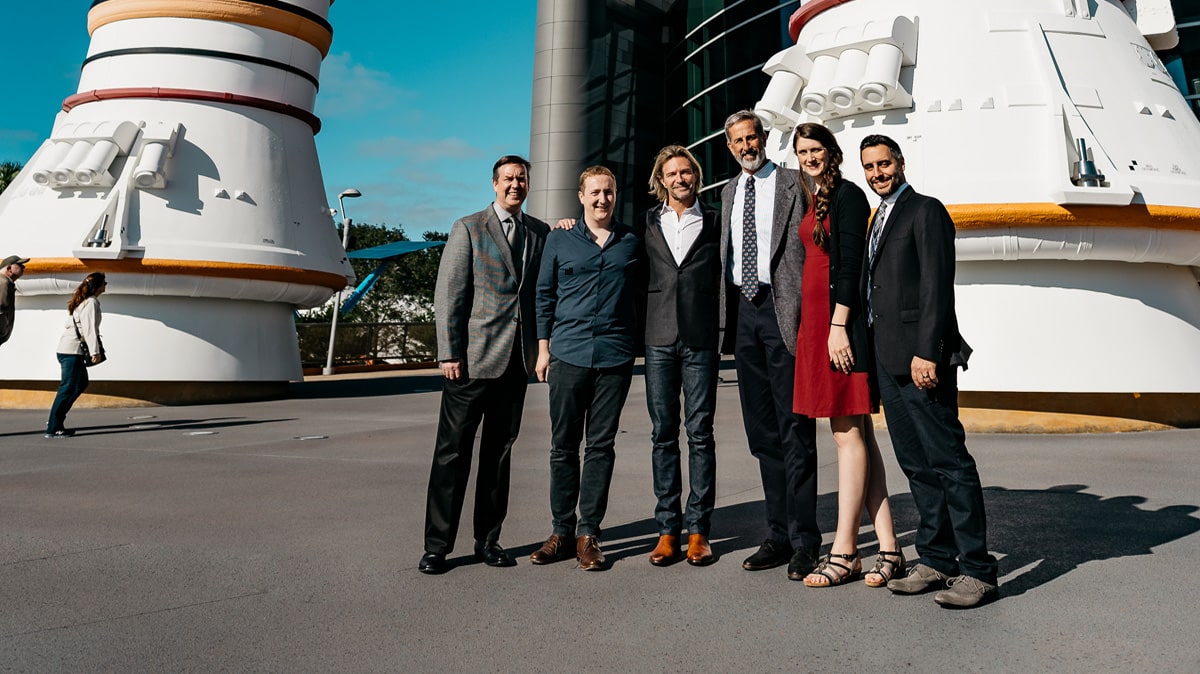 How Eric Whitacre’s “Deep Field” Movie Was Made

Composer Eric Whitacre delved into the visual world of film after he received an invitation he could not refuse. After conducting his Deep Field orchestra piece, which is based on the Hubble Space Telescope’s findings, he was approached by audience member Scott Vangen, a NASA payload specialist, who invited Whitacre to come to the Kennedy Space Center for a visit. Just a month later, Whitacre was there.

The visit set in motion an 18-month-long project that would bring together the best minds in science and the arts. The Space Telescope Science Institute (STScI) created a test video combining Whitacre’s music with existing Hubble visualizations and saw how beautifully they worked together. The staff shared a desire to collaborate and joined forces with Whitacre, Music Productions Ltd., and the filmmakers at 59 Productions to make Deep Field: The Impossible Magnitude of Our Universe.

Whitacre invited a camera crew from J.W. Pepper to come to the premiere of the film at Kennedy Space Center in November 2018. During that visit, Pepper staff captured the film presentation, along with educational interviews with project leaders that made it clear the film required a breathtaking amount of work.

“You’re not just looking at pretty pictures,” said astrophysicist Dr. Frank Summers. “You are looking at research-level astronomy brought up on the giant screen.”

Dr. Summers and other scientists worked closely with a large team of musicians and visual artists on the project, led by Whitacre’s vision. The composer’s fascination with space began when he was a child growing up in northern Nevada and continued when the Hubble launched in 1990. At first the images coming from Hubble were blurry; NASA made hardware and software fixes that led to a key event, which would compel Whitacre to create his composition.

“The power that is contained in that orchestra is like nothing I have ever experienced.”  – Eric Whitacre

The Inspiration for a Musical Masterpiece

In 1995, astronomer Dr. Robert Williams made a controversial request. He wanted the Hubble Telescope to be pointed toward a relatively small, seemingly empty area of space. The telescope remained pointed in that direction for 10 days, dozens of hours longer than it had ever remained put, and what it captured was astonishing. It recorded the first of what are now called Deep Field images, which include 3000 galaxies ranging from several million light years to 12 billion light years from Earth. In each of those galaxies it’s estimated there are billions to trillions of stars.

“We saw for the first time the impossible magnitude of our universe and how truly, truly small we are in it,” Whitacre said.

Whitacre wanted to write a composition about it and first used his young son’s sense of creativity to begin – sketching whatever pictures and words came to his mind. He aimed for the piece to be staticky and out of focus at times, like the Hubble’s first images were, but would then lead to the moment of clarity.

To do this, Whitacre created what he calls his “golden brick,” which is a fundamental musical idea the piece is based on. The chosen concept centers on a small group of notes that are used to build the foundation of a composition. For Deep Field, Whitacre focused on four main elements that were inspired by the men and women who built the Hubble telescope:

In addition to his “golden brick” themes, Whitacre used the Fibonacci sequence on both a small and large scale to craft his piece. He also utilized a choir towards the end to augment the composition. This gave him the opportunity to work with both his Eric Whitacre Singers and London’s renowned Royal Philharmonic Orchestra.

“The power that is contained in that orchestra is like nothing I have ever experienced,” Whitacre said.

During the work’s showcase moment when the Deep Field is revealed, Whitacre utilizes the piccolo and percussion to create scale and power. Whitacre says he used the piccolo the same way a movie director will have birds fly over a cathedral to give a sense of scale. The piccolo struggling to get above the sound of the orchestra gives an idea of how dynamic the music is at that moment.

Much of that power comes from the percussion section. Whitacre says his podium shakes during this portion when the composition is performed live. The managing director of 59 Productions, Richard Slaney, said that for the film they had to record some of the percussion separately in order to obtain a proper soundtrack mix.

The orchestra performed first without the tam-tam and bass drums. Then they sat silently while the percussionists did their part. Slaney, who previously worked for the London Philharmonia Orchestra, says it was a unique experience.

“We sat there for a nine-minute tam-tam crescendo with 150 people just sitting there thinking this can’t get any louder,” Slaney said. “It was louder than anything I’ve ever heard, and I’ve worked with lots of orchestras.”

Slaney said his staff had to work hard to find visuals to match the magnificence of that sound. They also had another challenge visually, which was the addition of a virtual choir that replaced Deep Field’s normal live choir at the composition’s end.  This virtual choir, the fifth Whitacre created, included 8000 voices from 120 countries. Each singer sang their parts at home, and film editors combined the individual videos to create a unified sound and unique visuals for the screen.

Here is an article with more details about the virtual choir.

“You’re not just looking at pretty pictures,” said astrophysicist Dr. Frank Summers. “You are looking at research-level astronomy brought up on the giant screen.”

STScI regularly transforms Hubble images to pictures and visualizations for the public, but this project gave them the unusual opportunity to create a much more extensive presentation.

“Hubble images are amazing. Everyone knows that,” said astronomer and visualization specialist Joe DePasquale. “The imagery and videos we  produce are all amazing things, but then to build something that is better than the sum of its parts was an incredible revelation to me and made me appreciate what we do even more.”

The process is painstaking. For scientific reasons, raw Hubble images are black and white; the visualization experts use information captured by the camera’s filters to create color. This includes the wavelengths and elements present, such as hydrogen and sulfur which have colors associated with them.

Turning those images to 3-D animations adds a whole new level of complexity. Distances, depths and sizes must be mathematically scaled. Animators deconstruct 2-D images and re-layer them to make them 3-D. STScI Project Lead Greg Bacon says the goal is to take the viewer through a journey in a new 3-D environment that draws attention to what is most important.

“For every Hubble image there are regions in it that we have scientific knowledge for, so we like to focus on those regions,” Bacon said. “We actually enhance them so people are focused on seeing those areas in the image.”

STScI visualizer Dani Player says animators will consult with astronomers to confirm how things should look – how much depth should be in a crevice or if an image is too bright or dim based on its distance. The job quickly gets out-of-this-world complex when the animation involves galaxies and other objects that vary vastly in their distances from each other.

The Moments When Complex Software Is Required

DePasquale say scientists wrote software to help identify galaxies in images, along with stars and cosmic rays, to determine their relative positions. In addition, Dr. Summers played a huge role in creating specialized rendering software; he began building a custom program 20 years ago to work on converting scientific data to visualizations.

Now, that software can process up to 100 million particles of data. Dr. Summers had to request exclusive access to processors in a server farm to create two sequences in the film – the Galaxy Traverse animation and the Whirlpool Galaxy.

“We pushed the boundaries with the visualizations for Deep Field beyond where they have been in previous large projects,” Dr. Summers said.

The goal is to make the animations be what the astronomers call “scientifically reasonable.” That enables the film to be as scientifically accurate as possible, though they admit there are a few parts when they allowed reality to be suspended:

The movie also ends with one special tribute – a moment when viewers can reflect on Carl Sagan’s book Pale Blue Dot, which talks about the foolishness of man’s self-importance when considering how small our world is: “this distant image of our tiny world.”

These types of images that put our reality in perspective give even the most experienced scientists a reason to pause, including Hubble Senior Project Scientist Dr. Jennifer Wiseman. At the premiere, she said projects like Deep Field allow scientists to step away and reflect on their work in a very different way. As she says for all of us, “It’s wonderful to bask in the beauty and the abundance of the universe.”

Looking ahead, we will have a Cued In article in February about the virtual choir and in March about the co-curricular strengths of projects like Deep Field. In that piece, we’ll delve into how some of the scientists’ backgrounds in music helped them with this project.

Spoiler Alert: The order of the animations in the film are listed below for those who want a little help identifying the images they are seeing on the screen. You can also view them on the Deep Field website.