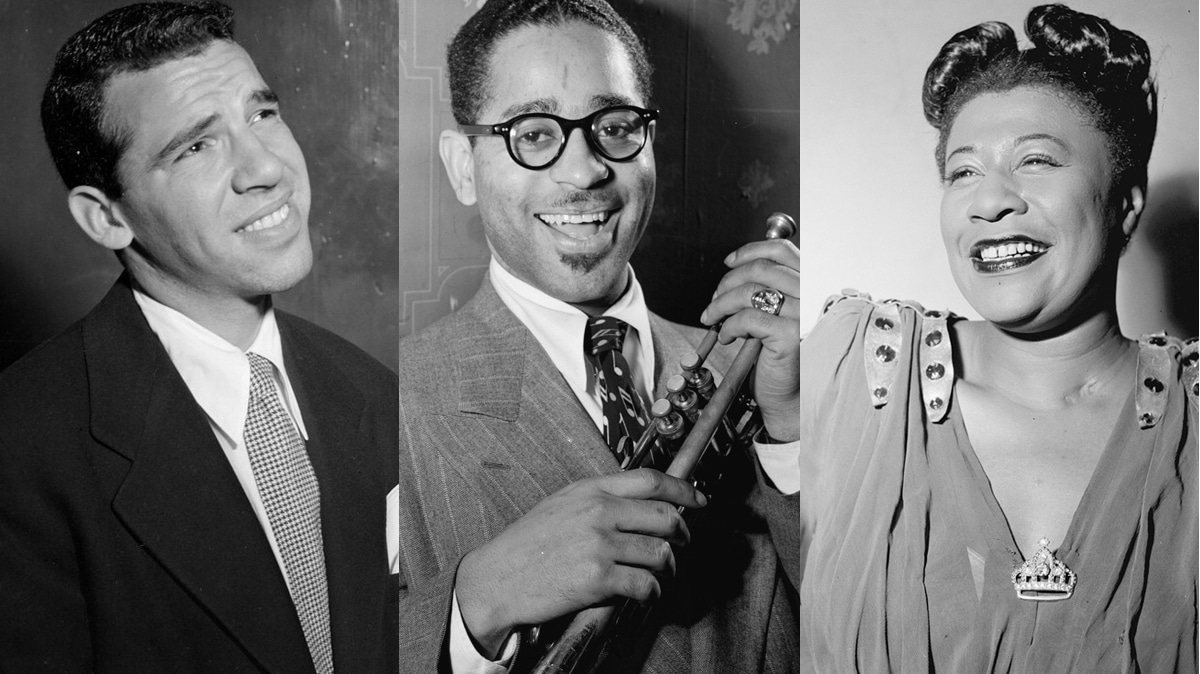 The year 1917 was monumental in jazz history, but not just because it was the year of the first official jazz recording. Some of the most famous names in jazz were born that same year. These musicians would stand on the shoulders of their predecessors, helping to make jazz the most significant American cultural movement of the century. To celebrate their centennials, Pepper is featuring a few of the most iconic songs from these jazz legends.

Dizzy Gillespie – Salt Peanuts
Gillespie is known as one of the creators of the jazz style called bebop. Among the most recorded and best examples of his style is a piece called Salt Peanuts. The song is a reworking of the Gershwin I Got Rhythm chord progression with a number of different connecting interludes. The title itself has no deeper meaning, but it mimics the drum lick played by Kenny Clarke at the start of the song. Gillespie sings the lyric between phrases played on various instruments, mostly following a bass drum hit. The song was so significant that its title became an unofficial slogan for the bebop genre.[1]

Ella Fitzgerald – A-Tisket, A-Tasket
Ella Fitzgerald was 21 years old when she found national fame through A-Tisket, A-Tasket. Singing with the Chick Webb Orchestra, she and Van Alexander used the well-known nursery rhyme of the same name as the basis for their song. Extending it into a full set of lyrics, the song that resulted spent 19 weeks at #1 on the US Billboard chart. Fitzgerald would go on to be styled as “the First Lady of Song” and “the Queen of Jazz,” while A-Tisket, A-Tasket was inducted into the Grammy Hall of Fame in 1986. [2]

Thelonious Monk – Straight, No Chaser
Jazz music thrives on straightforward musical concepts coupled with extensive improvisation and creative takes on similar themes. One excellent example of this principle is Thelonious Monk’s hit, Straight, No Chaser. The song is, essentially, a single idea played repeatedly, with each repetition of the theme having a different ending and beginning in a different part of the measure. The result is a shifting motive: a five-note motive starting just before beat 1, a seven-note motive starting just before beat 4, and so on. Using this simple concept, Monk was able to produce a very original and influential result. [3]

Mongo Santamaria – Afro Blue
Havana-born Mongo Santamaria was a major player in bringing Afro-Cuban rhythms to the world of jazz. His song Afro Blue was the first jazz standard built upon an African 3:2 cross-rhythm. This complicated rhythmic structure consists of six cross-beats per 12/8 measure. The best way to understand it, however, is to hear it. Pay close attention to how the competing patterns seem to contradict the meter while still managing to mesh as they are played under the flute and marimba melodies. Few musicians could construct a piece quite as unique as Mongo Santamaria’s Afro Blue. [4]

Buddy Rich – Channel One Suite
Not many people can say they were making a living on stage at 18 months of age, but that’s how old Buddy Rich was when he got his start in vaudeville. By the age of 11 he was playing as a band leader, making him the second-highest-paid child star in the world after Jackie Coogan. He carried on as one of the top names in music for his entire life, playing right up to shortly before his death in 1987. Fittingly, the last known recording of Buddy Rich and his band was a performance of Channel One Suite, his most famous song. Despite his nearly seven decades of playing, Rich never lost a step, a fact evident in any of his performances. [5]

Lena Horne – Stormy Weather
Starting as a member of the Cotton Club chorus line in 1933, Lena Horne was a standout personality in the jazz world for the better part of seven decades. In the first 20 years of her career, Horne went from young rising star on stage to the silver screen before finding herself blacklisted during the McCarthy Era because of her outspoken activism. While her career was damaged during that time, her place in music history had already been made, thanks in part to her rendition of Stormy Weather. Her version was a ubiquitous hit and was featured in a movie of the same name in 1943. And, while many big-name musicians have performed the song over time, it was Lena Horne’s version that was inducted into the Grammy Hall of Fame in 2000. [6]

What songs do you think of when you hear these iconic names? Let us know in the comments!

In celebration of this momentous centennial, the International Music Network is putting on a series of concerts featuring the music of Dizzy Gillespie, Ella Fitzgerald, Mongo Santmaria, and Thelonious Monk.