I’m Julia Anderson, J.W. Pepper’s copywriter. You’ll find my work among all the written communication we deliver to our customers, including jwpepper.com and the Cued In blog, promotional emails, landing pages, and newsletters. My musical background informs my role here at Pepper: I’ve played the flute and piccolo for most of my life, from elementary school through college and beyond. From honor bands and orchestras to marching band, pep band, and chamber groups, playing music has always been an important part of my life, so bringing my talents to the world of music education feels like a natural fit.

Here at J.W. Pepper, we’re best known for our sheet music business, and for good reason: in addition to stocking over one million titles, we offer a suite of software and services to make selecting repertoire, distributing it to your ensemble, and even selling your original work quick, easy, and convenient.

Sheet music, however, isn’t all we offer. Pepper also sells equipment and accessories, from reeds and mutes to large items including risers, carts, acoustical shells, and—as of this summer—a full suite of marching arts equipment! In 2022, we launched a Marching Arts product line which includes the full Director’s Showcase International (DSI) catalog. Now, marching band, color guard, and indoor percussion directors can shop our site for all the gear they need to take the field and floor.

Our creative team saw the company’s advance into the world of marching arts as an opportunity to venture outside our Philadelphia-area home base. Each region of the country has a unique marching band culture, and as a business with customers scattered throughout the United States and around the world, it’s important to include geographic diversity in our marketing materials.

Last month, I traveled from our Exton, Pennsylvania headquarters to Fishers, Indiana with J.W. Pepper Director of Photography Rocco Richardson. During our time in the Midwest, we took promotional photos and video of the highly competitive, 275-member Fishers High School Marching Tiger Band. With multiple appearances at Bands of America, several consecutive placements at the Indiana State School Music Association (ISSMA) finals, and an upcoming appearance at the Macy’s 2023 Thanksgiving Day Parade, the Marching Tiger Band is one of the best high school marching bands in the country.

Read the highlights from our trip and stay tuned for video content, including rehearsal footage and exclusive interviews with marching arts superstars Richard Saucedo and Chad Kohler.

After a smooth flight, we arrived at Indianapolis International Airport at 10:30 a.m. Scott McCormick, who lives and works in Fishers as Pepper’s senior educational consultant, met us there and brought us to our hotel. Throughout the trip, he served as our driver and guide.

Rocco and I got settled in our rooms and the three of us ate lunch at Fishers Test Kitchen, one of the many restaurants in the shopping center immediately outside the hotel’s entrance. The food court-style test kitchen hosts a rotating group of three eateries, offering chefs the opportunity to test new dishes and refine their menus. In a surprising coincidence, both Rocco and Scott had connections to one of the test kitchen chefs. Rocco recognized Fishers local and MasterChef winner Kelsey Murphy from her appearance on the TV show, while Scott’s daughter taught Kelsey’s children in preschool! 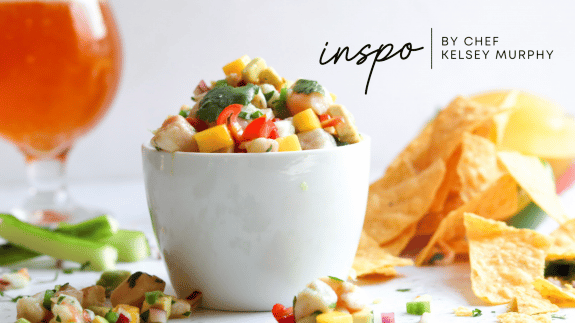 Our next stop was the sprawling campus of Fishers High School, where we visited the front office to sign in before heading to the music department in building nine. The band, orchestra, and choir rooms are impressive—music students at Fishers are fortunate to have such large, well-equipped rehearsal and performance spaces.

The first group we observed was the color guard. While many other high school color guards, especially those on the east coast, hold their rehearsals in the school’s main gymnasium, this is not the case at Fishers. Instead, we found them in a large group instruction (LGI) room dedicated to the performing arts. From the perimeter and the overhead observation window of the spacious LGI, we were able to see and record the proceedings from multiple vantage points. Students warmed up with a floor routine, then rehearsed flag tosses and choreography.

Are you surprised that these high schoolers had time for color guard practice in the middle of the school day? In addition to the luxury of space, Fishers marching arts students enjoy the luxury of time: members of the color guard get an athletic credit for being part of the group, so this rehearsal took the place of a traditional P.E. class!

Other schools would do well to follow Fishers’ lead by offering their students alternative ways to earn athletic credits. Color guard rehearsal is clearly great exercise: after watching these students, it’s easy to say that they got as intense of a workout as they would in a traditional P.E. class (perhaps even more so). While sports like dodgeball and kickball may allow students to warm the bench or fade into the background, each member of the color guard participates fully throughout the entirety of this class period. Plus, having time during the school day set aside for rehearsal is a boon to individual students’ well-being. With rehearsals taking place during the day, guard members get precious evening and weekend hours back to rest, study, pursue other extracurricular activities, or spend with friends and family.

Color guard rehearsal ended right on schedule, and the three of us took a short ride from Fishers High School to the beautiful home of composer, arranger, teacher, and band parent Richard Saucedo. Richard has traveled the globe as an adjudicator, keynote speaker, clinician, and guest conductor. He is an Educational Consultant for Bands of America and has worked with some of the world’s most prestigious marching ensembles, including the Blue Devils Drum and Bugle Corps in Concord, California and the Cavaliers Drum and Bugle Corps in Rosemont, Illinois.

We set up our equipment in the Saucedos’ spacious finished basement, immediately outside Richard’s music studio. Scott’s interview with Richard covered topics including Richard’s musical background, composition techniques, insights on teaching, and the ways that music education has benefited his children. Much like Jamey Ray and Derric Johnson of Voctave and the Voices of Liberty, Richard has been able to write music with individual players in mind, accounting for a given ensemble’s unique capabilities to shape each score. If you haven’t already, subscribe to the J.W. Pepper YouTube channel to see the full interview when it goes live!

Before capturing footage of the Marching Tiger Band’s evening rehearsal, we took in some local flavor—literally—by getting dinner at Portillo’s Hot Dogs, a beloved Chicago institution that recently expanded to the Fishers area. From the colorful, retro-style décor to the unusual toppings on the dogs and the crinkle-cut fries, dining here felt like an authentic Indiana experience.

Fishers is a recently developed, up-and-coming town: all our surroundings looked newly built, and we could see that the local culture is in the early stages of taking shape. Fisher High School is only 12 years old, and the school building features some smart design choices that would be excellent changes or additions for any school in a position to make improvements or remodel. One of these is the dedicated LGI space that keeps the color guard and front ensemble from having to share with other groups (such as a basketball team). Wide garage doors in the performing arts wing make it easy to move large instruments and equipment to the practice field, and a permanent band tower installed in the parking lot offers safety and convenience. It will be interesting to see how the area develops within the next several years—perhaps we’ll have the opportunity to return!

On the high school’s football field, we watched the wind section warm up, then saw the color guard, winds, and front ensemble (their term for the pit or auxiliary percussion) run sections of the field show before changing into uniforms for a full run through. The show, called “Chasing Starlight,” features selections from the third movement of Frank Ticheli’s “Symphony No. 2,” “Apollo Unleashed;” Nina Simone’s debut album, “Little Girl Blue;” and Steven Bryant’s “Radiant Joy.” The ensemble’s bedazzled bodysuits (pink and purple for the band and white for the color guard), star-shaped light-up props, and a sparkling woodwind feature created a captivating celestial effect. It was a chilly night—classic marching band weather—and watching these talented students made me nostalgic for my high school marching band days.

After a late night at rehearsal on Thursday, Rocco and I had the morning free on Friday to recover and explore our immediate surroundings.

We returned to Fishers High School in the afternoon and once again set up in the LGI, this time to capture footage of the front ensemble. This talented group includes marimbas, vibraphones, drum set, and upright bass.

The Fishers staff includes two band directors: Chad Kohler and Chris Dessent. Once the students finished rehearsing, we had the opportunity to speak with Chad. Our conversation covered rehearsal strategies, the ins and outs of the ensemble’s technical setup and electronics, and how the front ensemble fits in with the rest of the band and color guard. Like our interview with Richard Saucedo, this conversation is packed with exclusive insights you won’t want to miss! Keep an eye on our YouTube channel; we’ll publish the interview in the coming months.

After wrapping up our conversation with Chad, it was time to head outside again—this time to the school’s parking lot—where we took more photos and B-roll of the full band rehearsing, including drone footage!

To wrap up our time in Indiana, we enjoyed dinner with Scott and his family at the Grindstone Public House, an excellent restaurant in the nearby town of Noblesville. It was a pleasure to get to know Scott’s wife and daughter and celebrate a successful trip!

On Saturday morning, the only thing left to do was fly home!

Fortunately, our flight to Philadelphia landed early, giving us ample time to catch the Phillies’ victory over the Atlanta Braves: a key step towards their making history by appearing in the World Series for the first time since 2009. It’s a very exciting time for everyone in the Philadelphia area, including Pepper HQ!

We’d like to thank the staff and students at Fisher High School for hosting us. An important part of J.W. Pepper’s mission is to bring stories about the musical world to our audience, and it was our pleasure and privilege to tell the Marching Tiger Band’s story, get an inside look at Indiana marching band culture, and learn about the Midwest’s approach to music education.

We gained a great deal of insight from this trip and hope that you do, too! Watch our YouTube channel and social media pages for more, including color guard, percussion, and marching band content along with the interviews discussed above. In the meantime, check out some of our musical storytelling from recent years, including Music at Mount Vernon: A Replica of the Washington Family Harpsichord, Deep Field and Eric Whitacre’s Virtual Choir 5.

Would you like to see more travel blogs and videos from us? Where should we go next? Let us know in the comments!