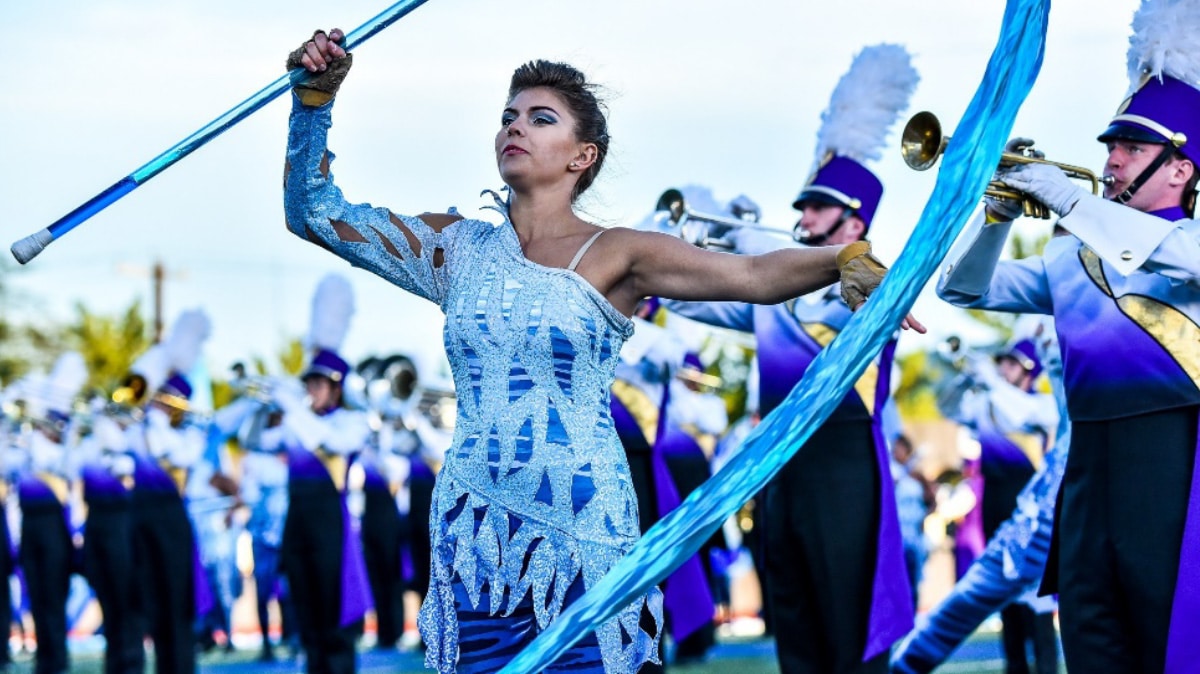 How to Plan Visuals, Formations & Choreography for Your Marching Band

The pressure to create visually spectacular marching band shows can be high in the age of short attention spans, reality TV competition shows, and social media.

Some large universities have met the challenge by creating exciting performances featuring drill sets with detailed picture formations and transitions. Many high schools have responded by incorporating creative and challenging shows. Regardless of the level of complexity, some basics need to be in place to help students entertain the crowds. Here are some ideas on how to help your students have the best marching experience possible

Todd Marcocci is the color guard director and choreographer for the marching band at West Chester University in Pennsylvania and has directed and designed innumerable parades and programs. He says he was first introduced to marching band when he was a young child watching a group prepare for a parade. The inspiration led him to join his school’s marching band, where he was fortunate to have directors who took him to Drum Corps International (DCI) competitions. He says that helped him see what was possible.

“At a young age, I realized what excellence was,” Marcocci said. “It can really pave the way for the future if directors take students to drum and bugle corps shows in the summer.”

It certainly also helps to give students hands-on marching opportunities at a young age. Edward Otto, who is the band director at Downingtown West High School in Pennsylvania, began his marching band experience at the junior high level. After that he pursued not only marching, but also learned from mentors how to design programs, which lead him to a professional career creating 350 shows and directing bands in several high schools.

Both Marcocci and Otto talk about how everything with marching starts with a vision and a plan.

“On a sports team there is a lot of sitting on the bench. In the band, everyone is a starter, so you are as strong as your weakest link.” – Band Director Edward Otto

The first step often is finding the big idea, whether it’s a story, theme or focus. For Marcocci, those central ideas for a halftime show or parade program come from his imagination, based on whatever inspiration he may find in nature or life in general. Sometimes he starts with visuals that send him searching for music, and sometimes it’s vice versa where he starts with music that needs visuals.

There are a number of new complete marching shows that can help set the musical stage for the visual process. Whatever idea you choose, remember to consider:

During the planning process, both Otto and Marcocci say it’s particularly important to think about your students’ ability level so that everyone can succeed.

“On a sports team there is a lot of sitting on the bench. In the band, everyone is a starter, so you are as strong as your weakest link,” Otto said.

This will be easier if the music showcases different instruments playing the melody at times, allowing students to have their featured moment. It also helps to select music that has various tempo, rhythm, or key changes that provide more visual and musical opportunities.

Once the idea is in hand and the music is set, make a general schedule from springtime forward. Otto says he considers logistics to be the hardest part and emphasizes the importance of keeping on task.

Once you’ve selected the theme and the music, the drill design process gets underway. Otto points out that some marching show ideas require research before they can be turned into full productions. As an example, he mentioned a show his band did titled “A Night with India” that included the country’s royal colors and other cultural details that were used to design front drops and portray streets and cities. As part of the process, he consulted with parents of Indian descent to get their input on the show’s visuals.

Regardless of the show, Marcocci cautions against over-choreographing to keep the drill as clean as possible. Here are some suggested basic steps:

For more help, you can use Pyware drill design software or view DVDs on marching band fundamentals.

“Ice skaters don’t just do a triple axel. It takes years of detailed technique work to get them on a path that advances their skills,” – Color Guard Director and Choreographer Todd Marcocci

When it’s time to teach the drill, Otto follows a system of alternating between older and newer members of the band during the drill – old, new, old, new. This helps the new members learn by modeling the more experienced band members.

Then, there are some basic questions that need to be addressed during drill rehearsal, such as:

To help with uniformity of movement, Marcocci recommends giving visual descriptions. For example, rather than just saying “lift your arm,” you might say “imagine a string a pulling your wrist towards the sky.”

A common practice that Otto recommends is using a metronome with a speaker system to help keep everyone on beat. Some directors use drones to video their band practice for later review.

One of the biggest focuses is teaching students where they should be in relationship to each other. Hash marks and cones can help, but generally, students who can assess their place in space will be able to fix errors more easily. Most important, students always need to know where they are going next. As mistakes occur, it’s generally better to stop periodically and fix them during a set rather than waiting until the end. Practicing mistakes creates bad motor memories.

“Make excellence a habit,” Otto said. “How the students practice is how they’ll perform.”

Marcocci and Otto are both big fans of having school bands perform in parades. It gives bands an opportunity to showcase their skill to a larger audience.

“A parade with 20,000 people on the road may be more significant than any crowd for a school sports team,” Marcocci said. “It’s a public relations tool – a chance to be an ambassador for the school and to showcase the school district. If I were a band director, I would make sure what we were presenting was top of the scale.”

For parades, the audience changes with every step the band takes. Otto recommends preparing a few set songs with a 110 or 115 metronome setting, including samples of marches. Then it’s good to have a plan for some kind drill that will give the crowd a visual show other than just marching forward. This may include a form within a form, such as having columns of people march through a shape.

To ensure success, Marcocci recommends finding a street with turns where the band can march. That is the best way to prepare for the width of the road and the necessary corners.

It also may help to add an element of surprise. Marcocci said when he directed a band in the Macy’s Parade, he received permission for the band to release confetti to simulate snow.

Whether it is a parade or a field show, Marcocci says in the end technique is most important.

“Ice skaters don’t just do a triple axel. It takes years of detailed technique work to get them on a path that advances their skills,” Marcocci said. “The biggest things are learned over time.”