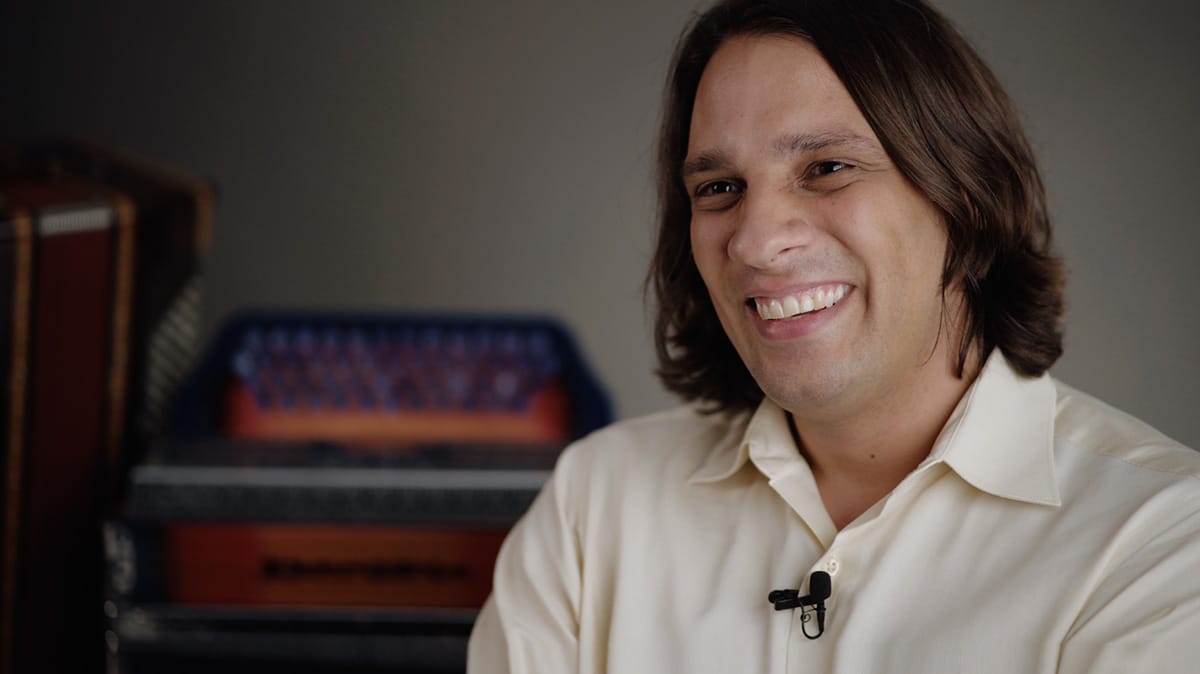 Roll Out the Accordion – Polka Music and Oktoberfest

Alex Meixner’s hands fly across his accordion when he plays crowd favorites at Oktoberfest celebrations across the country. The talented musician, who is known for the Hormel pepperoni commercials and his passion for the accordion, can play thousands of songs and has an encyclopedic knowledge about many styles of folk music. He began to learn how to play the accordion at age four; he now owns 14 accordions and travels with his band. Meixner says he loves how the accordion always gets a crowd reaction.

“The instrument is fascinating,” Meixner said. “One of the things I enjoy is going to elementary schools particularly. Kids see me  – pressing buttons, moving bellows, sounds coming out, sound changes – and it’s very tangible. The qualities of it are so attractive, especially for kids.”

Meixner says the popularity of the accordion has ebbed and flowed over time. In the early 1800s the accordion was adopted by traveling ministries in Europe after it was adapted from free-reed instruments from Asia. It was convenient to have a portable instrument that has such versatility.

“I can make it loud. I can create harmony. I can play melody, and I can play rhythm all together,” Meixner said.

Over time the accordion became a big part of the culture in many countries, including Austria, Germany and Hungary. Immigrants brought it to the United States where kids in many ethnic communities learned to play the accordion.

There were door-to-door accordion salesman and accordion orchestras. Sears, Roebuck and Company made an accordion model that many children were given for their lessons. Accordion players like Frankie Yankovic became stars. It remained popular until the 1960s when the electric guitar changed the music world. Meixner says the accordion then began to fade away until an unexpected development a couple of decades later.

“In the 1980s Weird Al Yankovic shows up on the scene, and he does parodies,” Meixner said. “Weird Al is a great musician and a fine accordionist. The parodies are not only funny, but they are witty.”

The exposure helped bring the accordion back to mainstream culture. Accordions began appearing in children’s shows like Dora the Explorer and The Wiggles. It also was used as an accent instrument for numerous pop songs. At the same time the accordion held onto its ethnic roots and remained a focus at numerous cultural festivals.

One of the biggest festivals that features the accordion is Oktoberfest. It began in 1810 in Munich, Bavaria, now part of southern Germany, when a big party was thrown to celebrate King Ludwig’s marriage. In Germany, the annual event begins the third week of September and ends in October. Meixner says in the United States the “everything German” celebrations are not restricted to those weeks. He says there are Oktoberfest festivals as early as August and as late as November.

Meixner says Oktoberfest celebrations in the United States often include more German songs than Germany’s festivals. Some American favorites have also joined the ranks at most events. Among the traditional songs that Meixner and his band commonly play are:

The Ins and Outs of an Accordion

During Oktoberfest celebrations and other events, Meixner uses both button and piano accordions. He says the most common type is the full-size piano accordion. It weighs about 29 pounds and includes 120 buttons and 41 piano keys.

The bellows supply air for the reeds, which are individually tuned. If one reed goes out of tune, it has to be removed for retuning or replacement. Meixner says the reed blocks are basically harmonicas. The complex structure of a piano accordion allows for the playing of full chromatic scales.

This is not the case with diatonic button accordions that include fewer rows of buttons. Button accordions are often used for Mexican music and in Austria, lower Germany, Slovenia and Ireland. The button accordion that Meixner brought for a demonstration includes microphones inside to amplify the sound, along with MIDI.

Hear Meixner talk more about the mechanics of his accordions.

“Music is a great way of introducing different cultures to people.”

The complexity of the instrument allows accordionists to play a wide variety of music, including compositions where the accordion may be the lead instrument and where it may be an accompaniment. The style Meixner plays the most is polka music.

The polka as a named dance came to prominence in the mid to late 1800s. It was based on a folk dance from an area that is now the Czech Republic, Slovakia and Poland. Meixner says lyrics were added to sell sheet music; eventually the lyrics were translated to German, a more common language, which allowed polka music to spread.

Early polka music relied heavily on brass instruments, not the accordion. That changed when polka music moved to the United States.

“A 50-piece brass band from a commercial standpoint starts getting to be a bit much,” Meixner said. “An accordion can cover all those different parts… so everything comes together in a fashion that the accordion became the lead instrument.”

One example is the zydeco music that grew out of Cajun culture and includes a fusion of blues. The chord structure in zydeco allows the accordion to create a driving rhythm that works for dancing, but was also used by slave workers in Louisiana while they were laboring in the fields.

Accordions also are sometimes used in mariachi music, stemming from the influence of Mexican Emperor Maximilian I who was Austrian. He received an accordion as a wedding gift, since court accordionists were common in his native country. Musicians found it worked well with indigenous guitars and other instruments that were eventually used to create mariachi music.

Accordions are also used in jazz and many other styles of folk music. Meixner says that “music is a great way of introducing different cultures to people.”

Meixner says accordion music, and folk music in general, was often passed down from generation to generation without being written down, so a crossover to education has been lacking. He is among the musicians who hopes to change that. He says with the accordion, you can start with a simple chord progression to help with the learning process and then evolve to more difficult combinations using a large variety of melodic and harmonic structures.

He says band directors can also include an accordion the same way a piano, keyboard or percussion is incorporated. Teachers likewise can use a variety of folk music resources to introduce styles like polka. In the end, though, Meixner says the accordion allowed him to learn other instruments, including the trumpet and keyboards, and that the accordion has provided one of the most important aspects of his music training.

“If you just have kids reading those notes, you’re missing the point,” Meixner said.  “You need to train their ears.”

And Meixner says one of the best ways to do that is to learn the accordion.

View sheet music for the accordion and the free-reed concertina.

Hear Alex talk more about Oktoberfest, folk music and the accordion in our Pepper playlist: