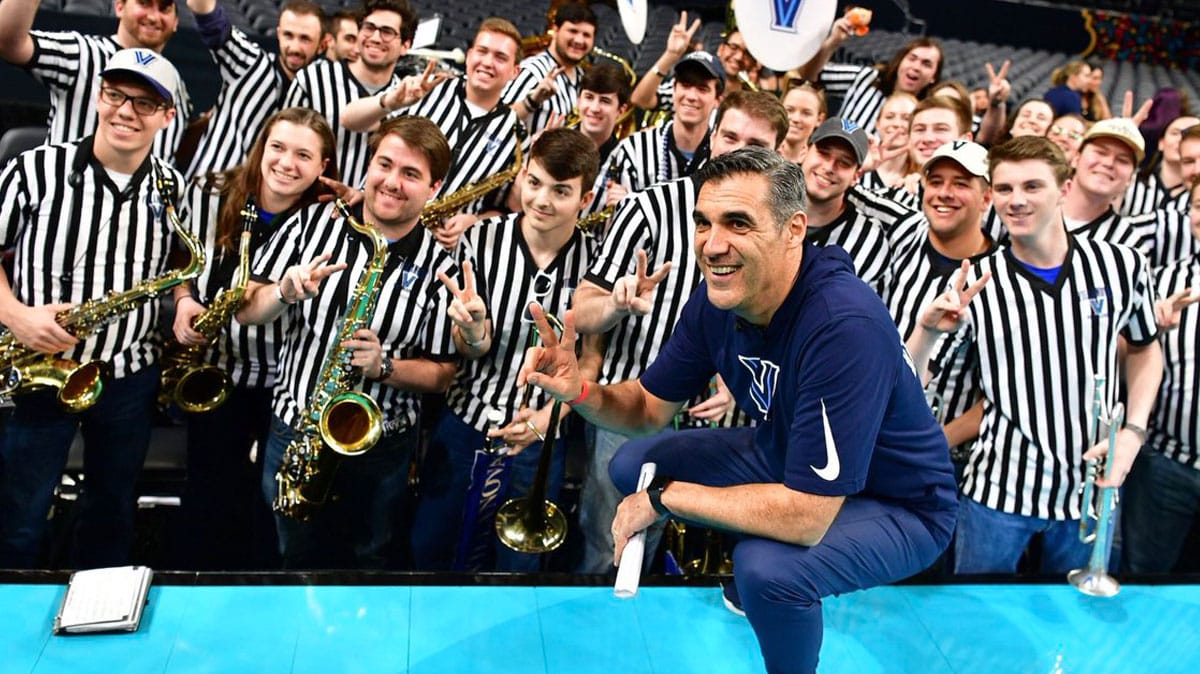 Exciting, fun, blown away – these are just some of the adjectives and phrases pep band directors have used to describe the experience of participating in the NCAA basketball tournament. Like the players, band members and their directors put their whole hearts into the games, spending many hours practicing their stands music for these showcase events.

After the championship games, we spoke to the directors of some of the bands, including both teams that made it to the men’s final – the University of Michigan and Villanova University – as well as the director of the Mississippi State University band, whose team played in the women’s championship two years in a row. Each of the directors talked about the tremendous amount of planning that goes into ensuring that playing in the tournament goes off without a hitch.

“The Final Four is such a celebration for the four teams that made it.”

To help with the process, the games are scripted, and a NCAA member sits by each band director to give cues for when to play. Each band can only have 29 students per game at the tournament, so thought has to be put into which members will attend each game. There are also numerous NCAA events outside the games, so the bands come prepared to play in different venues.

Dr. Cliff Taylor, Associate Director of Bands for Mississippi State, has worked at the university for 13 years and has been enjoying the NCAA tournament for many seasons. During the regular season, he and his colleague Dr. Craig Aarhus direct 45-member pep bands at men’s and women’s home games. The pep bands feed from a 390-member marching band and five different concert bands, so auditions are a necessity for them. The final cuts for the spots in the tournament games were made by seniority and availability. 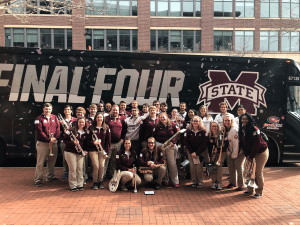 Taylor says the tournament is quite different from home games. “There is a lot more excitement and hype around the NCAA games,” Taylor said. He also indicated that they don’t necessarily have the benefit of a home crowd during the tournament, since a number of people in attendance are there to support another team or are just there for the event. That might be discouraging to some, but Taylor views it as a challenge and an opportunity.

“We try to get the swing voters to cheer for our team,” Taylor said. “We want to win over those neutral folks, so it is a lot of fun for us to be at the game.”

Another difference with NCAA tournament games, according to Taylor, is the time to perform songs. At home the bands don’t get to play full songs very often due to timeouts being filled with different promotions or PA announcements. At the tournament, though, the breaks and halftimes include more time for the bands, giving them the chance to play a full song when it’s their turn.

The MSU band usually follows a pre-scripted lineup of songs, though they may throw in a cheer or fight song if the game is close. That plan usually includes these six favorites:

Outside of the games, the most significant events for the band all happened in an area the organizers called “Tourney Town.” There it’s all about making the tournament a memorable experience for everyone involved. This past tournament attendees included about a thousand kids from a reading program in the Columbus, Ohio schools who were rewarded with a trip to the venue. The band also attended an event supporting Ronald McDonald Charities, performed at a dinner for the tournament officials, and played for “Bounce,” an event that was like a 3K race but also required the runners to dribble a basketball. All Final Four bands got to participate in these events, as well as a Battle of the Bands-type event.

“There’s a lot of excitement in the final four,” said Taylor. “And one of most fun things for the bands to do is to interact with each other. They enjoy sharing the time together and entertaining the fans.”

It’s no secret that there are a lot of songs that cross over between schools, so the bands decided to have a jam session. One school would start a song and if anyone else knew it, they joined in.

The University of Michigan Band

The Michigan pep band is directed by Dr. Andrea Brown, who has worked at the university for five years. She is the Assistant Director of Bands and Associate Director of Michigan Marching and Athletic Bands, and she is among the three female band directors whose teams made it to the men’s Final Four.

Michigan has an excellent music program, and the marching band, which entertains fans at football games, is over 400 strong. For basketball season, they can only take 106 students because of the limited space. The group is divided into two and comprises mostly marching band members, with a few exceptions. Like Taylor, Brown uses seniority as a factor when determining placement in the NCAA tournament band. She says it’s a tiring but exciting experience for the students who participate, but she wouldn’t trade it for anything.

“I think the NCAA championship is my favorite sporting event,” said Brown. “The basketball teams are smaller, and you can see everyone’s faces during 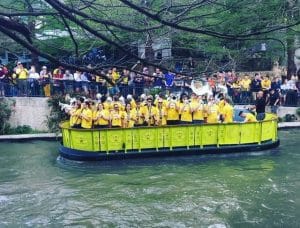 the game, so it seems more intimate.”

Brown says the band also enjoyed the extra events outside of the games. She says one of the highlights of the trip was when the bands and spirit squads boarded boats to perform along San Antonio’s famous River Walk. Along with the other teams’ bands, they floated down the river playing for people along the banks.

During these events and the games, Michigan plays a mixture of traditional school songs, pep classics, and modern hits, many of which are arranged specifically for the band. Here’s a sampling of some of their favorite tunes:

For Michigan, this year’s tournament was smooth sailing compared to their harrowing experience last year on their way to the Big Ten Tournament. The charter plane carrying the team, the band, the cheerleaders, coaches and staff skidded off the runway after an aborted takeoff. There were only a few minor injuries, but the band was left without uniforms or instruments. Not missing a beat, they gathered all the instruments they could find in stock and flew to Washington D.C. the next morning for the game.

This year went much more smoothly, though Brown admits, “No one expected the team to go this far. It has been quite a ride with Michigan basketball.”

Brown says the band’s relationship with the team was strong throughout the tournament and that everyone was very appreciative of the band’s contributions.

“We’ve had a wonderful experience being with Coach Beilein and the team. It’s been really great,” Brown said, “The Final Four is such a celebration for the four teams that made it. It is a special feat to get this far.”

Of course, every tournament has to have a champion, and this year the men’s championship was won by Villanova. This is Beth Sokolowski’s first year as the director of the Villanova Band, and she certainly chose the right year to start. She leads a band that fluctuates from 80 to 120 members depending on the semester. There are no music majors or minors at Villanova. There also are no auditions for the band, so if you want to be in the band, you’re in. Villanovans are just there for the love of music.

And do they ever love music. There’s a joy in music-making that captures the crowd, as evidenced when they sent their team off before the first round.

There’s nothing quite like this music to get the crowd fired up. Some of Villanova’s go-tos are:

Of course, the NCAA tournament adds its own level of excitement to everything around it. For Sokolowski, the coolest moment of the Final Four weekend came when all four bands were together. It’s no secret that there are a lot of songs that cross over between schools, so the bands decided to have a jam session. One school would start a song and if anyone else knew it, they joined in.

“I think it’s the opportunity to understand how through music we can serve and support our community,” Sokolowski said. Like the bands they lead, the directors themselves also got to meet one another at these types of events and talk about the amazing tournament and what music can do for the crowds.

Overall, Sokolowski says, the tournament is an intense experience for everyone. She says, “It was literally a four-week tour.” For that time period everything was crazy. The pep bands were away from school for four to five days each week, leaving three or so days a week to take care of homework, laundry, and whatever else needed to get done. In Sokolowski’s opinion, it was worth it to “see how we can impact a crowd at critical moments through the music and really provide the soundscape for excitement and celebration.”

The experience only grew when it came time for the championship parade in Philadelphia. The band escorted the team down Market Street to City Hall where thousands of people waited to celebrate with them.

“You were just kind of blown away,” Sokolowski said. It’s hard to encapsulate the tournament experience any better than that!