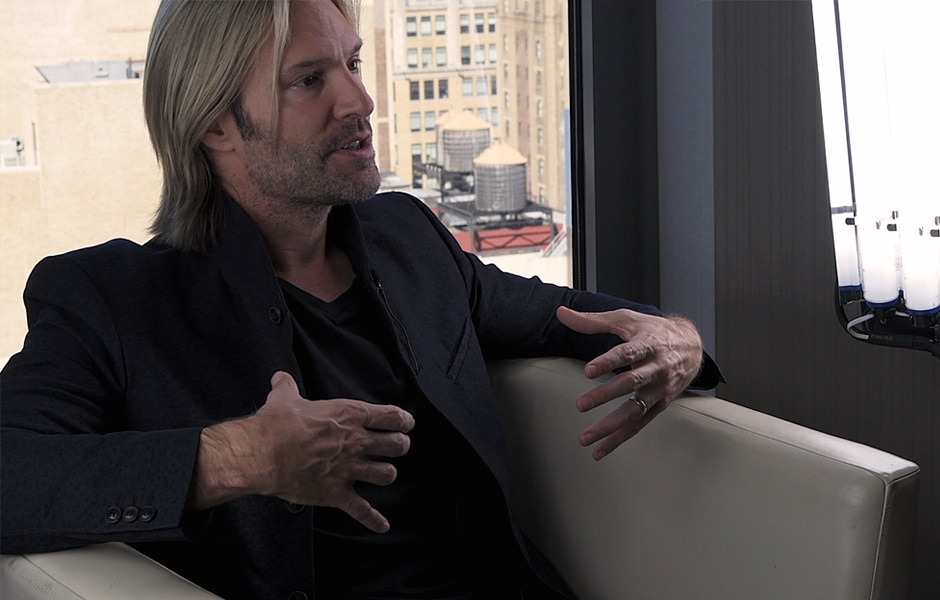 The Inside Voice: An Interview with Eric Whitacre

The name Eric Whitacre is sure to turn heads anywhere musicians gather. While he is a composer of choral music first, his wide range of talents has enabled him to travel the world, writing music for different ensembles and performing with people from all walks of life.

He has conducted choral and instrumental concerts at home and overseas with such renowned ensembles as the London Symphony Orchestra, the Royal Philharmonic, and the Minnesota Orchestra. Whitacre has even collaborated with legendary composer Hans Zimmer and British pop icon Annie Lennox. This is an impressive résumé, especially for someone who, until the age of 20, could not even read music.

A late bloomer in the music world, Whitacre joined the choir at the University of Nevada, Las Vegas in the hopes of meeting women. Whether that goal was met has not been discussed to this day, but what he did find – though he never sought it – was a passion for composition. In the past, he played synthesizers in a pop band, but when he was introduced to the Mozart Requiem Kyrie, he quickly became interested in composing choral music. His teacher, David Weiller, was most influential in this development. In fact, Whitacre’s first piece, Go, Lovely Rose, was written for Weiller as a class project.

Whitacre continued pursuing composition at Juilliard, where he studied under fellow composer and mentor John Corigliano. There, he learned how to add complexity and subtlety to his already striking works. One need only listen to a single piece he has written to understand how deeply he loves rich tones and melody. When speaking about composing, he often describes what he calls the “golden brick” – the smallest piece of melody from which he begins to build a song. Whitacre is very open about the many mentors who have made him who he is today. That appreciation has led him to become an advocate for music education and share what he has learned with others, notably in his two TED Talks: A Virtual Choir 2,000 Voices Strong and Virtual Choir Live.

While Eric Whitacre has written many beloved pieces, he is probably best known for his viral internet creation, the Virtual Choir. It began as a simple experiment in 2009 and became a worldwide phenomenon. Singers from around the world can upload videos of themselves singing a selected piece, then Whitacre and the Virtual Choir team spend countless hours meshing the submissions together into one seamless experience. Since its inception, Virtual Choir has grown from 185 singers to 8,409 videos from 101 countries.

Not satisfied with simply being a brilliant choral composer, Whitacre has often ventured into other idioms, much to the pleasure of his fans. Many of his non-choral works have become popular, especially in the concert band community. Always hungry for new pieces, bands across the nation are starting to appreciate Whitacre’s talents just as choirs do. Success did not come immediately, however. In his early years, Whitacre had difficulty breaking into the concert band market to the point where he was left trying to sell his first band composition, Ghost Train, out of his apartment. J.W. Pepper took notice of this piece, however, and offered to help Whitacre find a publisher for the piece. From there, a strong working relationship has grown between the company and the composer.

Much to the joy of his American fans, Whitacre recently announced he and his choir will be making just their second-ever visit to the United States. The tour, called Music for Sacred Spaces, will feature some of his most well-known pieces as well as a Whitacre world premiere.

Reflecting on all that Whitacre has done so far invites the question, what is next for this beloved musician? There is no limit, it would seem, to his taste for innovation and hard work. Whitacre describes himself as “endlessly curious,” and his appetite for new challenges has so far been insatiable, taking him from singer to composer to tech innovator and beyond. Though it would be impossible to guess how Whitacre will astound us next, it is a near certainty that he will continue to be one of the brightest stars in the musical world for years to come.