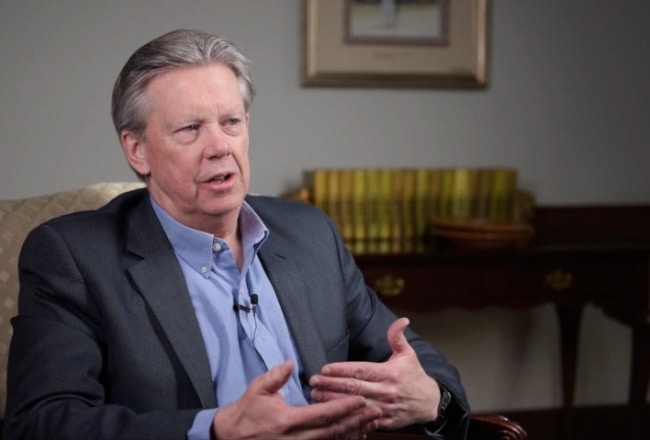 The Inside Voice: An Interview with Lloyd Larson

Standing in the St. Matthew Lutheran Church in Hanover, Pennsylvania, it is not difficult to see how the beauty of religious devotion can inspire someone like Lloyd Larson to create such splendid choral pieces. Indeed, Larson considers himself a product of the church his family attended while growing up in Illinois.

To this day, Larson turns to both the liturgy and the words of his pastor for inspiration in his music. From those sources, he has built a wide repertoire of choral, keyboard, and handbell music, including collections and major works. All the while, he has continued to direct his local church choir, which he feels is his most significant credential for writing sacred music. The job keeps him rooted while he creates and edits music.

It is a somewhat larger ensemble that joins him at St. Matthew this day. Like over a hundred others, Larson has come for the Music in the Valley sacred choral reading session, presented by Shawnee Press. He is here to lead those in attendance as they read and sing church choir music. Like other reading sessions, the clinics are run by the composers themselves. It is a treat for attendees and clinicians alike. For Pepper, it is a fantastic opportunity to spend time with customers and speak with great composers like Larson.

Like many who have fallen in love with music at an early age, Larson’s mother was his first teacher. He was one of five kids, and his mother taught piano to all of them. His father, while not a musician, was very supportive of his musical aspirations. Both worked to instill in him the faith he now uses as the basis of his compositions. This fusion of faith and music led him to Anderson University, a Christian liberal arts school where he received his bachelor’s degree. After that, he enrolled in the Southern Baptist Theological Seminary, where he earned a master’s in church music and composition.

Perhaps the most significant connection Lloyd Larson made after finishing his education was with John Carter, who opened a number of doors for him. Carter introduced Larson to John Ness Beck from Beckenhorst Press. With Beckenhorst, Larson was able to publish his first piece, a two-part Advent anthem called Love Will Be Born. This relationship also led to publishing contracts with both Shawnee and Lorenz. Today, Larson works as a reviewer for the latter and is an important part of their continued success in publishing. Of course, he continues to compose beautiful music, recently releasing a Christmas cantata called Morning Star.

Despite his decades of success, Larson remains humble in his approach to the music he writes. The greatest thing about a church choir, in his opinion, is its ability to bring members of the congregation together, singing and sharing in their faith. For Larson, it is all about faith and music. In his own words, “music has an ability to bring all our senses together in a unique kind of way.” It is a grand sentiment, the truth of which can be heard in every strain of Lloyd Larson’s work.

Check out our exclusive interview with Lloyd Larson on the J.W. Pepper YouTube channel.

Facebook
Twitter
Pinterest
WhatsApp
Previous article
Traveling with Your Music Department
Next article
Music Room Furniture and Accessories: Everything You Need to Furnish Your Music Room