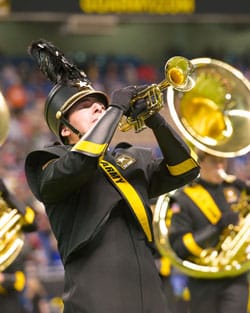 Trying to keep a rehearsal running smoothly with a collection of musicians is difficult enough as it is.  Add to that the unpredictable outdoors, a plethora of competitions, and a hundred or so jittery teenagers and you might as well be herding cats.

With all the different factors and variables that go into a marching band field show, it is incredibly satisfying to see everything go right in the end.  Of course, with so much going on, a director cannot always expect to beat the odds and have a flawless show or rehearsal.  Here are three instances when the odds won out:

Missing in Action
Band directors have rules for a reason.  If a student ever questions that, here is a story to reinforce the fact:

Our first director has just a few simple rules.  One of the easiest of those: students are NOT allowed to leave the premises without an approved staff member or parent.  A member of the staff is provided to transport students if need be.  That is just what a certain student was told when asked if she could have another band member drive her home to pick up her medication.  Did the student listen?  Of course not.  Here is what transpired:

Lunch was over and the two students had not returned.  Eventually the father of the boy who offered to drive the young lady appeared at the rehearsal and motioned for the director to come speak to him.  The news was less than pleasant.  The students in question had been involved in a car accident.  Before you panic, the students themselves were fine.  The house they crashed into was not.

Yes, a house.  But wait, the director thought, as he looked out into the parking lot.  That’s the student in question’s car right there in the parking lot.  How could that have happened?  As it turned out, the driver had borrowed another band member’s car.  The director called that band member out to speak to them, asking “did you lend your car to this student?”

“Why, yes!  Er, after a fashion…”  What do we mean by “after a fashion?”  Well, the car didn’t belong to the student.  It belonged to his grandfather.

So to recap, a male student borrowed his friend’s grandfather’s car to drive a young lady who had been told she could not get a ride from the first boy and proceeded to drive the car into a house which, as it turns out, belonged to a cafeteria worker at the school.  Got it?

No word on whether the young lady felt this was better or worse than driving with the designated staff member.  We have a guess…

The Day the Field Stood Still
Flag markers can be a huge help when learning a new drill.  They make a bit of a mess and you cannot leave them out overnight, but the visual aid is key for teaching new movements and positions quickly.  Cleanup can take a while and be a little taxing (especially when thrust upon a horde of teenagers), but it is doable.  Well, at least until the power goes out…

That very nightmare came true for one director out in California.  To say such a thing happens once in a blue moon would be fair.  Of course, had it been a blue moon things would have gone much more smoothly, as there would have been plenty of light.  As it was, the moon was new and the field fell dark.

After the screaming (yes, screaming) subsided, the director was able to regain what sense of order one can hold over musicians.  For once, modern technology became the director’s friend as one by one the students pulled out their cell phone flashlights to illuminate the areas around them.  The power never returned, but the band was able to (slowly) clean up the field before ending practice early… and in the dark.

Three buses and one staff van left school for Regionals one fateful day.  The transports ended up separated, with buses 2 and 3 stuck behind another car.  That was no big deal, or so they thought.  Creeping up on the side of the road, however, was something none of them expected, especially the driver of the car in front of bus 2.  A yard sale, apparently a very interesting one, appeared.  The car driver stopped suddenly, fascinated by the used wares.  Bus 2 managed to slow down enough to avoid hitting the car, but bus 3 did not have enough warning.

Bus 3 crashed into the back of bus 2 while bus 1 and the staff van unknowingly left them behind.  Another motorist tracked the staff van down to alert them to the accident, and they returned to find emergency vehicles arriving at the scene.  First, of course, the director made sure there were no serious injuries.  None, which was a miracle of sorts.  The real miracle, however, would be getting to the competition on time.  If they missed the competition, they would be disqualified and could not compete in the state finals.

What happened next will instill a greater faith in humanity than you have ever had before.  First, the athletic director and cross country coaches found two other buses from the school and drove up.  Two of the competing bands sent supporting vehicles and enlisted their own band parents to take care of the logistics on site while things at the crash site were put in order.  The other seventeen bands agreed to allow them to go last so that they could get as many students ready to perform as possible.

By the time it was their turn, the band had only sixteen holes (pretty good considering the circumstances).  They ended up placing second behind one of the bands that helped them transport students.  All in all, the ordeal ended in NO broken bones and NO serious injuries, while the band still managed to qualify for Finals.  Think about next time you stop short for a yard sale!

Got your own horror story?  We’d love to hear them!