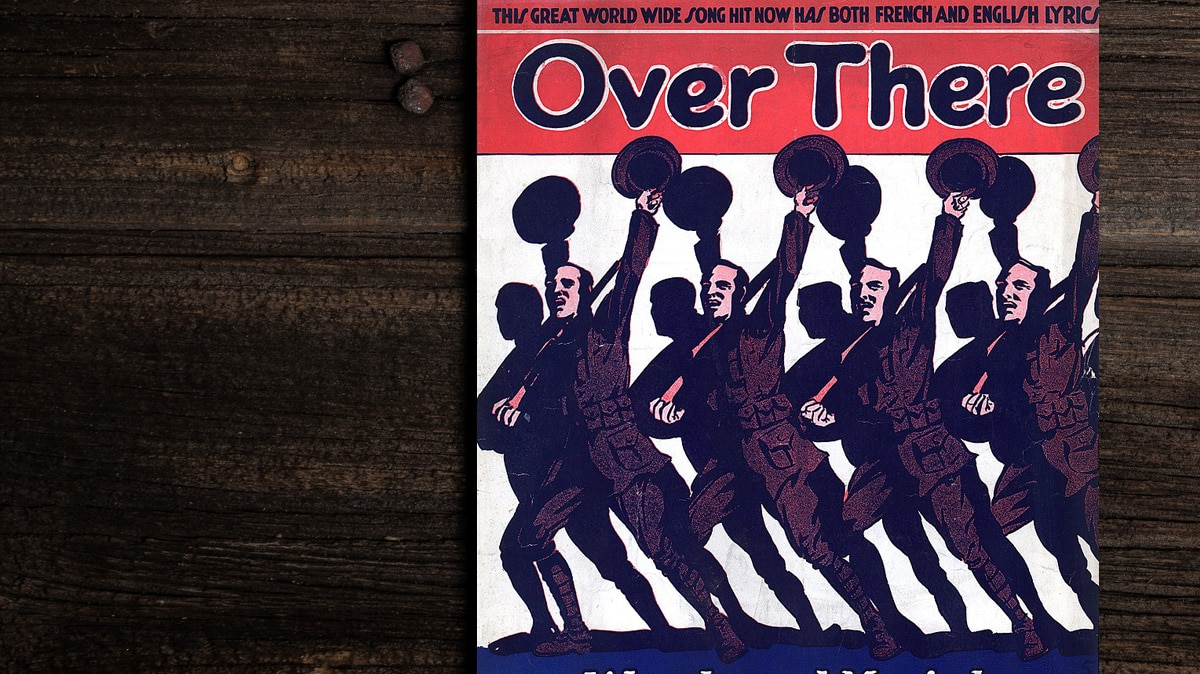 November 2018 marked 100 years since the guns were silenced in Europe on “the 11th hour on the 11th day on the 11th month” in 1918, ending World War I. Concerts were held across the globe to commemorate how the war influenced the world of music. Here are ten ways the war had an impact on the arts and culture:

The United States’ unofficial anthem was written towards the end of WWI by Irving Berlin, but it was kept tucked away for twenty years. Berlin pulled it out when singer Kate Smith performed it to mark the 20th anniversary of the war.

The song was inspired by Berlin’s experiences as an immigrant. His family came to the United States from Russia in the late 1800s. After Berlin became a composer, he was drafted in 1917. The military wanted him to use his talent to motivate the troops. To do this, he wrote a musical called Yip Yap Yaphank that included humorous numbers such as Oh! How I Hate to Get Up in the Morning. He originally wrote God Bless America for the musical’s finale but decided it was too serious for the show. His daughter says the song was written from a first-person perspective for Berlin to show his gratitude.

“It was a very personal song to him because he came to this country and this country gave him the opportunity. It allowed him to become who he became – a great song writer. So his gratitude to America was enormous,” said Mary Ellen Berlin-Barrett, Berlin’s daughter. 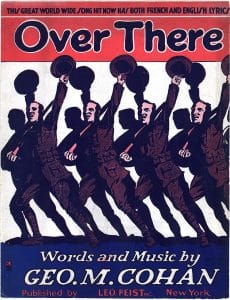 On the day the United States announced it was joining the Allied Powers, Berlin’s friend George M. Cohan wrote a song titled Over There on his way to work. It quickly became one of the most popular songs of the war and sold two million copies. As the Library of Congress notes, singing was a popular pastime among the troops, especially before the advent of commercial radio in the ’20s, and inspirational songs like Over There were popular with the troops as well as the folks at home. For his efforts to encourage patriotism, Cohan was awarded the Congressional Gold Medal, becoming the first entertainer ever to be honored in this way.

3.  In Flanders Fields focuses on the deep cost of war. 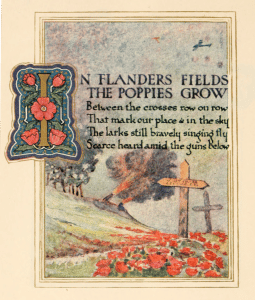 Another song created shortly after the United States entered the war was In Flanders Fields. It is based on a poem written earlier in the war by Canadian Lieutenant-Colonel John McCrae, who wrote the poem after performing a burial service for his close friend Alexis Helmer who was killed during a battle in Belgium.

The song that utilized the poem was composed by Charles Edwards Ives. To this day, the poppies mentioned in the lyrics are used to recognize soldiers who have died in conflict.

Gustav Holst began writing this renowned orchestral suite months before the war broke out. He started by creating the movement titled Mars, the Bringer of War. Each of the work’s seven movements focus on a different planet based on Holst’s astrological views.

Like the rest of the world, the war proved to be a challenging period for Holst. He wanted to contribute to the war effort and volunteered to serve but was rejected for health reasons. Later he wrote the piece Ode to Death to mourn friends lost in the conflict. However, such Holst works failed to receive the attention The Planets did. This major orchestral work influenced culture over many years. This includes John Williams’ use of the Mars movement as inspiration for The Imperial March composition for Star Wars.

World War I limited opportunities for the large-scale ballets that helped make composer Igor Stravinsky’s music famous. That led to him changing direction when he took refuge in Switzerland during the war. He created the theatrical work called L’Histoire du soldat – The Soldier’s Tale that included a small ensemble of seven instruments. The work utilizes what is thought to be the first percussion solo.

The music is filled with changing time signatures and difficult passages. As trumpeter Wynton Marsalis told the New York Times when he was asked to play the composition in 1998, “Man, that’s hard to play. That’s what goes through the minds of trumpet players when they hear it.”

Claude Debussy was one of the world’s great composers who didn’t live long enough to see the end of war. When it broke out, he was worried about his debt and didn’t concern himself too much with politics. As the war progressed, his writing changed. He increasingly conveyed his pride in French culture and his anger at how the war was harming his countrymen. It led him to composing the piece Christmas for Homeless Children, which includes lyrics about children losing everything in the war. When Debussy died in 1918, Paris was under siege and his funeral procession had to move through deserted and dangerous streets to a temporary grave.

Austrian-born composer Arnold Schoenberg originally viewed the war as a way to dampen the popularity of French music that he said exemplified “decadent bourgeois values,” along with the works of some composers, including Georges Bizet and Igor Stravinsky whom he called “mediocre kitschmongers.” However, he would end up being drafted to serve in the Austrian army at the age of 42, which interrupted his work and caused him to do little composing during the war. It would not be until later that Schoenberg would be able to introduce his influential 12-tone method of composing.

Britain’s music halls were popular gathering places for the working class, where patrons could eat, drink and watch performers. Much of the entertainment was designed to be funny, and the audiences had a reputation for often being rowdy. By the time the war rolled around, there were hundreds of music halls across Britain, and they were heavily used for military recruitment and promoting the sale of war bonds. Innumerable soldiers began their military service after being recruited at a music hall.

Years later, memories of World War I have crept into culture in sometimes unexpected ways. Cartoonist Charles Schultz gave us the heroic Snoopy pretending to be a flying ace battling the Red Baron, who was based on a real German pilot. A year after the story line was introduced, the first song about Snoopy and the Red Baron performed by The Royal Guardsmen was released.

Another example is the inclusion of Maurice Ravel’s Piano Concerto for the Left Hand in an episode of the long-running television show MASH. Ravel was commissioned to write the piece by Austrian pianist Paul Wittgenstein, who lost his right arm during World War I. The MASH episode features the composition and Wittgenstein’s story being used to inspire a character whose right hand was permanently injured in combat.

In the end, the full effects of the war may never be known. Numerous musicians were lost during the conflict. Among the more promising composers killed were George Butterworth and Rudi Stephan. Butterworth was considered one of the most talented British composers of his generation. At age 31, he was killed by a sniper.

On the German side, Stephan was a promising composer who died at the age of 28. Few pieces are available from either composer – leaving unanswered questions about might have been if their fates had been different.

To try some band compositions from World War I, view Echoes from the Battlefield.