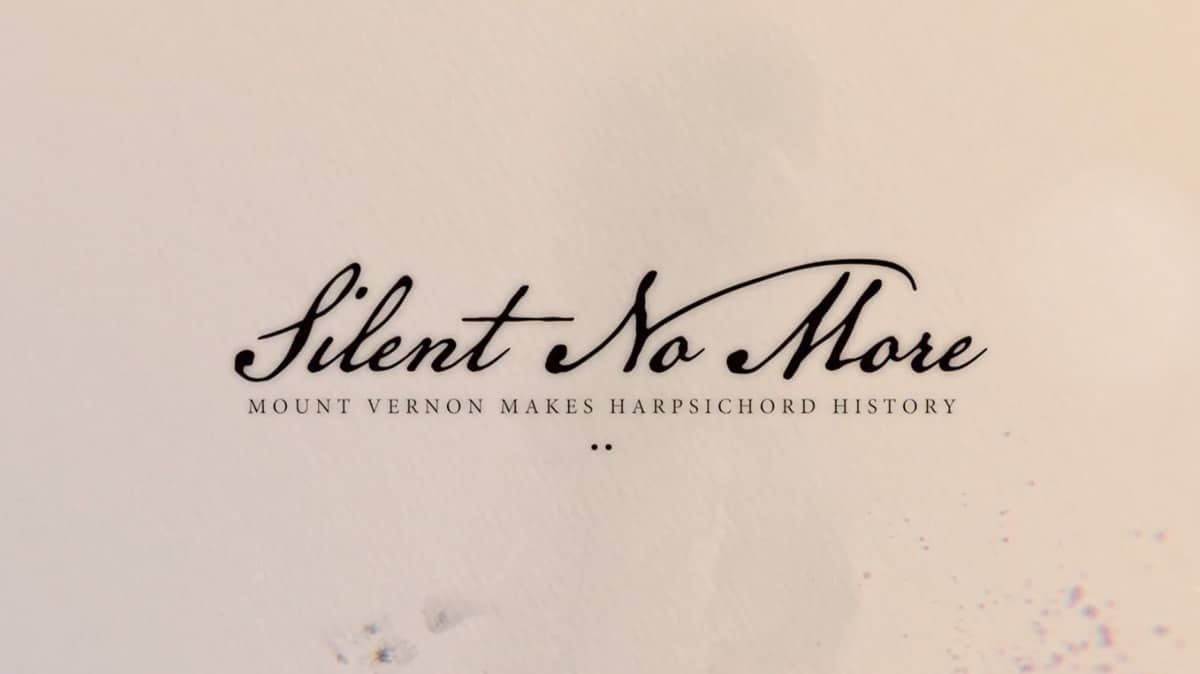 The harpsichord holds an important place in music history. Its unique sound is instantly recognizable, flavoring the works of countless composers from the Renaissance, Baroque and Classical periods. The historic harpsichord at Mount Vernon is of special interest to John Watson, Curator Emeritus of Musical Instruments for Colonial Williamsburg. It’s an instrument modern ears have had no way to hear… until now.

Mr. Watson has spent more than a year replicating the instrument in question, painstakingly re-creating its unique attributes in hopes of bringing the past to life. When he is finished, both the replica and the original will return from Williamsburg to their home at Mount Vernon. Mr. Watson is not only creating this reproduction because of this harpsichord’s unique place in the history of music, but also because of its unique place in the history of the United States of America. The original will be preserved for future generations in a climate-controlled space, while the replica will be shared with the public inside the Washington family home.

It is a lesser-known fact that George Washington was a great lover of music. Though he himself did not play or sing, our first President is quoted as saying “Nothing is more agreeable, and ornamental, than good music.” He was, in short, a fan of music. Washington was known to attend the opera as well as concerts and other musical events, and was pleased to have his own home filled with music when possible. Nowhere was this more evident than in the harpsichord he imported from England for his step-granddaughter Nelly to play.

Born in 1779, Nelly grew up during a time when various statesmen and dignitaries would frequent the Washington residence in the young nation’s capital in Philadelphia, and later at Mount Vernon. Nelly often entertained guests by playing and singing. One such guest, a Polish nobleman, remarked that, “Her sweetness is equal to her beauty, and this being so perfect of form, possesses all the talents: she plays the harpsichord, sings, draws better than any woman in America or even in Europe.”

Nelly was the primary player of the instrument for the Washington family. An important part of her education, she learned it alongside her other studies which ranged from English and French to embroidery and painting, to dance and music. Nelly’s training mirrored that of many young women of the period who were expected to be well cultured.

The harpsichord itself was also of historical significance independent of its famous owner. The instrument was constructed during a time when both pianos and harpsichords were used in the home – the harpsichord was quite refined, and the piano was growing in popularity as the turn of the 19th century approached. As a result, the harpsichord Washington purchased had elements of a high-end harpsichord coupled with features that were distinctly pianistic.

Happily, in addition to the instrument, much of the original music owned and played by Nelly still remains in the rare book library at Mount Vernon. Among those pieces are several adaptations created by her music teacher, as well as arrangements of Haydn’s La Reine de France, Gluck’s overture to Iphigenia at Aulis, several pieces by Bach, an excerpt from Handel’s Water Music, songbooks from popular operas, and several pieces written in honor of George Washington. Those curious what Nelly’s performances may have sounded like can hear some of this music played by harpsichord performance expert Joyce Lindorff.

Reproducing this historic harpsichord has been a labor of love for John Watson. He has had an interest in this particular instrument since he first saw it in the 1980s when it impressed him as a living piece of history worthy of study. Watson became so well versed in the instrument that when the curators of Mount Vernon considered having a replica made, they turned to him. John deconstructed the original instrument to study how it was made, taking hundreds of measurements and photographs and identifying the materials used. This meticulous examination of the original instrument is making it possible for Watson to create a reproduction that is as true as possible to the original. From its home at Mount Vernon visitors will hear the music of the Washington home for themselves as the Washingtons would have heard it.

This harpsichord is a fascinating piece of history that gives us a glimpse into what life was like around the time our nation was founded. If you love music history, check out some more of our historical blog posts and videos: