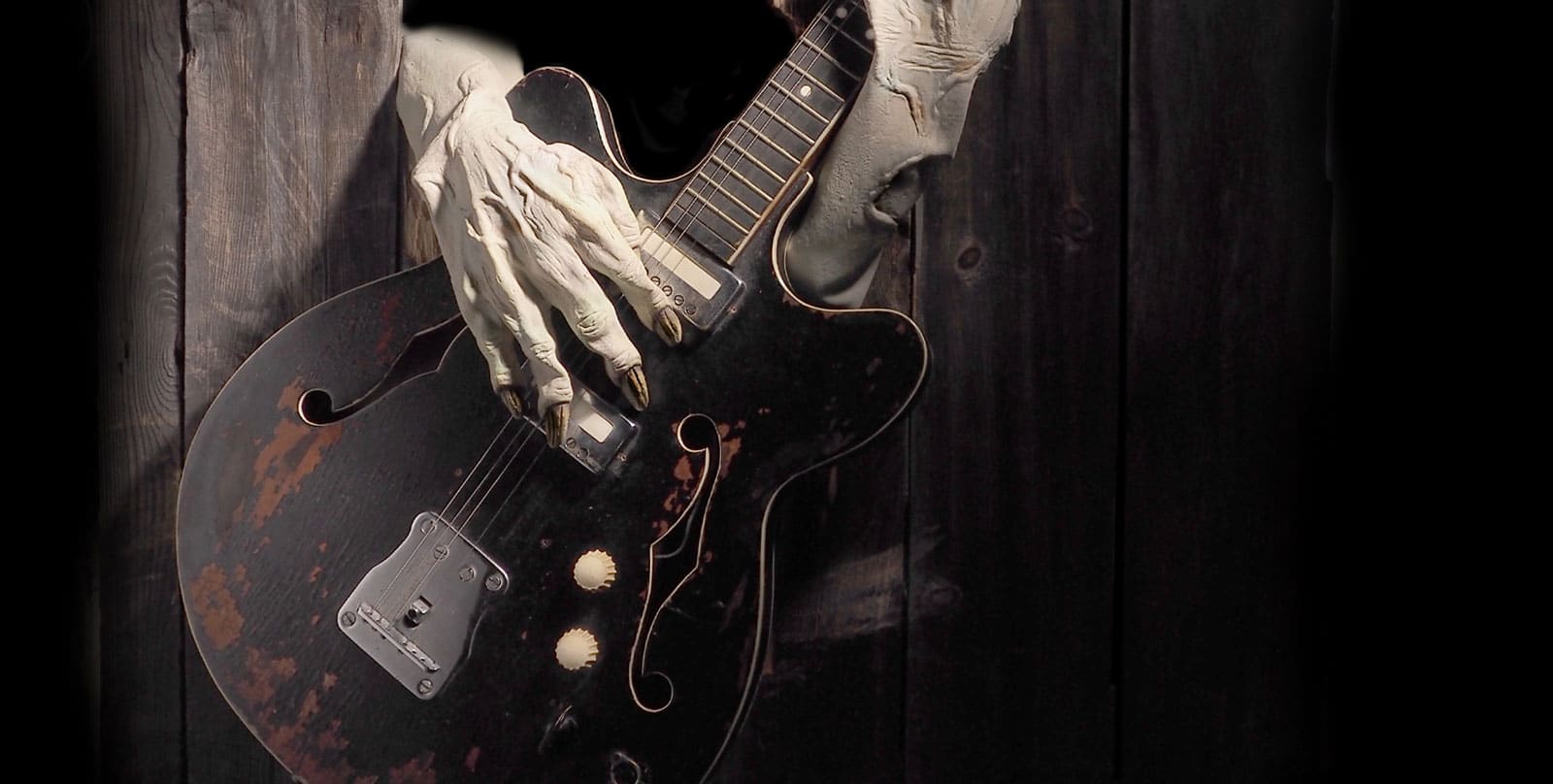 Some of the most well-known songs you may hear during trick-or-treating time were written in a flash but have endured for many, many years. Inspired by monsters or general silliness, here are the stories behind a few classics that often top lists for favorite Halloween songs.

“He did the monster mash” has proven to be one of the most memorable lines in the world of insanely catchy novelty songs. Monster Mash was written in 1962 by aspiring actor Bobby Pickett and his bandmate Leonard Capizzi, who performed with the group the Cordials. Both of them were horror movie fans, and during one band set, Pickett did a monologue in the voice of actor Boris Karloff, who played the monster in Frankenstein. The crowd loved it, so Capizzi suggested they write a novelty album using Pickett’s talent with impressions.

Pickett balked at first but eventually they sat down and wrote Monster Mash in about an hour. They were inspired by the popularity of both monster movies and dance crazes like the Twist and the Mashed Potato.

The popular session group The Blossoms was tasked with singing backup vocals for the piece’s recording. Backup singer Darlene Love later told Billboard magazine that the singers weren’t pleased when producer Lou Adler told them about it. She said they thought the song was “totally ridiculous.”

“He told us they were getting ready to do a Halloween song. We were like, ‘Oh please. A Halloween song? Who’s gonna do a song about Halloween?’” Love said.

The Blossoms listened to the lead vocals and decided to have Pickett sing and then they’d basically respond to him with lines like: “He did the mash.” Some wah-oohs were also added. Later Pickett was asked what the backup singers were saying towards the middle of song when an extra phrase is added, and he said their line was “wah-ooh, tennis shoe,” but who knows why.

The song quickly became a huge hit in the United States, but in Britain the BBC banned the tune. In a BBC article from 2017 the network explained:

“With lyrics like ‘it was a graveyard smash,’ the BBC failed to see the funny side and banned the song for being ‘too morbid.’”

It took the network 11 years to lift ban, and when it did in the 1970s the song rose to #3 on the charts in the United Kingdom. Since the song was written, it has been covered by numerous bands from The Beach Boys to the Misfits and was even “sung” by Alvin and the Chipmunks. Pickett’s daughter told Billboard her father was grateful for the song’s success, and she has also loved its popularity, saying “I don’t want it to go away.”

Composer Vic Mizzy had written numerous radio hit songs before he began creating music for television. Despite all his successes, the infectious theme song for The Addams Family has endured as perhaps his best-known song. As he told CBS This Morning, a brief moment of inspiration led to a comfortable lifestyle.

The vocals on the song were also quite simple. The show’s producers didn’t pay for singers, so Mizzy sang the song and then overdubbed himself three times to make it sound like a group of vocalists.

Another interesting choice was the use of the harpsichord. Mizzy’s parents gave him a toy accordion when he was three and then a player piano at age four, which inspired him to play piano for years. But in the 1960s, another keyboard instrument – the harpsichord – made a bit of a resurgence as its unique sound was used in unusual shows like The Addams Family. The instrument’s ornate look fit in well with the set, and during the show it was played by the character Lurch.

A year after the show debuted, The Beatles helped the harpsichord become a viable option in the pop music world as well after the group used the sound of a sped-up piano in the song In My Life. The altered piano sounded like a harpsichord and led to other producers using the harpsichord in pop music.

The Addams Family theme song though has surpassed the popularity of many other songs using harpsichords, becoming a staple used in commercials, sporting events, and television shows.

Like Monster Mash, the original Ghostbusters theme song was written in a short period of time. Moviemakers had spent much money and time trying to find a theme song for their new movie Ghostbusters. They had already rejected dozens of ideas from songwriters when they turned to musician Ray Parker Jr. for help. He was working on a song with the band New Edition in Los Angeles, but wanted to get back home to help his ailing parents. A movie producer offered Parker $50,000 if he stayed in town two more days to work on a theme song.

Parker told the hosts of radio show Breakfast with Gary & Kelly that the music came easily, but he found it creatively very challenging to use the word “ghostbusters” in the lyrics, as he was told he had to do.

“I knew there had to be a catch somewhere,” Parker said. “It’s a stupid word to get in the song.”

Inspiration finally hit around 4:00 a.m. on the day the song was due. He saw a commercial for a plumbing company and thought doing a jingle-type song may work with lines like “Who you gonna call.” To get the crowd response of “ghostbusters,” he used some connections to gather a group of high school students early that morning before school for the recording session.

Parker said the students were really excited when they shouted “ghostbusters,” which really made it work. Within hours, the song had come to life. The moviemakers loved it and went all out on the song’s video. They made arrangements to block off Times Square in New York City at 1:00 p.m. on a Friday to record Parker dancing with the actors in the film.

The song was a smash hit, but then Huey Lewis sued, claiming the music for Ghostbusters was plagiarized from his song I Wanna New Drug. They quietly settled out of court, and it remained out of the public eye until many years later when Lewis mentioned the controversy in an interview. Legal troubles came back to the surface again, which sent internet researchers to work. They claim that the bass lines to both songs may have actually been “stolen” or “borrowed” from the song Pop Muzik. You can be the judge and listen to it on YouTube.

This Is Halloween – The Nightmare Before Christmas

Composer Danny Elfman said it “really hurt” when the movie The Nightmare Before Christmas didn’t fare well when it was released in the 1990s. Elfman said a producer told him the kids “hated it.” He had thrown his heart into the project, penning all the songs for the movie and singing the parts for the lead character Jack Skellington.

During an interview on Yahoo’s The Build Series, he said they didn’t have a script when he was working on the music, so filmmaker Tim Burton would tell Elfman a bit about the story in order each time they met. When Elfman would get a song idea in his head, he’d shoo Burton out the door and start composing. He wrote each song in three days, so they had ten songs in 30 days.

Before he started writing, he said one of the goals was to make the songs seem timeless – so there were a number of things they didn’t want: no traditional Disney formatting, contemporary Broadway sounds, or rock and roll. Among his influences were Gilbert and Sullivan from the 1800s. Elfman has speculated that the lack of familiarity may have been what doomed the movie at first. But then about a decade later, a cult following began to surface; Disney recognized it and remarketed the film to great success.

“So few [movies] develop a decade later on their own,” Elfman said. “I felt really lucky.”

Now songs like This Is Halloween are a perfect way to greet the ghoulish season, as are the live performances of the show. For a few years, several cast members joined Elfman on stage with a full orchestra at the Hollywood Bowl for sold-out shows. Here is one entertaining clip from the 2015 show.

Other fun songs with a spooky slant abound – you can tell us your favorites below in the comments, and if you’d like to add a fright to your programming, see our options for band, orchestra, chorus, and piano/vocal/guitar.