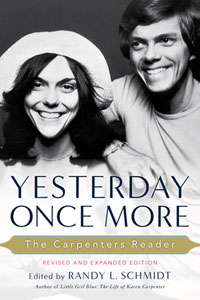 February 4, 1983.  I can tell you what I was doing that morning at about 9:30 a.m. when I heard the news on the radio.  It was a different time – there was no internet, no cable television, and no cell phones with text updates.

Thirty years ago, when there was news, people stopped and listened because it wasn’t streamed constantly like it is today.  When the radio announcer broke into the music with an update, everyone around me in the department store stopped as I did and we listened as he announced that Karen Carpenter had died unexpectedly at the young age of 32.

Today, we remember the life and the music of a singer, of a voice that should not be forgotten.  Much has been written about her life, the illness that eventually took her life, and the emotional conundrum that added to her condition.  Yesterday Once More: The Carpenters Reader, a revised collection of articles and interviews, and Little Girl Blue, a wonderful new biography that just came out in paperback, shed light on her life like none has before.

It is the legacy of her music though, her amazing voice, that should never be forgotten.  While it has now been 30 years since her untimely death, her entire recorded catalog remains available.  If it has been a while since you listened to a Carpenters song, take a minute, find one, and put it on while you read the rest of my blog!

Her voice, that amazing contralto that speaks directly to the very souls of those hear it, will go down in history along with the voices of Ella Fitzgerald, Patti Page, Rosemary Clooney, Bing Crosby, Frank Sinatra and a host of others as one of the greatest voices ever put on tape.  Herb Alpert, who was instrumental in signing the Carpenters to their first recording contract, said that Karen’s voice was hauntingly intimate as if she were sitting in your lap singing only to you!

The hits are just one facet of the music we know and love:  We’ve Only Just Begun was the wedding song for so many couples; Christmas would not be Christmas without Merry Christmas, Darling.  The list is long, but the real gems are found in the album cuts and the many songs released after her death, such as Now, At the End of a Song and Make Believe It’s Your First Time.

As music educators, we share a responsibility to pass on quality music, music that has stood the test of time. Karen’s story is unique, the drummer from the marching band who had the voice, that unbelievable voice, the voice that would touch so many millions of people during her short life and continues to touch people even today.  Having sold in excess of 170 million records in her career with her brother, the Carpenters’ music has lasted through the years.  She referred to herself as “a drummer who sings” and never really fully understood the tremendous gift she had.  To learn more about this wonderful artist, check out these new books.

Lyricist John Bettis, who worked with Richard over the years, penned it best:  “When I was young I’d listen to the radio, waiting for my favorite songs, when they’d play, I’d sing along – it made me smile… just like before, it’s yesterday once more!” Today, let’s celebrate the music, the voice of someone truly mesmerizing, and remember…

Want to remember more?  Check out these Carpenters collections available from J.W. Pepper.

Want to play your favorites right now?  Check out these piano/vocal sheets available through Pepper’s e-Print.