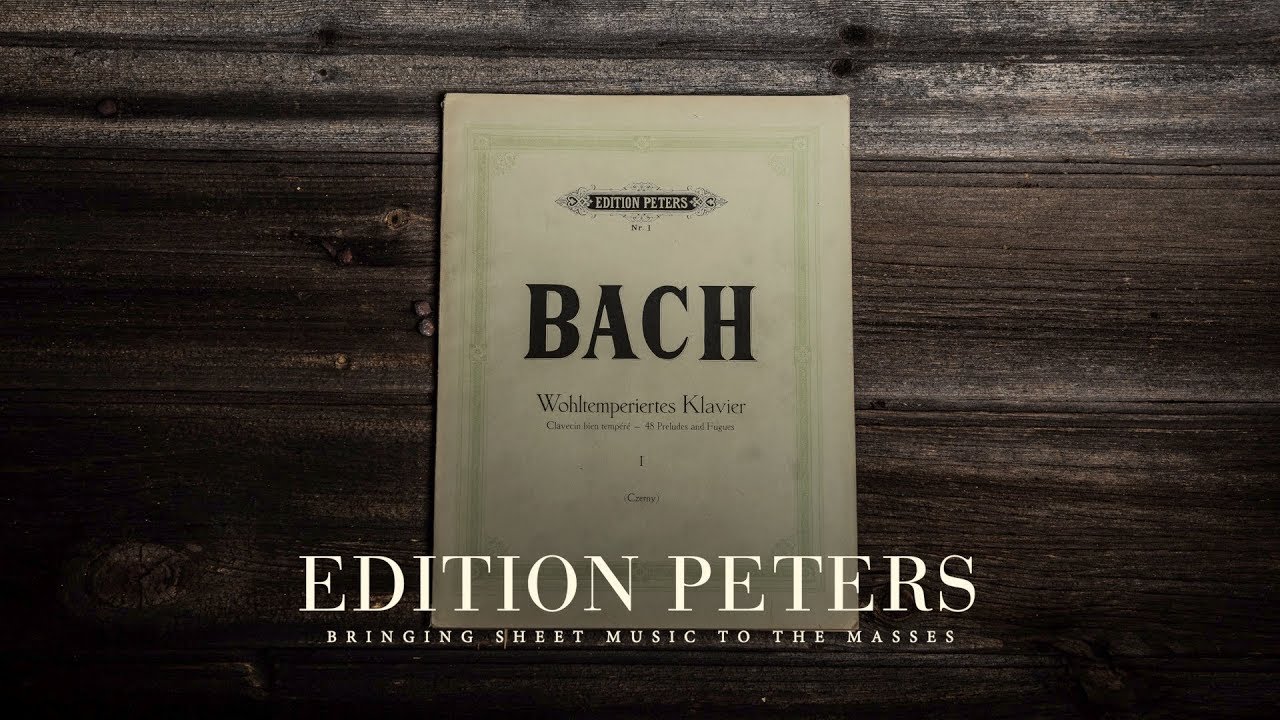 C.F. Peters was founded over 200 years ago in the German city of Leipzig. The company has just finished celebrating the 150-year anniversary of the iconic imprint Edition Peters, commonly known as the “green series.” In the mid-1800s, printing was becoming more efficient. While still expensive, innovative publishers were finding ways to print more music for less. One of those innovators was Max Abraham, a major partner in C.F. Peters beginning in 1863.

Abraham was the first music publisher to use a new technology called the rotary printing press. Using the new press, he could drastically reduce printing costs and increase output, allowing him to sell sheet music at one-fifth the previous price. On the first day of printing the inaugural green series, C.F. Peters released 100 titles, with the first being J.S. Bach’s The Well-Tempered Clavier.

The association between the C.F. Peters company and the works of J.S. Bach goes back to the very founding of the company. Bach composed before publishing was widespread, so after his death in 1750, his music was at risk of being lost to history. The company aided in preserving Bach’s music for future generations by publishing his works at their founding in 1800. They also began publishing early works of a budding young composer named Ludwig van Beethoven, producing editions of Beethoven’s Symphony No. 1, his Septet in E-flat Major, as well as several of his piano sonatas.

The location in Leipzig was instrumental in the development of C.F. Peters as a major player in music publishing. In addition to Bach, Leipzig was home to many other composers such as Robert Schumann and Felix Mendelssohn. In fact, the company was located in the house where Mendelssohn lived for a time, expanding into his apartments following his death.

However, being in Leipzig was only part of what made C.F. Peters so successful in the early 19th century. The company was also extremely innovative in the way they treated composers and how they marketed their music. First, they tried to be as fair as possible to those whose music they distributed. For example, when Robert Schumann’s music entered the public domain, they began distributing his works. Because Schumann’s wife Clara was still alive, the company provided her with residuals from the sales of her husband’s music – something they were not required to do.

That sort of favorable treatment of composers was unusual at the time. In the early days of publishing, companies purchased pieces for a flat sum, and that was the extent of the composer’s compensation. However, C.F. Peters pioneered the concept of profit sharing, wherein a composer received money every time their piece was purchased. This has since become the norm, but at the time was new and attractive to composers. For this and other reasons, Peters was able to attract many great musicians, including Norwegian composer Edvard Grieg, known by many for the incidental music of Peer Gynt, for which he composed In the Hall of the Mountain King.

C.F. Peters also made music more accessible to musicians. Their music rental program allowed ensembles to borrow and perform music that they otherwise would never be able to afford. This made more great music available to the common musician, and in turn, to much wider audiences.

Following Max Abraham’s death in 1900, his nephew Henri Hinrichsen assumed leadership of the company and C.F. Peters continued to thrive. But the company’s great success would be followed by terrible tragedy. When the Nazis rose to power in Germany, Hinrichsen and his family faced discrimination due to their Jewish heritage. Despite their support of cultural institutions and philanthropy in Leipzig and throughout Germany, they were forced to sell the company for a fraction of its worth.

As this was happening, two of Henri’s sons, Walter and Max, fled Germany to live in New York City and London, respectively. The rest of the family fled to Holland, which was occupied by Nazi Germany shortly thereafter. Sadly, they were not able to escape again, and most of the family was interned in concentration camps. In all, eleven members of the Hinrichsen family were killed during the Holocaust.

The two sons who had escaped Germany each started their own branches of C.F. Peters in the cities they had fled to. These locations continue to operate today, but the saga had not yet ended in the nation of their birth. After the war was over, Henri’s sons were able to regain parts of the company, but their former home of Leipzig now lay in Soviet-controlled East Germany. They moved the company headquarters to Frankfurt in the West while maintaining their overseas locations as well.

Meanwhile, the East German government reopened the Leipzig location, calling it C.F. Peters despite the lack of association with the company’s real owners. As a result, there was for a time four different C.F. Peters operating more or less independently.

After the end of the Cold War and the fall of the Berlin Wall, C.F. Peters began the process of reuniting the four pieces of the company. While the Hinrichsen brothers never returned to Germany, the main headquarters of their company returned to Leipzig, setting up shop in the very same building it had been forced to abandon over fifty years earlier. C.F. Peters again became one company, now with locations in Leipzig, London, and New York City.

The company picked up where they had left off during the post-war period, bringing in new composers that changed the way we listen to and play music. Two of the most innovative musicians associated with C.F. Peters were avant-garde composers John Cage and George Crumb, who challenged musicians and listeners alike to rethink how they viewed classical music.

Today, C.F. Peters continues to publish some of the greatest high-end ensemble music in the world through their Editions Peters green series while contemporary works are released with their new music cover. Two important partners with the Peters’ New York office are Oxford University Press and Musica Baltica, familiar names in the music publishing world.  Among the Oxford University Press catalog is choral music of John Rutter, David Willcocks, and Bob Chilcott. Musica Baltica highlights the music of over sixty composers from the Baltic states, with names like Ēriks Ešenvalds and Juris Karlsons producing fantastic new music.

C.F Peters continues to find new musicians from around the world and new markets for their music. Interest in Western classical music has grown in China and Japan in recent years, and Peters is well positioned to bring that music to them. They are also striving to bring East Asian music to the rest of the world, creating an exchange of culture through music. Truly, there is no higher mission in the musical world than that.

Facebook
Twitter
Pinterest
WhatsApp
Previous article
The Community Choir Spotlight Shines on the Circle City Community Choir
Next article
Building an Advanced Music Lab in your Classroom, Part 3: Do It Yourself