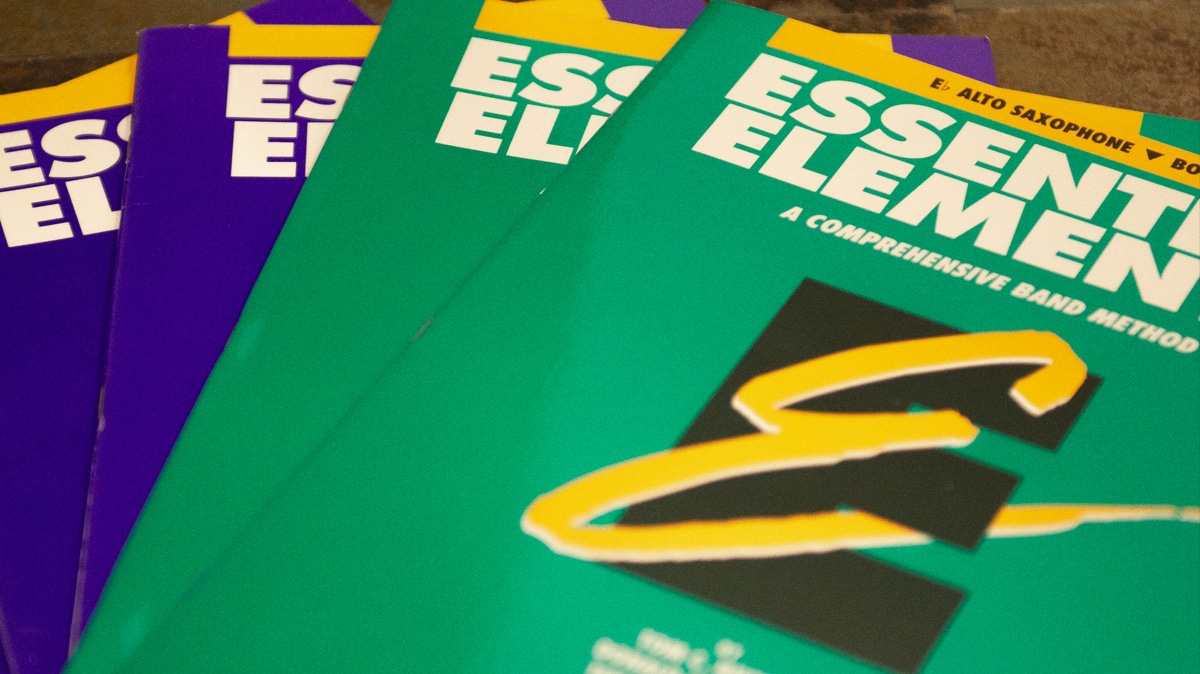 How It Got Started: Essential Elements for Band

Think about the way we learn music – the methods and best practices used in the vast majority of music classrooms.  The teaching approaches are not all the same, but there are a lot more similarities than differences. Go back to the 1980s and earlier, though, and you will find systems that are far removed from what we have today. Changes happened over time in large thanks to the inception of the Essential Elements for Band method books.

The Essential Elements series was the brainchild of musicians Tom Rhodes and Don Bierschenk. Rhodes was the band director at the University of Texas when he met Bierschenk, a student at the school and a private teacher. When Rhodes left the university for Southern Music Company, he hired Bierschenk to work there as well. After eight years with Southern, they started their own company, called RBC Music Company.

It was at RBC that the two began to design a new curriculum for beginning band students. Starting with what they considered to be the essential philosophies of learning music, they began developing strategies for presenting important concepts in better ways, making learning easier for students, while also making it more fun.

“Most band methods either moved too slow or too fast in the learning process,” said Rhodes. “There was almost no reinforcement of previous concepts introduced. Most methods were copycat methods and did not offer any new ideas or learning techniques. We followed some of the ‘essential elements’ introduced by the Texas Education Agency as school guidelines and combined them into one method book.”

“Rhythm is the secret to good sight-reading habits and precision in playing an instrument.”

One of the major differentiators for the first Essential Elements was the early introduction of rhythm and pulse concepts.

“Most band methods introduced pitches with whole notes followed by more long tone exercises with little or no emphasis on rhythm or subdivision of the beat until much later in the method,” said Bierschenk. “Besides not being interesting to the student, it overlooked an all-important concept of learning music: we felt that rhythm and counting were critical in establishing a good basis for all future music learning.”

“Rhythm is the secret to good sight-reading habits and precision in playing an instrument,” added Rhodes. “Essential Elements focused on tone production as the first step in starting on an instrument. After the pitch is established, the rhythm learning begins. Essential Elements was the first method to use a quarter-note start-up. This is the basic beat of rhythm. Students had a difficult time starting with whole notes that did not establish a counting or rhythmic feel.”

To back up their theories on the importance of learning rhythm early in the process, Rhodes and Bierschenk held trial tests with real music classes. What they found was that the students who started with learning quarter notes rather than whole notes were more accurate music readers and had much better rhythm control. Students also benefited from an earlier introduction to articulation and tone production, including proper ways to form sounds when playing wind instruments.

That was far from the only innovation of these first Essential Elements methods. The books also contained a number of ensemble and full band arrangements to allow young musicians to experience playing together with their own section and side-by-side with other instrumentalists in many combinations. Young bands could even use these pieces for concerts early in the school year.

“Many books have copied this concept since Essential Elements was introduced, but this was a pretty radical idea at the time,” Bierschenk said.

Also radical for the time was the inclusion of music theory and history. Used as a means to give cross-curricular value to music lessons, this also helped give greater context to each idea and music selection in the book.

“Music theory and music history were never a big part of beginning band books, but Essential Elements made these concepts part of the full learning curriculum,” said Bierschenk. “Musical examples would contain blurbs about past historical events – not just music – to tie music to events being learned about in history class, making it much more cross-curricular than any previous band method. Instrument history was also included.”

For a resource like Essential Elements to have remained successful for so long, however, it would take many more innovations and a continuing dedication to providing the best possible approaches and information. After the success of their band methods, publisher Hal Leonard and other music pedagogy experts began to expand into strings and choral education as well, bringing their groundbreaking methods to music students of every ensemble.

Also unique to Essential Elements at the time of its inception was the Director’s Communication Kit, a “press pack” for parents that included a series of letters to parents about the band program and student progress. These innovative and motivational items were introduced by co-author Tim Lautzenheiser. Before cellphones, this was an important concept that helped connect student, teacher, parent, and school in a way they had not been connected before.

Not satisfied to rest on their laurels, the minds behind Essential Elements have continued to innovate with each new edition of their method books. Resources are updated with fresh ideas and learning opportunities, while the technology associated with the books continues to advance.

“Although the printed music book is still the foundation that this music learning platform is based on, the online resources that now exist to supplement the method make it a state-of-the-art curriculum that is truly relevant to both the current band student and band teacher,” Bierschenk said of their recent innovations.

“The free online resources that are available to Essential Elements book owners offer many new ways to learn and teach music. The web-based technology can be used anywhere, anytime, and on any device,” Bierschenk added. “With the online student music studio, music can be played, recorded, and submitted to the teacher. The studio also allows for playback, tempo control, and tuning, as well as music composition.”

After nearly 30 years, the team behind Essential Elements continues to innovate. The methods owe much of their success to the hard work and dedication of Don Bierschenk and Tom Rhodes who, though they have retired from active teaching, have left a lasting impression on music education and the minds of musicians around the world.

In the interest of full disclosure, it should be noted that RBC Music Company is now part of J.W. Pepper & Son, Inc.

Planning for contests and festivals is a huge undertaking. There is so much for you, your students, and their parents to remember, and there...
© Newspaper WordPress Theme by TagDiv