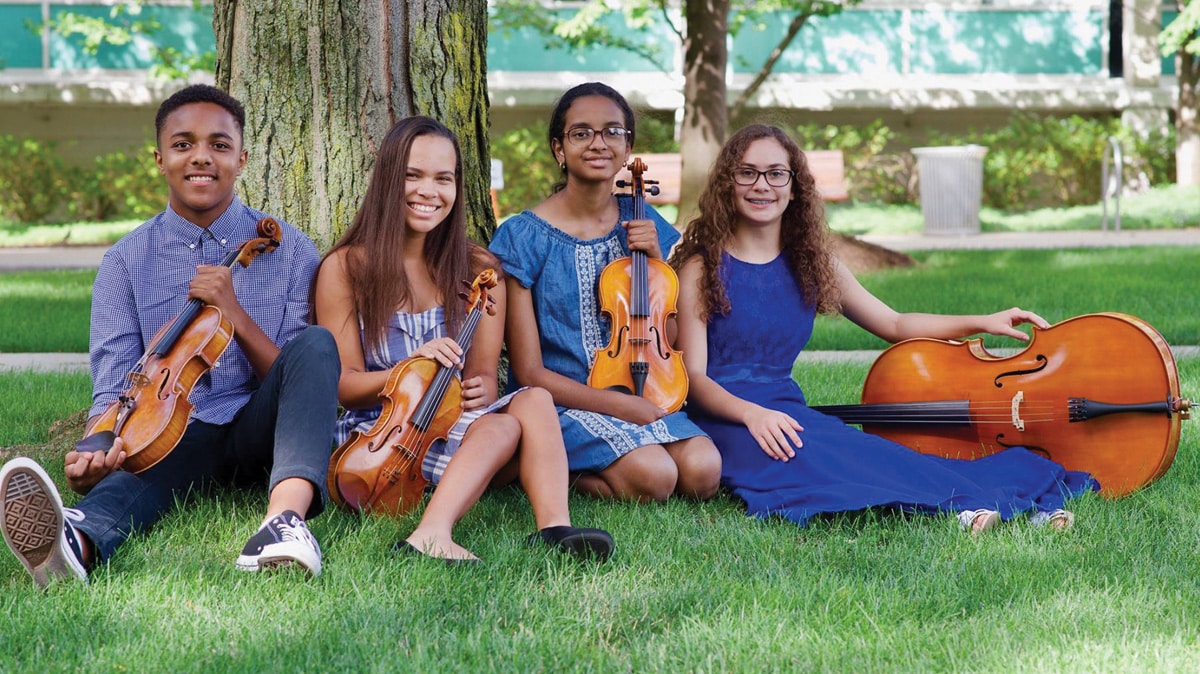 Aaron Dworkin says he did not know about many black classical composers before he went to college. Long before he was named a MacArthur Fellow or became a University of Michigan dean, Dworkin lived in a small Pennsylvania town where he didn’t see other young men of color like him playing string instruments. The day Dworkin’s professor pulled works by William Grant Still off the shelf, a whole new world was opened up to him.

Such moments would lead Dworkin to launch one of the most successful programs in the United States for promoting diversity in the arts – the Sphinx Organization. It gives African American and Latino students and professional musicians both educational and performance opportunities in classical music.

“I began reflecting, and throughout my whole life I had encountered only a handful of people of color in school – and I was one of very few classical string players,” Dworkin said. “I wondered, what if competitions, scholarships and awards were given that encouraged musicians of color to advance and to play music by composers of color?”

Dworkin began building his initiative in 1997. Over time his nonprofit organization grew by leaps and bounds. It now serves more than 100,000 students and artists each year and works with about 100 partners, providing music opportunities for students across the United States, with programming abroad. This includes summer performance programs for teen musicians.

In some cases, finding classical music repertoire by composers of color has proved to be a challenge – not because it doesn’t exist, but because it isn’t always readily available in published form. This problem prompted Dworkin to lend his support to another nonprofit that is aiming to overcome this challenge.

“Music was selected on its own merits. It would defeat the purpose if music was chosen just based on someone’s background, as interesting at that background may be.” – Violinist Rachel Barton Pine

The Treasure Hunt for Musical Gems

Unlike Dworkin, renowned violinist Rachel Barton Pine, who is also a Sphinx board member, was exposed to a large variety of music in the diverse Chicago neighborhood where she grew up. In the late 1990s when she released an album, she naturally included music from Afro-French composers and other writers of color and was surprised by the reaction. She started getting reams of requests for information. She realized much of the existing pedagogical materials for violin was limited in its composition offerings.

Pine says certain method books have included little to no classical music pieces by non-European composers, women composers, or even 20th century composers. She set out to recognize the important contributions people of African descent have made for centuries.

In 2001, she started an organization called Music by Black Composers (MBC) through her Rachel Barton Pine Foundation and began searching for information on classical music composers and their pieces. This has involved many years of work leafing through boxes of unsorted papers in libraries, museums and the homes of composers’ descendants.

“Unfortunately because of historic discrimination as well as other factors, a lot of the music is out of print or has never been published in the first place. Some of it is in manuscript,” Pine said. “There is a lot of work to be done to get this music ready to be performed as well as to spread awareness as to what it is and where it is located.”

One of the first steps has been to have an advisory committee, including Dworkin, review the newly discovered music for possible inclusion in a new series of instrumental books for students.

“Music was selected on its own merits. It would defeat the purpose if music was chosen just based on someone’s background, as interesting at that background may be,” Pine said.

The goal is to have books with pieces for a variety of levels and instruments, beginning with compositions for the violin. The first violin book Music by Black Composers, Violin Volume 1 has been completed and more are in the works.

Also, this year Pine and her foundation launched an ever-expanding directory of living black composers and published a coloring book featuring the portraits and biographies of 40 black composers.

Signs of Success  – The Launching of New Careers

One of the composers featured in MBC’s new publications and its directory got to where she is with the help of the Sphinx Organization. Jessie Montgomery won an award in a Sphinx competition when she was 17, and then kept going back. After attending The Juilliard School, she returned to Sphinx as a teacher, orchestra musician, and commissioned composer. She says the program has been invaluable for her and for the students she now teaches.

“It’s important for everyone to have a role model of some kind,” Montgomery said. “Students need people around them who are succeeding at a high level and who represent them culturally.”

With that in mind, one of Sphinx’s goals is to increase the number of black and Latino professional musicians who land positions in America’s professional orchestras. That percentage has increased from 2.7% in 1998 to 4.6% in 2016.

“We have moved the needle in that orchestral measurement, which is one of many impact areas we assess,” Dworkin said. “More important factors are not necessarily quantitative, but essential to our impact. La familia – our sense of community – is most important as it has built, literally, a family – a lasting movement which has perpetuated change. Our first generation of Sphinx participants may have initially felt incredibly isolated, but our current generation of young artists has never known a world without their Sphinx family.”

This family has grown to include numerous highly successful musicians. Aside from Montgomery, Sphinx award winners and participants include Joseph Conyers, the acting associate principal bass for The Philadelphia Orchestra; Rosalyn Story, violinist with the Fort Worth Symphony; and Ecuadorian cellist Francisco Vila, who has performed around the world and is principal cello for the Aalborg Symphony Orchestra in Denmark.

And these musicians are just the tip of the iceberg. Tens of thousands of students have benefited from the programs at Sphinx, and they in turn are giving back to this organization and others that aim to bring music lessons to all corners of the globe.

Music Education Programs for Those in Need

Numerous Sphinx alumni remain actively involved in their communities, not only through Sphinx but also through their leadership roles in various programs for youth in need. There are many organizations working to bridge socioeconomic barriers – one such is the international organization El Sistema which has inspired music outreach across the globe.

El Sistema was created in 1975 in Venezuela to provide free classical music programs to children living in poverty. It has since spread to numerous other countries, including a large El Sistema USA program. It provides music education in some of the most underserved communities in the nation, promoting intense ensemble training and youth development.

It joins other programs such as the Harmony Project of America in providing music opportunities to students in need. Pine says regardless of how students are reached, she hopes they are reaping the benefits of seeing, hearing and playing music from a diversity of composers.

“When I work with underrepresented populations, parents get really excited when they realize this repertoire exists,” Pine said. “They are not just excited about the program but also the music itself.”

Composer Billy Childs, an MBC Honorary Committee member, has been a strong supporter of these efforts. But he still wants to see a day when programs like Music by Black Composers will not be needed. As he says, “I sincerely hope that one day projects such as this, which focus on an underexposed segment of the classical composing world, will no longer be necessary because every good composer will be regarded with equal seriousness, regardless of race.”