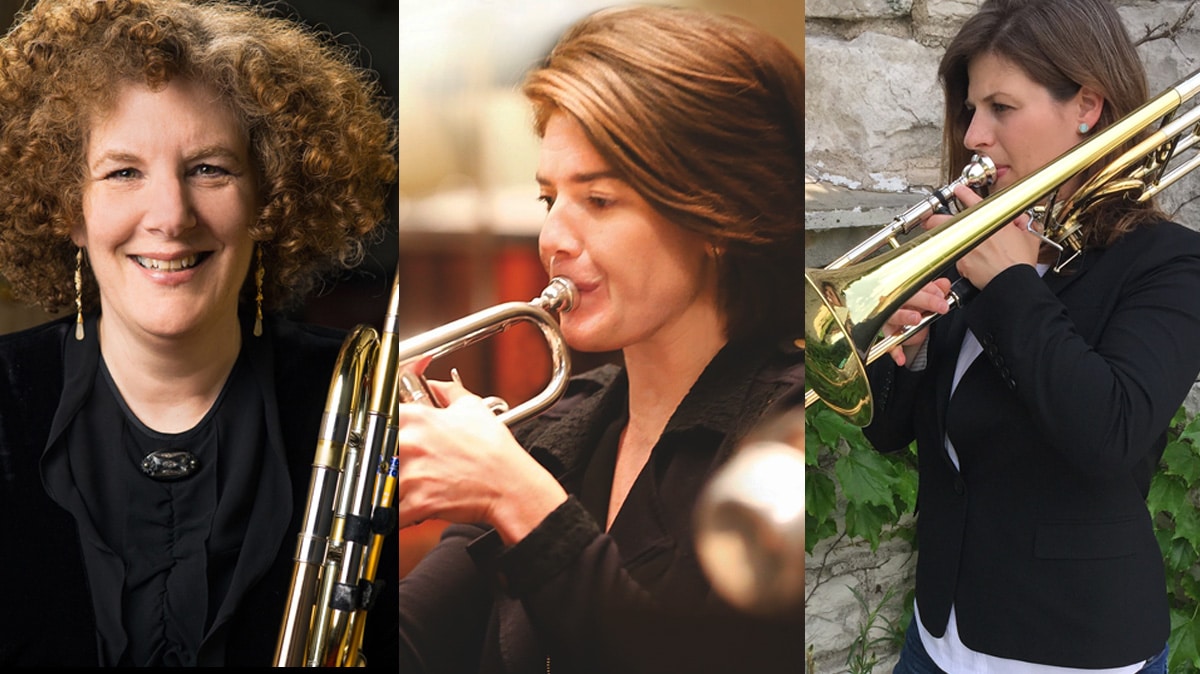 The Women in the Brass Section: How They Found Success

Trombonist Amanda Stewart compares it to a slow-moving glacier – the gradual acceptance of talented women playing brass instruments in the United States’ most renowned orchestras. Stewart is the associate principal trombone for the St. Louis Symphony Orchestra and is among the 3% of trombone players in the nation’s top orchestras who are women. When she was younger, she did not realize women had a small presence in the brass sections of professional orchestras.

“When I was in high school, there was another girl who played the trombone,” Stewart said, “so I didn’t know it was an anomaly.”

The opportunity for Stewart and other women to break one of the highest glass ceilings in music came after several changes in the orchestra and music education worlds. These have included better introductions to instruments in school, the use of screens during orchestra auditions, and the general progress of women in the workforce.

The St. Louis Symphony has been at the forefront of the changes, being the first leading U.S. orchestra to employ slightly more women musicians than men. Along with Stewart, its brass section also includes French horn player Julie Thayer and principal trumpet Karin Bliznik, who replaced retired trumpeter Susan Slaughter – a music legend who held the position for 37 years. Bliznik remembers when she was a teenager, her dad showed her a recording of the St. Louis Symphony playing An American in Paris.

“I loved that recording. I remember my dad telling me the woman playing the trumpet solo was Susan Slaughter. Even today it remains one of my favorite recordings. That one stuck with me,” Bliznik said.

That chance to see a woman reach this level of success was golden. Centuries of gender stereotyping in instrumental music have put barriers in the way of many trailblazers.

“I got heat for it from everyone. Everybody said it was a ‘boy’s instrument.’ I questioned that right from the beginning.” – Rebecca Cherian, Co-Principal Trombone, Pittsburgh Symphony Orchestra

The Battle Against Gender Stereotyping in Instrumentation

Rebecca Cherian, who has been co-principal trombone for the Pittsburgh Symphony Orchestra for 30 years, has seen many of these challenges firsthand. She struggled to name a mentor when asked who inspired her on her journey. She said she was the only girl in her middle and high school who played the trombone, and she repeatedly faced ridicule for it.

“I got heat for it from everyone. Everybody said it was a ‘boy’s instrument,’” Cherian said. “I questioned that right from the beginning. I was a rebel, and I liked challenging everyone who said it couldn’t be done. I didn’t see any reason why I couldn’t play trombone.”

Despite determination and tremendous talent, Cherian still faced discrimination for many years. She said she had some professional conductors say things that were “utterly ridiculous.” She had one conductor scold her for five minutes during a rehearsal, alleging that women should not play the trombone. Then she had another well-known conductor surprise her during a different rehearsal.

“He stopped the entire orchestra when he saw me, and he said ‘What are you back there – a boy or girl?’ I was pretty insulted,” Cherian said.

She remained in the classical music world by landing jobs with orchestras that were laser-focused on talent. This included the opportunity to play with the Israel Philharmonic Orchestra under the direction of Leonard Bernstein.

Despite this success, it took ten years of auditions before Cherian was given the chance to win a job in a top U.S. orchestra. The Pittsburgh Symphony listened to a recording of Cherian playing and granted her an audition, after which she won her current role.

“During that decade of taking auditions I was usually one of two or three women at most who showed up, and I was always the only woman in the finals,” Cherian said. “By the time I went to audition live in Pittsburgh I knew that if I did not play 110 percent of my ability and significantly better than any of the men, I would not get this job or any other orchestra job, especially a top ten orchestra.”

Stewart entered the field many years later, but she also faced some questionable moments. At some level, Stewart benefited from the use of screens, which conceal a person’s identity during auditions. The barrier forces the panel to judge based just on what they hear. The screen often comes down though in the final rounds. She says this is when some of the problems have occurred.

“I made it to the final round of one audition, and a panelist told me later another judge openly questioned whether a ‘small girl’ could ‘keep up’ with the rest of the section,” Stewart said.

She was the runner-up for that job.

They recruited more than 600 kindergarteners and fourth-grade students for two studies that looked at eight instruments associated with gender stereotyping in the past. This included the trumpet and trombone that have been stereotyped as being masculine.

They found the kindergarteners had already formed stereotypical preferences, with few girls in the control group picking so-called “masculine” instruments. This changed in the fourth grade when girls seemed more flexible, particularly girls who were in a group that was shown older girls playing brass instruments.

In general, they found that children shown videos that bucked stereotypes tended to be more open to trying different instruments. The experiment did not work as well for boys, who were more resistant to trying the “feminine-stereotyped” instruments. However, the overall consensus seemed to be that giving both boys and girls positive mentors helped – seeing someone who looked like them playing an instrument made a difference. This was not a benefit many girls had throughout most of history.

Gender Stereotyping in the Past

Centuries ago it was considered unladylike for women to play most instruments. Historical documents have references claiming that it is unbecoming for a woman to play an instrument that would “disfigure” her face or one that might cause her to move her body in any dramatic fashion. Brass instruments in particular were associated with the all-male military, which seemed to make them even more off limits.

The exception was the piano, since society seemed to think a woman could look “ladylike” while sitting down and playing the instrument.

“Women can sit still by the piano and play without having to twist their body,” music researcher Lise Karin Meling told the Norweigan publication Kilden. “They may sit in graceful and feminine positions… and show off fashionable clothes.”

Times slowly changed when female prodigies began to make their marks, such as French violinist Camilla Urso who begged her parents to let her play the violin. Over time, as women started to pick up these instruments, a shift occurred.

For unknown reasons, new gender stereotypes began to develop – ones that were still being openly shared in the classrooms of the 1970s. As time moved forward, teachers began to try to take gender out of the equation. A realization set in that it’s a really bad idea to give any verbal indication an instrument is more popular with girls or boys.

Teachers and Mentors Who Made a Difference

Bliznik fully benefited from this shift in thinking. She says she grew up in a great school district in Brockton, Massachusetts where the fine arts were fully embraced and gender stereotypes seemed nonexistent. Beyond high school, she had a long list of both male and female mentors, including principal trumpet player Tom Rolfs of the Boston Symphony Orchestra, who assigned Bliznik full symphonies to practice. She also had female mentors who in retrospect encouraged her in ways she did not realize at the time. Seeing women at the top of their fields was an inspiration.

“Similarly, there are female tennis players playing the sport because they were inspired by Serena Williams in some way,” Bliznik said.

Like Bliznik, Stewart also had male and female mentors. These included her first teacher Harold Hudnall who began instructing her at age six when she could not reach beyond fourth position on the trombone. He adjusted lessons for her age, and by the time she was in eighth grade he sent her to a higher-level teacher – Dr. Keith Jackson at West Virginia University.

“I found out later that Dr. Jackson’s intention was to hear me play and then pass me off to a teaching assistant. Two hours later, he asked me when I was coming back for a lesson with him the next week,” Stewart said. “He is an extraordinary human being. I would not have gone to Juilliard without his help.”

In Cherian’s case, she became the mentor. She teaches at Carnegie Mellon University and was one of the women who founded the International Women’s Brass Conference, which encourages female brass instrumentalists. She has worked very hard to treat all her students the same way. After many years of struggle, she now can convey to her students how happy she is that she never let any naysayers stop her success.

“I wasn’t going to quit because of them, I hung in for ten years before I got an orchestra position and luckily things got better,” Cherian said. “In the past 10 to 15 years, my job has been a pleasure. My colleagues are great. It’s a whole different environment.”