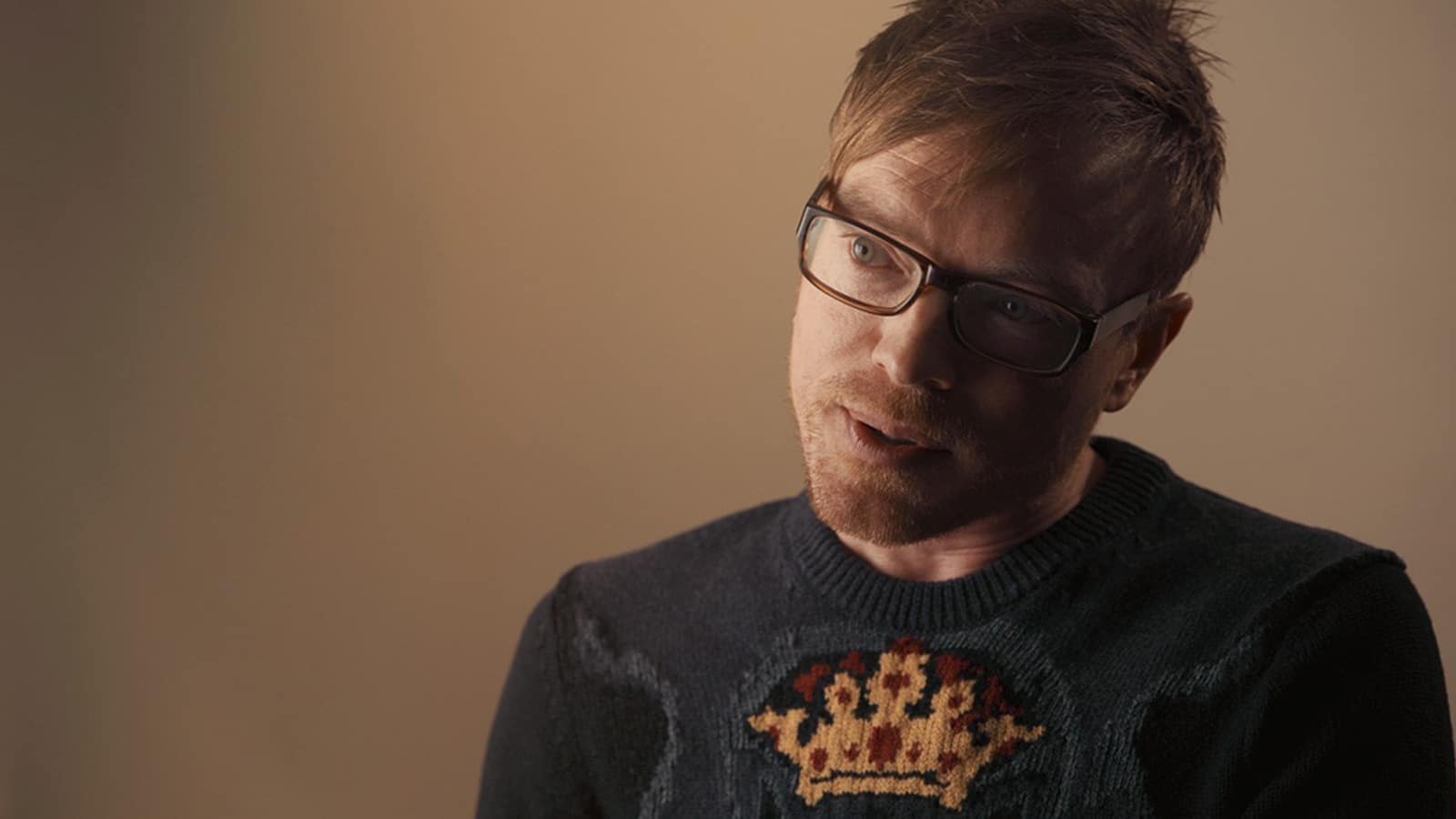 Though his mother played the flute and the family owned a piano, he never played either instrument – partly due to the experience of his older sister, Lisa. She hated the piano, and as Mackey relates, he did not care for it either.

“I would choose to go to the piano and try to play it, but it didn’t sound like the records we had. So, I would cry and run away from the piano. And they thought, ‘Oh no, we’re going to ruin him, too!’ And they would keep me away from the instrument.”

Rather than study music formally, Mackey soaked it in from all the music around him. He spent many nights listening to his mother play flute for community orchestra rehearsals and heard her sing in a number of church choirs. At home, he would spend nearly all his time listening to the radio. The pop music of the early ’80s had a huge influence on his later compositions.

The journey from music listener to music creator started with an offer from his grandfather, who owned a music store. An early adopter of emerging technology, Mackey’s grandfather offered to teach him to write music using a program called Music Instruction Set. The 11-year-old Mackey jumped at the opportunity.

“I was surrounded by music,” Mackey says, “but never had anything I could do with it, because I never had an instrument. But now I had a computer, which became my instrument.”

His first piece, written at the age of 11, was inspired by the movie Amadeus. After seeing the movie in theaters, Mackey decided he wanted to be just like the composer. In fact, his first piece was based on Mozart’s death scene. It was called Lacrimosa, and while it employed some odd instrumentation (including clarinet in D), it served as his first step toward professional composition.

From Independent Study to Juilliard

Mackey received only sparse direction as a young composer. One of his mother’s friends had a Ph.D. in music and would, from time to time, give him lessons in composition. Though he never learned theory, throughout middle school and high school he did receive critiques that helped him learn about dissonance, contrast, and many other musical principles.

During high school he wrote a number of pieces, including one for show choir and another for violin and piano. Classmates helped him record both of these songs so he could use them as audition pieces. Most schools required music composition majors to be proficient in some kind of instrument, but Mackey was able to find a few that did not. In the end, he settled on the Cleveland Institute of Music (CIM), which allowed him to apply by submitting his portfolio and passing a music theory test. Mackey studied under a number of excellent music instructors, including Donald Erb, who was already an accomplished composer.

“I was so hungry to finally have formal training that I absorbed it like crazy and was so, so excited about it.”

To better understand how to orchestrate music, Mackey spent time in the music library with a CD player and a score in front of him. He would follow along with each part as he listened to the music to learn how the parts interacted and understand how all the instruments could play together.

His diligence at CIM led him to pursue his master’s at Juilliard where he was classmates with a number of other rising composers, including Eric Whitacre with whom Mackey has remained friends. While at Juilliard, he honed his craft in composition, focusing mostly on orchestra music. As time went on, however, his focus would change.

“If you’re an architect and you are going to make a building, you don’t start by picking out a really cool lamp. What you do is you ask, ‘What’s the purpose of this building? How big does it need to be? What’s it made of?’ and then you make the building. The last thing you do is pick out the furniture. The notes are the furniture.” – Composer John Mackey

Mackey’s first professional compositions were written for dance companies. His eventual exposure to band composition came while working as an artist in residence with a youth orchestra in Minneapolis. During the final week of his residency, Mackey took the time to attend the College Band Directors National Association (CBDNA) conference in the city to see what accomplished college groups could do, and he was blown away. While there, he handed out CDs with his compositions to a number of different ensembles in the hope of generating some interest in his work. Within a week, he got a phone call from the band director at Emory University, Scott Stewart.

“He said, ‘You have this orchestra piece called Redline Tango that should be a band piece.’ And I said ‘Oh, Mr. Stewart… it should not.’”

Though he was resistant at first, Mackey eventually accepted the commission to transform Redline Tango from an orchestra piece into a band piece. It premiered at the CBDNA Southern Division conference and became a great success. Within a year, Mackey became a full-time composer touring the country, seeing new groups and writing music.

Everything Mackey writes starts with a commission. He finds that these commissions are very emotionally and mentally taxing, and satisfying enough that he does not need to write in between them. In fact, he finds it necessary to take breaks in between commissions in order to prepare himself for the next one. The process for writing each piece has a lot to do with what sort of piece is asked for, be it an opener, a closer, a ballad, etc.

“I learned from John Corigliano in graduate school that if you’re a composer, you should think like an architect. If you’re an architect and you are going to make a building, you don’t start by picking out a really cool lamp. What you do is you ask, ‘What’s the purpose of this building? How big does it need to be? What’s it made of?’ and then you make the building. The last thing you do is pick out the furniture. The notes are the furniture.”

For example, one particular piece called The Frozen Cathedral needed music for bass and alto flute and called for “surround sound” percussion to give the audience the impression they were sitting among the instruments. To achieve this feeling, Mackey begins with only the bass flute, which is one of the quietest instruments there is. This encourages the audience to lean in to hear the music. What comes next is a gradual building from barely audible music to loud percussion and winds.

“A piece that’s just loud or just quiet is not all that exciting. It’s having that push and pull of dynamics and harmony that’s fun.”

John Mackey self-publishes all of his works, out of both necessity and choice. Self-publishing allows him to hold on to his copyrights, making selling music this way much more practical. There are challenges, though, as there are in anything. One of the big challenges Mackey faced was in binding scores and printing. At first, he was doing this all on his own, but eventually he hired others to help. That took ten years to put into place.

His first high-volume piece was a song for middle and high school bands called Undertow. Unlike most college bands who rent the works they perform, middle and high school bands generally purchase their band sets. To reach this market, Mackey followed the advice of a friend and reached out to J.W. Pepper. Within a few days, Pepper received orders for around fifty sets – far more than Mackey could print on his own. He needed a printer, but asking for only fifty copies presented a problem:

He ordered the five hundred sets, and the music arrived on a fifteen-hundred-pound pallet of music in the back of an 18-wheeler. Mackey had to pay the driver extra to use a pallet mover to take the music into his garage. The one piece filled half of his garage, and he realized that finding a new way of doing things would be vital. This led him to change his methods. Since he could not store so many pieces – especially as his catalog grew – he turned to Pepper to help him with printing and distribution. He still carries some copies of his music, but now Pepper stocks his music in its warehouses and ship orders much faster than he could in the past.

In addition to being in charge of printing and distribution, Mackey is also his own marketing department. Any self-publisher must network with people across the country, making contacts and forming relationships with other musicians and directors.

“You have to be prepared to talk to people if you are going to self-publish. I love the energy of being around music conferences, but I also feel like if I’m not there I will be forgotten quickly.”

“I don’t think I could function as a self-published composer anymore with a catalog this size if Pepper wasn’t managing it for me.” – Composer John Mackey

Snarl was written as a gift to an organization called United Sound, a program that allows students with special needs to play in a band alongside general education students. Mackey’s motivation came from his own struggles with bullying in his younger days. He imagined the struggles children with special needs deal with. His response was to create a strong piece that encourages others to be bold.

His only choral piece, The Rumor of a Secret King, came from a request made of him by Eric Whitacre. Though it was first written as a choral piece, Mackey decided to make it into a band piece as well. It was played at The Midwest Clinic this past year and was very well received.

Mackey is currently working on converting the first movement of his work Wine-Dark Sea, formerly called Hubris, into a stand-alone band piece. It will be in a more standard meter, making it playable by more ensembles. It will be released this spring.

“Working with Pepper has allowed me to remain self-published,” Mackey says. “I don’t have to turn over control to anybody else, and I can retain all the copyrights – it’s been an ideal model for me. I don’t think I could function as a self-published composer anymore with a catalog this size if Pepper wasn’t managing it for me.”

To hear more from John Mackey, visit our interview playlist.

0:38 Learning to compose without playing an instrument
3:56 Listening and learning on the radio
5:20 Learning from those around you
6:32 The first piece John Mackey ever wrote, Lacrimosa