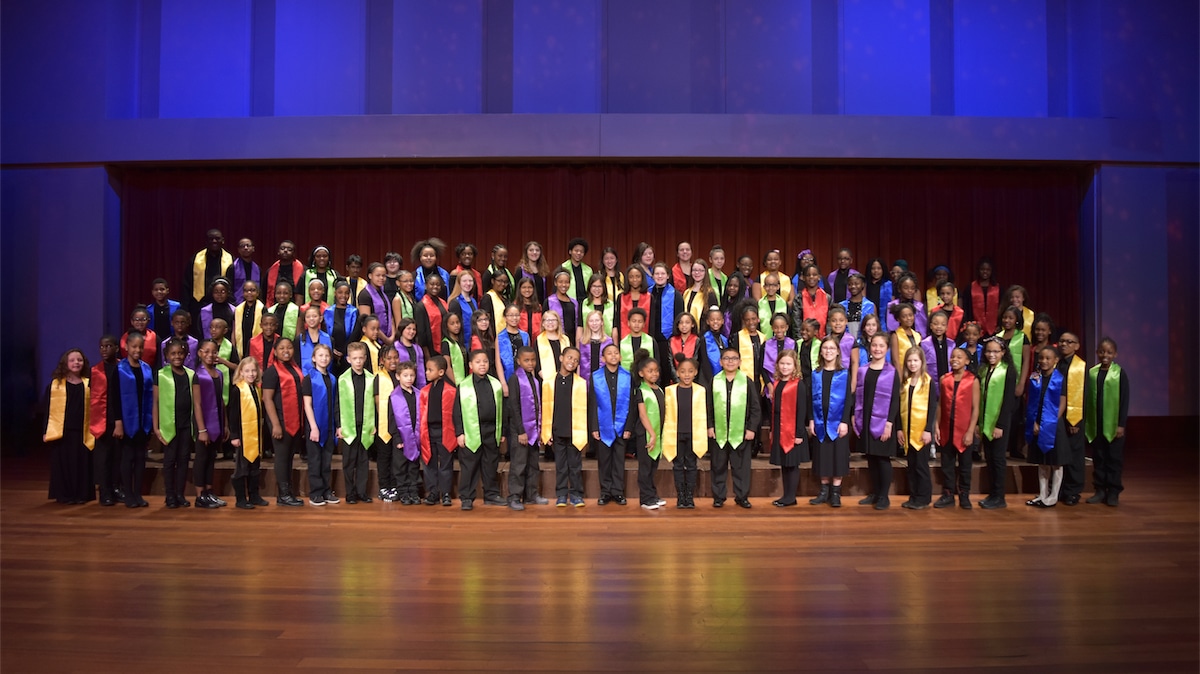 The Detroit Children’s Choir is made up of over 300 children, grades 3-12, who have a passion and love for singing. Choir members come from a variety of cities in Southeast Michigan, representing a range of diverse cultures and backgrounds. Children receive music literacy, sight-reading skills, and vocal technique instruction along with the opportunity to perform throughout the Detroit metro area. The music is selected to engage children in singing, including a wide variety of music of American heritage, classic children’s choral works, and texts in foreign languages. The Detroit Children’s Choir is “the most inclusive choral music program in the state of Michigan,” and it is committed to developing young leaders who will bring about positive change in the region.

The mission of the Detroit Children’s Choir is to use the power of choral music education as a cultural platform to unite children of diverse backgrounds throughout metro Detroit. The organization’s aim is to provide experiences through choral music education that will enrich the lives of Metro Detroit’s youth and communities, ultimately shaping confident, focused, and expressive leaders.

The Detroit Children’s Choir (DCC) organization was founded in 2006 by Carol Schoch, who identified a need for quality choral musical experiences targeted toward underserved youth in Detroit. At that time, there was no organization that addressed these critical needs. What began as a single in-school program ten years ago has transformed into an organization that now boasts nine different choirs in schools and neighborhoods across Metro Detroit. Today, the Detroit Children’s Choir is Michigan’s unique, inclusive community-wide choral music education program serving children in grades 3-12. DCC has expanded each year to serve additional students through its in-school, neighborhood and civic ensembles. Last season’s membership exceeded 300 youth participants and consisted of children not just from the city of Detroit but also including surrounding areas such as Macomb, Oakland, and Wayne counties.

The in-school programs bring DCC directly into the students’ educational environment. In partnership with Detroit Public Schools and other regional systems, these ensembles provide a solution for schools that desire to fit choral music education into their curriculum. These rehearsals include the same robust curriculum as neighborhood choirs, with sequential music literacy, sight-reading skills, vocal technique training, and performance opportunities. Students from the in-school program perform annually on the Orchestra Hall stage as part of the Detroit Children’s Choir’s Annual Spring Concert.

Because of the strong partnership with the Detroit Symphony Orchestra, the DCC created a Civic Choir program to extend their reach out into the metro Detroit area. The Saturday Civic Choir participants join the Detroit Symphony Youth Orchestra students to conduct three high-profile vocal and instrumental performances called the Community Youth Experience Family Concerts. These are held each fall, winter, and spring on the Orchestra Hall stage. Their advanced ensemble, Singers in the D, (grades 6-12) represents the DCC at various events throughout the community.

A wide array of experiences have been provided to the more than 3,500 participants to date, including major performances for the Detroit Tigers and Detroit Pistons, the annual holiday performance for Governor Snyder, multiple engagements during Noel Night in Midtown, annual dates with the Detroit Youth Symphony and Detroit Symphony Orchestra, partnerships with other nonprofits such as the Detroit Science Center, Detroit Institute of Arts, St. Patrick’s Senior Center, World AIDS Day Detroit, and appearances with well-known Michigan-based artists such as vocalists Aretha Franklin, Jill Jack, Greg C. Brown and Joe Reilly.

In addition, the DCC offers their very popular Detroit Beatz workshop in the early part of each calendar year and features a day of breakout sessions in which students can explore the roots of true Detroit music genres – Motown/R&B, vocal jazz, Broadway in Detroit, techno/electronic dance music and a special songwriting class.

The Detroit Children’s Choir Artistic Director is Eric Taylor. Throughout his career, Eric has served as a choral conductor and professional singer throughout Metro Detroit and the United States. Prior to the Detroit Children’s Choir, he was the Vocal Music Director at Notre Dame Marist Academy in Pontiac. In addition, Eric served as Graduate Assistant for the Wayne State University Choirs under the direction of Noah Horn.

The Detroit Children’s Choir Executive Director is John Joanette. For more than three decades, John has successfully founded, directed and consulted with dozens of not-for-profit organizations in three states – Michigan, Indiana and Maine. His life’s work has focused on building strong coalitions and community involvement with fine arts organizations as well as agencies involved in numerous human service and civil rights causes.

Performances over the past couple seasons have included the following literature:

For more information, please visit The Detroit Children’s Choir on the web at http://www.detroitchildrenschoir.org/