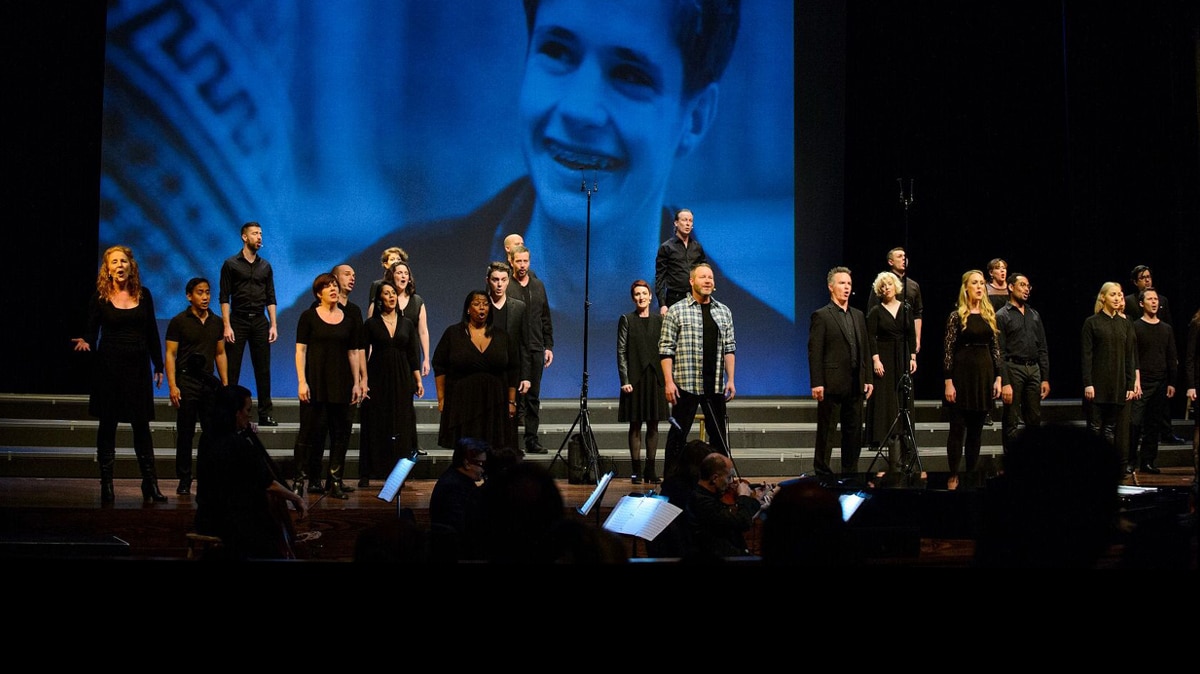 Composer Craig Hella Johnson calls it the “long sacred silence” – his way of describing a common audience reaction after choral performances of his recently published composition Considering Matthew Shepard.  In an age when hate crimes are on the rise and divisiveness is rampant, Johnson’s work raises deep questions about our humanity. It focuses on how people can learn to love those who are different from them. Audiences often pause in silence before applauding; such is its impact. During a performance at the University of Southern California this year, one student performer described the reaction this way:

“After the last movement, when the house was dark and quiet – that moment was special. No one talking; no one coughing – almost a supernatural experience. My roommate was at the performance. He was worried he would cry and disturb others – turns out everyone else was crying.”

The 90-minute production centers on an emotional story – the murder of 21-year-old Matthew Shepard. This October marks the 20th anniversary of the crime. In October 1998, Shepard was severely beaten and tied to a fence in near-freezing temperatures in Laramie, Wyoming. He was found unconscious 18 hours later and died six days after the attack. The brutal murder of the young gay man had a strong impact on the country and led to the passage of the Matthew Shepard and James Byrd Jr. Hate Crimes Prevention Act.

Johnson says he was profoundly affected by Shepard’s death, and the crime lingered in his mind for many years. Eventually he sat down and began to fashion a composition that not only remembers Shepard but also has larger community themes.

“The title Considering Matthew Shepard is important to me because I want the piece to invite consideration and reflection,” Johnson said. “The piece is of course about Matthew Shepard and what happened in his life and his death, but the piece is just as much centered around the listener. It’s an invitation to reflect on one’s own life journey and to ask some of the questions that stories like this raise.”

The score that chronicles the whole story has just been released, along with some individual songs. The publication came after spending a couple of years in workshops and being polished during performances by Johnson’s professional choir Conspirare, as well as several college and community choirs.

The Fence – “An Observing Witness”

Much of the composition centers around the fence that Shepard was tied to during the crime. Johnson says the fence forms the skeleton foundation for the passion portion of the piece.

“The fence is like an observing witness,” Johnson says. “The fence goes through its own journey. Initially it’s just out there in the blue sky, and in the next arias the fence is this entity – this being that holds the body of Matthew all night long. So we see this fence taking this journey, and we identify with that as a listener as we’re taking our own journey.”

Lyrics for the fence movements and several others come from October Mourning: A Song for Matthew Shepard by award-winning poet Lesléa Newman. The composition also utilizes passages from Shepard’s personal journal and statements from his parents and newspaper reports. It likewise includes poetry and text from librettist Michael Dennis Browne, German Benedictine abbess Hildegard of Bingen, and 13th-century Persian poet Rumi, along with Johnson.

The words are set to music performed by an SATB choir, a pianist, and an instrumental ensemble. The composition incorporates several different styles of music to share its message, including Gregorian chant, blues, indie folk, and gospel. Johnson says the styles of music are “speaking across the centuries and across the divide.”

From Despair to Hope

Key messages in the composition unfold during the performance of four individual songs that have been released.  These songs bring to life common choral themes, including social justice, hope, and peace.

Before this movement is performed, the focus of the story has been on contemptuous issues, including protestors using vile language during Shepard’s funeral. Johnson says after taking the audience on a roller-coaster ride with unsettling thoughts, he wanted to take a moment to ask the questions: How did this go wrong? Where is the place and time when we knew simplicity? Johnson says The Innocence is an oasis in the work.

University of Georgia Conducting Area Chair J.D. Burnett was struck by the song when he performed Considering Matthew Shepard with Conspirare and then brought it to his students. He says the song is raw and makes you think about how things went so wrong for the perpetrators of the crime. When and how did they lose their innocence?

Burnett also notes the song comes after sobering pieces that diminish the separation between the assailants and everyone else, along with moments that question society’s views of masculinity. Johnson says that idea is particularly significant since the piece is set in the American West where stories about John Wayne and others have created notions of what it means to be a man in this world – ideas he questions and explores.

This song is based on the story told by a sheriff who was the first officer on the scene when Shepard was found in a coma, near death. She said there was a deer lying next to the fence when she arrived. The sheriff said the doe’s eyes were penetrating – almost to say, “Are you going to take care of him?” She also noted that the ground was quite warm after the deer left, suggesting the doe had been there for a while. Johnson says the deer story gave him some perspective on the hours when Shepard likely felt utterly alone.

“It represents this sense for all that somehow in creation, even in our most alone moments, perhaps we are not alone – that creation actually sees us and attends to us,” Johnson said.

Coming out of the passion story, Johnson says this contemplative piece focuses on where we can go from here. He pivots to audience members and asks them to meet me at the fence and consider how we can move forward in hope.

This song is in the epilogue of the composition and includes a gospel chorus with a chorale in the middle. It focuses on the large tent of the human family with people of many differences coming together. Johnson says he hopes the piece helps people not only to include others but also celebrate them.

Like many performances on social justice themes, talkbacks have been held at most performances for Considering Matthew Shepard. Johnson says there has been a high level of participation in these sessions that allow the audience to ask him and other participants questions about the topics presented.

Student performers have also embraced the composition. Burnett says the universal themes resonated with his students at the University of Georgia. He says the composition “honors the truth of the situation – the horror experienced – but weaves in messages of hope and love and the possibility that we can improve as a people.”

Jo-Michael Scheibe, the USC Chair of the Choral and Sacred Music Department, echoes thoughts about the power of this meaningful piece. He says his students’ performance of Considering Matthew Shepard was one of the highlights of his long career. One of Scheibe’s graduate students, Scott Rieker, wrote Scheibe an email that summed up why the performance was so meaningful to him. He said the piece is important for all generations, including teenagers today.

To add music with thought-provoking topics to your concert, view selections from Considering Matthew Shepard, as well as music with themes of social justice, peace, and hope.

Johnson informally shared background about each of his pullout movements available from Considering Matthew Shepard during a phone call. Listen here:

PBS stations across the United States also will be airing a 60-minute performance documentary about Considering Matthew Shepard this fall. This follows the release of a short documentary in 2016. View that PBS piece here.