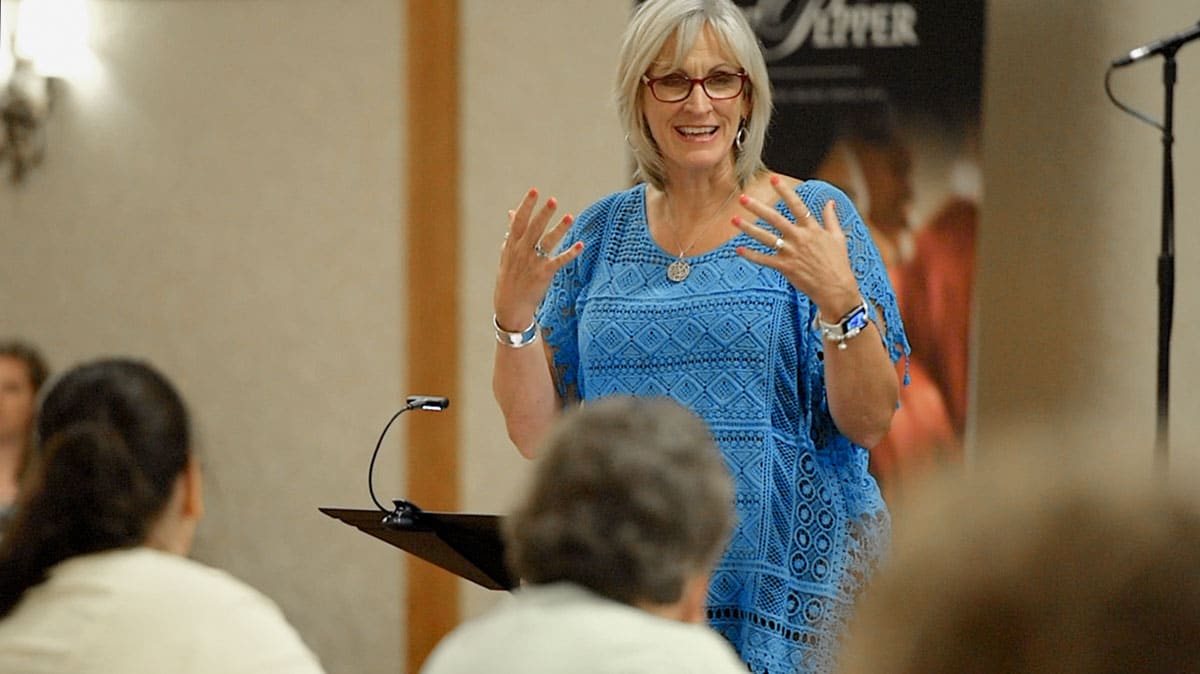 The Inside Voice: An Interview with Cristi Miller

Teaching middle school tends to be “the road less traveled” for many new music educators. Sometimes this can be due to a lack of targeted training for middle school music, but more often it’s a fear of not knowing how to work with the physical and psychological changes experienced by this age group.  Thankfully, there are experienced mentors like Cristi Miller who are more than willing to help other teachers develop skills that work for their classrooms. Miller is a frequent clinician at choral workshops such as the Joy of Singing, and Pepper was able to sit down with her to talk about teaching, composing, and inspiring the next generation.

A graduate of Oklahoma State University, Miller was first interested in theater, but after her love of singing led her to joining the university’s Concert Chorale, she decided to major in music. At her first job, one of her most significant mentors was a fellow teacher named Janis Dawson, whom she had frequent contact with at meetings and conventions.

“I don’t think she realized how much of a big part she played in my life at that time, but she was somebody that I looked up to,” Miller says of Dawson.

The input of Dawson and other teachers helped Miller to become the great music teacher she is today, and she is happy to do for others what they did for her.

“I think that as music teachers, that’s what we do best. We reach out and help,” she says, adding, “As a teacher, I’m motivated to create resources that I know will work for me in my classroom so that other teachers can benefit from that, too.”

Many of those materials focus on teaching middle school choir because it is an age group that is very important to Miller.

“Middle school is a magical time,” says Miller. Because students are still developing their concept of who they are, there is so much opportunity to influence them positively. Even though this age group is often seen as a challenge, middle school students are also extremely receptive to learning. That willingness to be taught is part of why Miller loves teaching middle school choir so much.

Miller combines her passion for middle school education with her love of mentoring young teachers by working as a clinician. A much sought-after speaker, Miller started out at reading sessions as a participant rather than a clinician.

“It was one of the best things that I did in the summertime, and it was because you just got inspired by the people that were presenting,” Miller said. “And not just the presenters, but also the participants that sit on your left and right – they have great ideas, and you can hear from them the same struggles that you have in your own classroom.”

“I think that as music teachers, that’s what we do best. We reach out and help.”

Of course, Miller gets a lot out of being a clinician as well. “As a presenter, I will always have someone come up to me and say, ‘You know, this is what I do in my class.’  And since I am still a teacher … I get a treasure out of each visit.”

Reading sessions also played a part in Miller’s journey to becoming a successful composer. She had been writing songs since the sixth grade; eventually, she began composing music for her church and performing her songs during services. However, it was not until she began teaching elementary school that things grew more serious.

One year, the elementary school where Miller was teaching decided to have a ceremony recognizing Christa McAuliffe, the teacher who was killed in the space shuttle Challenger explosion. Miller wrote Teach the Child, Touch the Future for both students and teachers to sing together at the ceremony. She also wrote a song called Honk Shoo for a short musical she wished to lengthen. Both songs were popular with her students, but she did not do anything else with them until she attended a Joy of Singing event in Texas.

There, Emily Crocker was working as a clinician and encouraged the teachers to consider submitting music to her for evaluation and possible publication. Miller decided to take the leap and submitted her pieces. Both were accepted, and she was invited to work with the publisher to refine her composing skills.

To others hoping to get into composing, Miller says, “You’ve got to keep going in one direction until something cuts that direction off, and then you can shoot off in other ways. But don’t ever stop moving forward. That is the only way you get down the road.”

In addition, she says, “Don’t get so wrapped up in your job that you forget about life.” It is important to live and to be prepared for failure as well.

“I’m not one that, if failure comes to me, I sit around and stew about it.” Rather, Miller tries to grow from her failures. If a piece is returned by the publisher, she considers what made one piece work but not another. Once she grasps that, she can strive to improve her next composition.

Of course, Miller has composed many successful and well-loved pieces. To see more from Cristi Miller, view her choral works for middle school, other compositions, and her resources for teachers. You can also see what events Miller and other clinicians are attending this year on the Pepper events page.

To hear more from Miller, view her Pepper video playlist:

0:31 Making music with family
1:40 Band is the thing to do!
2:45 Attending Oklahoma State University and singing in the chorale
3:27 The people God puts in your life
3:51 Teaching music in Oklahoma and finding a mentor
5:33 “Singing is what sustains me”