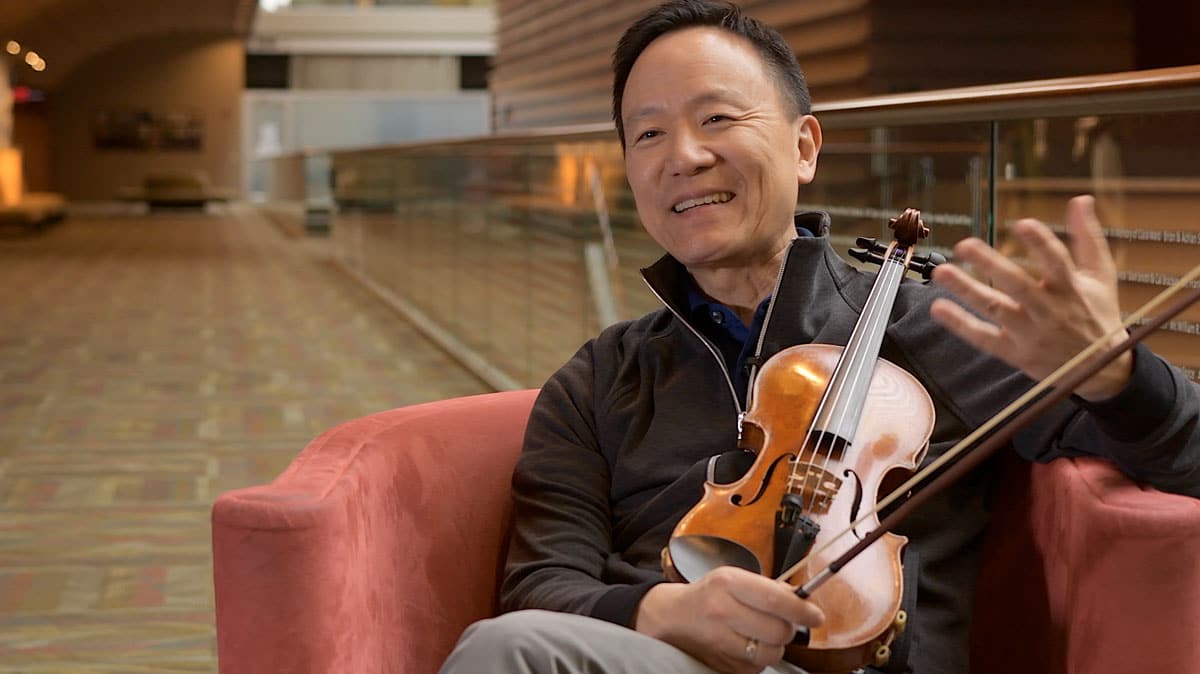 The Inside Voice: An Interview with Concertmaster David Kim

David Kim paused after playing a few exquisite bars of music on his Italian violin. The concertmaster of The Philadelphia Orchestra seemed concerned that his instrument may be echoing too loudly across the sweeping multistory lobby of the Kimmel Center, where other people were working or visiting. This moment during our Pepper interview showcased both Kim’s humble nature and his concern for others – along with his extraordinary talent.

Kim has long been recognized for his violin playing and has served as the orchestra’s concertmaster for 19 years, but it wasn’t an easy road to where he is today. Kim’s mother was a pianist who wanted to have a son who would be a world-class violin soloist. His childhood revolved around this goal. Kim says his mother gave him his first violin at age 3 and steadily increased his practice time over the years. He began with one hour a day at age 3; that increased by about an hour each year, so that by age 8 he was practicing five hours a day. She often sat with Kim during his violin practice time to ensure he was working hard.

“I cried every day because I hated practicing,” Kim said. “It was a very intense relationship.”

By the time Kim was eight he had been accepted to study weekly in a pre-college program at The Juilliard School under famous violin teacher Dorothy DeLay. The lessons required hours of travel, but Kim says DeLay inspired him and that with the educational support he was receiving he had every advantage. DeLay focused on teaching her students to teach themselves – to avoid any spoon-feeding. Kim says that foundation he received was not only important for his own future, but he has found it is crucial for all musicians.

“That’s an absolute must – good teaching and sacrificial practice,” Kim said. “I can tell when I see musicians who have not done that sacrificial period of technical practice. It’s really drudge work. It’s like musical push-ups and sit-ups and flossing your teeth.”

Kim was able to work on these skills and spread his wings more when he began attending the Aspen Music Festival each summer. One summer things went very wrong when his mother fell ill and was diagnosed with cancer the day after Kim left for camp. Her health deteriorated over the summer, and she passed away a few months later when Kim was 14 years old.

“That was difficult on so many different levels as a child; my mother had died – my practice partner, my accompanist, my chamber music partner – on all these levels it just came crashing down,” Kim said. “And I basically put the violin on hold in a way.”

DeLay provided Kim the emotional support he needed during this trying period, and with her help he kept his dreams of being a renowned violinist alive. He took that dream with him when he began attending Juilliard full time. While there, DeLay motivated him to enter a competition that would change his course for several years.

“That’s an absolute must – good teaching and sacrificial practice. I can tell when I see musicians who have not done that sacrificial period of technical practice. It’s really drudge work. It’s like musical push-ups and sit-ups and flossing your teeth.”

Success on the World Stage

The International Tchaikovsky Competition is held once every four years. It began in 1958 and initially included only the piano and violin. DeLay encouraged Kim to spend a few years preparing for this competition. He entered the event in 1986 and after a rousing performance won sixth prize and was the only American violinist to win an award that year. The success seemed like it would enable to Kim to be what he and his late mother wanted him to be – a top-level violin soloist. He began landing opportunities for solo performances across the United States. But Kim says he started to notice a trend: his invitations to perform in larger cities on bigger stages were few and far between. Most of the invitations were coming from orchestras in smaller towns.

It would take a night at the movies to change Kim’s direction. He and his wife went to watch the movie Jerry Maguire, and the struggles of the main character resonated with Kim.

“He’s trying very hard to reach the top level of his industry and not quite getting there,” Kim said. “I then had an epiphany that the solo career was not going to happen.”

Kim says he decided to try to land an orchestra position instead, but he found the audition process to be challenging. These auditions are done behind screens so no judgments can be made based on appearance. Kim says playing well in an audition without the benefit of a visible audience is difficult.

“It’s a very nonmusical setting behind a screen,” Kim said. “Through those barriers – psychological, physical – you have to make beautiful art in a setting that is so unartistic and uninspiring.”

Eventually Kim found his way. One day he got a call that launched him on the path to where he is now – a job offer from The Philadelphia Orchestra. He says, “I didn’t realize how it would truly change my life forever in every way.”

Kim says as concertmaster his job is to serve as a liaison or translator for the conductor. He helps lead by example to determine the color or phrasing the orchestra may want to create.

“It’s really important that a concertmaster can convey a lot of information through nonverbal communication – maybe the tilt of the head, maybe an expression on my face, maybe the way I move my upper body,” Kim said.

Kim says The Philadelphia Orchestra is such a high-caliber group that nothing is going to go so wrong that he has to save the day; rather, it is very subtle communication. As concertmaster, Kim also represents the orchestra. When the conductor shakes a concertmaster’s hand during a performance, Kim says that is an elegant way of shaking hands with the whole orchestra.

Kim likewise represents the orchestra outside the concert hall. He uses his gifts to share information about the institution and to teach others. An example of this is the work he does at the David Kim Orchestral Institute of Cairn University and during residencies at other universities.

When Kim isn’t teaching or performing, practice is still an important part of his life. He sets time limits for himself to control the number of hours he practices and plans what he is going to accomplish in that time. One idea Kim advocates and utilizes is super-slow practice. He says he repeats passages seven times – his magic number – to teach muscle memory. Before particularly noteworthy performances, he likewise does numerous run-throughs with community audiences. He says he may do this 30 or 40 times before a larger event.

“I will explain to them what I am doing.  ‘I’m going to play the Mendelssohn Violin Concerto, so you are the guinea pigs.’ And they all laugh, and they love it. They feel the nerves – the butterflies churning in my stomach – and they know they are serving a very important role,” Kim said.

Aside from physical preparation, Kim says it’s also important to be mentally ready before practicing or performing. He tries to ensure he is not in a rush, that any distractions are removed, and that his space is clean and tidy. Kim also says it’s important to be physically fit and have good habits to avoid the types of tension some violin players face during challenging performances.

One advantage Kim does have as concertmaster is that he is able to play on a historic instrument. The orchestra has provided him with an instrument that was fashioned by famous violin maker Giovanni Battista Guadagnini, who did his work in the mid-1700s. The violin was donated to the orchestra a number of years ago, and it is now valued at 1.2 million dollars. Kim also uses a valuable bow that is made from Brazilian wood and ebony, with Arabian horsehair from China.

Even with a unique instrument, it can be challenging to consistently perform repeated repertoire with artistic flair. On those occasions, Kim relies on his connection and concern for others to deliver a strong performance. Just like in his childhood when he spent many hours playing for his mother or Dorothy DeLay, Kim focuses on playing for one special person.

“I might pick out somebody – maybe a little girl – and I’ll say, ‘Oh, I want her to be inspired by watching me,’” Kim said. “I might even look at her during the opening curtain call. I’ll give her a little smile, and she’ll notice that first guy looked at me, and I’ll play for her.”

For resources on strings practice and performance, view our books for teachers and students, along with sheet music for violin solos.

To hear more from Kim, view his Pepper Playlist:

The Inside Voice
Finding the Orchestra
Being a Concertmaster
Practice Techniques
The Language of Audition
The Violin and Bow
Violin Sonata No. 2 in A Minor, BMV 1003 by J.S. Bach
The Importance of Art

0:24 The musical upbringing that made David Kim the concertmaster of the Philadelphia Orchestra
2:38 Making incredible progress at only eight years old
3:16 The most influential person in Kim’s life
4:26 Attending the Aspen Music Festival
4:51 The tragic passing of Kim’s mother
6:28 Attending Juilliard