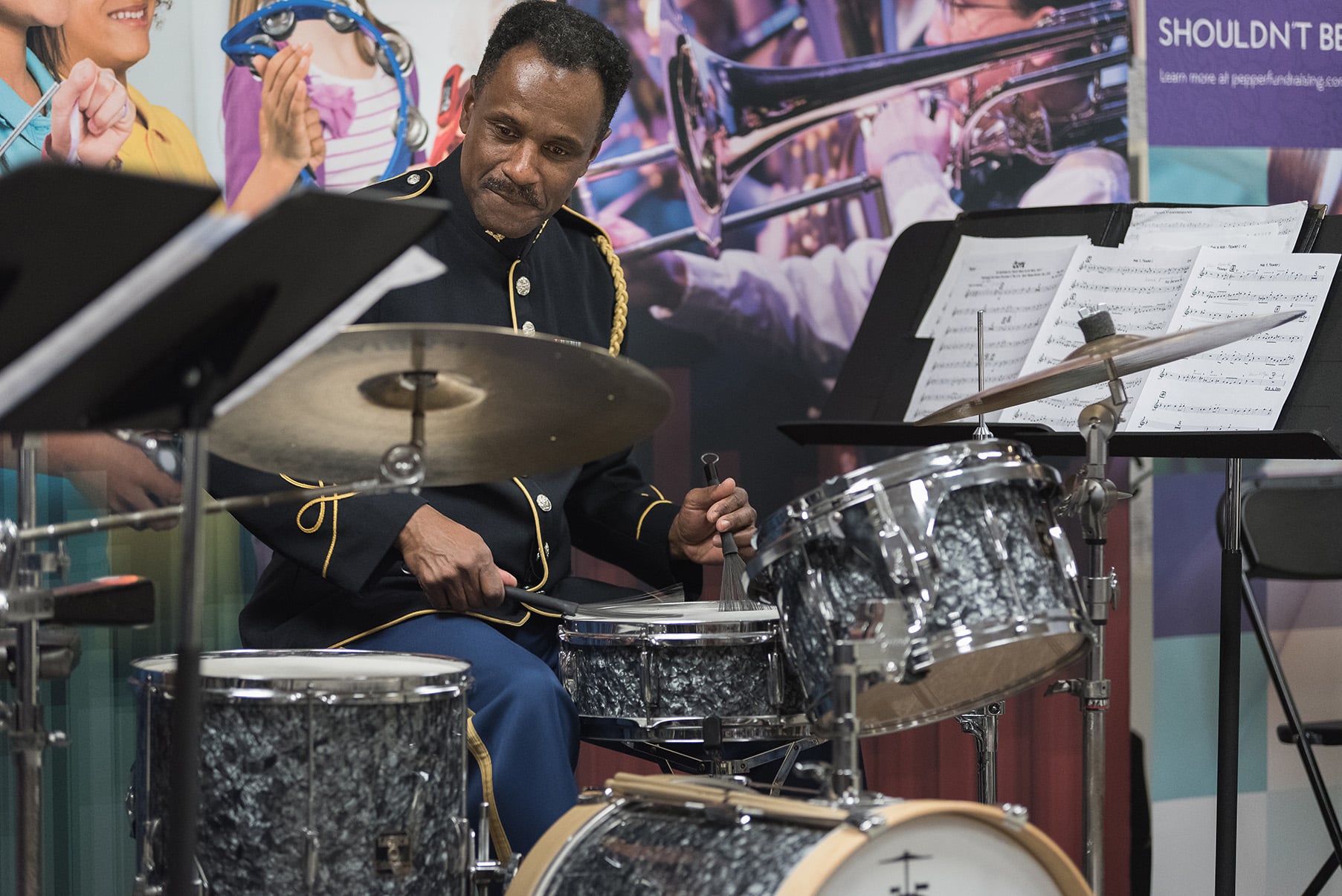 With the nation’s birthday approaching, it is appropriate to celebrate the men and women of the United States military, without whom we would not have the many comforts and freedoms we often take for granted. It takes all kinds of people to make our armed forces the elite presence it is in the world, and we honor each of their contributions, thanking them for all that they do for us.

Military bands have long been a staple of countries around the world, especially in Europe. It was those bands that inspired General John J. “Black Jack” Pershing to create the United States Army Band in 1922. Army Chief of Staff at the time, Pershing was a hero of the First World War, during which he developed a great respect for the European military bands. Because it was at his behest that the ensemble was formed, the U.S. Army Band is often referred to as “Pershing’s Own.” Since its creation, the band has provided musical support for the leadership of the United States, including all branches of government, a wide spectrum of national and international events, soldiers and their families, public diplomacy, community and international relations, recruiting initiatives, and music education programs.

The band’s most important duty is to honor our nation’s heroes at Arlington National Cemetery. It has also played for every presidential inauguration since 1925 and has been part of the escort of each inauguration parade. The U.S. Army Band also supports music education, often serving as a featured group at prominent music conferences and conventions around the world. “Pershing’s Own” performs free concerts throughout the year. In the summer months, they play on the West Steps of the Capitol building and in the local parks. For the cooler months, they move to Brucker Hall in their Fort Myer, Virginia headquarters.

Pepper had the pleasure of hosting one of the elite ensembles within “Pershing’s Own” and speaking to their members about what makes the U.S. Army Band so special. Watch the interview above.

Since the 1970s, the premier ensemble within “Pershing’s Own” has been the Army Brass Quintet. The quintet is a must-see for any musician, especially lovers of brass music. It was conceived by tuba player Jack Tilbury in response to changing structures in military organization. Combat tactics were switching toward a focus on smaller, more nimble units, and Tilbury felt that the Army Band should do the same. From that philosophy the Brass Quintet was born, along with a number of other smaller groups.

Each musician still plays with the larger ensemble, but these groups make it possible for the Army Band to perform at hundreds of different events each year. The Army Brass Quintet alone made over 140 appearances in 2015. These appearances include a wide range of events for many different governmental and diplomatic purposes. The quintet often plays for White House events, State Department functions, and the Pentagon. It is a staple at retirement ceremonies and visits by foreign heads of state.

The Army Brass Quintet also travels around the world, representing our nation in many different countries. In 2015, the quintet traveled to Cuba to play for the flag-raising ceremony over the United States Embassy. The ceremony marked the reopening of diplomatic ties between the two nations, which had been severed since 1961. In the past, the quintet has also traveled to Russia to help celebrate their Victory Day, which commemorates the Soviet Union’s capture of Berlin during World War II. They performed with the Russian National Orchestra and its Brass Quartet, joining them in the world premiere of a piece written for the occasion.

As an elite ensemble within an already elite collection of musicians, the Army Brass Quintet is one of the most recognizable military ensembles in the nation. However, they are just one small group. There are many more fantastic ensembles.

Military bands have long been a tradition around the world. Many armies used music as a way to signal troops during battle because instruments could be played far louder than officers could call out orders. In the United States, many people are familiar with the bugle calls associated with advancing and retreating maneuvers, as well as an assortment of other calls. Around the world, different systems are used. Throughout history, some musicians were expected to play for the duration of a battle, using changes in the music to signal troop maneuvers.

Today, while bands spend less time close to the front lines, the tradition of military bands continues. The U.S. Army itself has four special bands (“Pershing’s Own,” The Army Field Band, The Old Guard Fife & Drum Corps, and the Military Academy Band), in addition to the 18 Reserve and 52 National Guard bands. Each arm of the military has its own collection of bands for different occasions. All together, the U.S. military fields over 60 bands comprising active-duty musicians.

These musicians are some of the most skilled in the country and are passionate about what they do. The frequency of events and the rigors of the training schedule make military bands an excellent choice for serious musicians looking to improve their craft. If you’re interested in joining up, you’ll want to look into…

The training of military bands dates back to near the birth of our nation, but until the 20th century, it was often sporadic and had no universal standards. Formal training for Army bandmasters began at Fort Jay, New York shortly before the outbreak of World War I. The Army School of Music has moved to a number of different locations over the years, and after World War II it was combined with the Navy’s school to form the Armed Forces School of Music.

The schools operated jointly until 2010 when the Army School of Music formally split off. Today, the two organizations share facilities in Virginia Beach, Virginia but operate independently. Both schools accept musicians from all over the United States of America. For those looking for a high-quality education and the opportunity to study what they love while serving the nation, the Army and Navy Schools of Music are excellent choices.

Check out our brass music and brass accessories.

Watch our interview with the Army Brass Quintet.