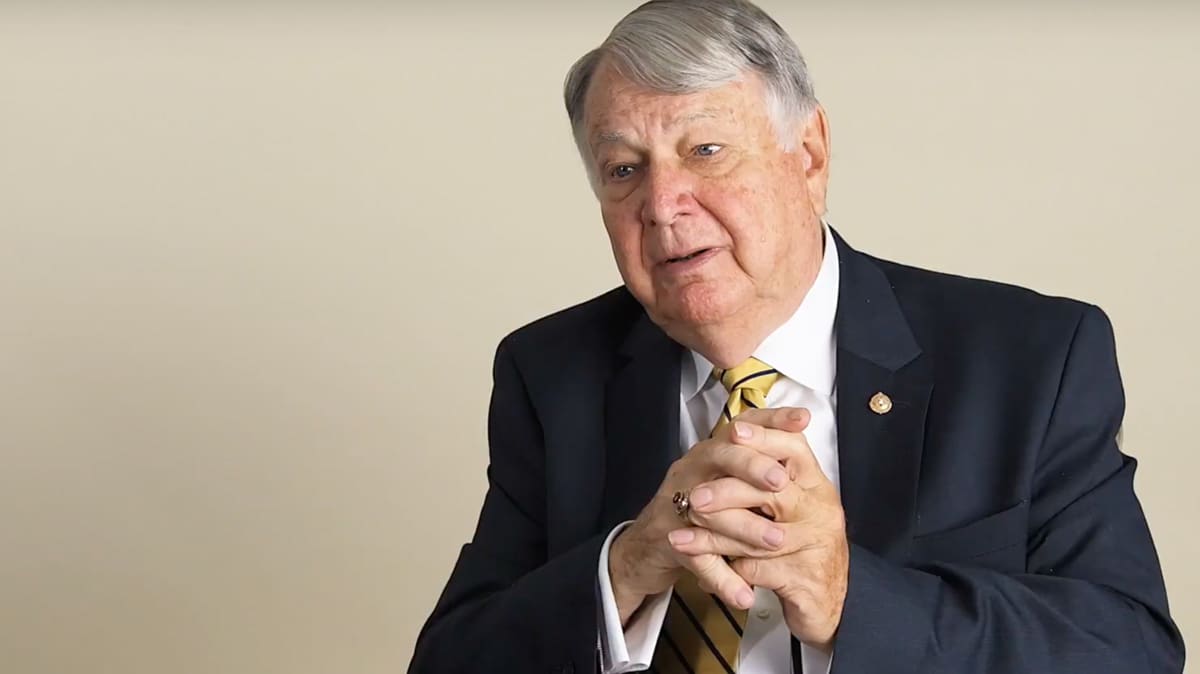 The Inside Voice: An Interview with Colonel John R. Bourgeois

Nothing rouses the spirit like a march, and few bands can capture the patriotic fervor of an American march like the United States Marine Band. Affectionately known as “The President’s Own,” the Marine Band was founded in 1798 by an Act of Congress signed by President John Adams and is the longest performing musical organization in the nation. For over 200 years, the Marine Band has been led by legendary American musicians like John Philip Sousa. One of these renowned directors, Colonel John Bourgeois (Ret.), sat down with Pepper to discuss his time with the Marine Band and how its work has impacted American culture both at home and in the eyes of the world.

Growing up in Louisiana, Bourgeois was exposed to music throughout his young life. He attended Loyola University in New Orleans where he studied under George Jansen. While at Loyola, he spent some time working as a backstage conductor at a local opera. The experience was challenging, but it set the foundation for his future as a band leader.

In 1956, Bourgeois was to be drafted into the United States military, so he decided to enlist in the Marine Corps. He was assigned to the Marine’s Pacific Forces Band in San Francisco where he stayed for two years. In 1958, he auditioned for the “The President’s Own,” where he would remain until his retirement in 1996. His career spanned nine presidential administrations, from Eisenhower to Clinton, becoming director of the band during the Carter administration.

Conducting the Marine Band made Colonel Bourgeois a unique witness to history. The band’s responsibilities go far beyond making music for domestic events. Throughout its history, the Marine Band has engaged in diplomatic missions around the world, using music to bridge gaps that mere words cannot. The spirit of their mission is encapsulated in the Sousa march Hands Across the Sea, the Bourgeois arrangement of which has been played in countries such as the United Kingdom and Ireland.

Over the course of 18 days in February 1990, he also performed across the Soviet Union alongside a military band from the USSR. Playing both American and Russian music, the Marine Band was able to win over the Russian audiences. Finishing each concert with a performance of the 1812 Overture, they received many standing ovations.

Truly, the Marine Band is special in many ways. Some of the best musicians in the nation play in “The President’s Own.” The members are of such high caliber that how they fit with the other instrumentalists is as important as how talented they are. In short, the best musician in the world may perform the perfect blind audition, but if that musician’s talents do not complement the band perfectly, they might not be chosen to join. On top of talent and musicality, members also require an interview and security clearances. It is one of the most selective ensembles in the nation, but in Colonel Bourgeois’ opinion it is one of the most rewarding experiences a musician can have.

Bourgeois highlights this with stories not only about his travels and the presidents he has served, but also about some of the amazing people he has met. One such person was former Marine Band director William Santelmann. The story, best heard in Bourgeois’ own words, is a compelling tale of devotion to music and the love of song:

That level of dedication to and love for music and community is what being a musician is all about. Though he is retired now, Colonel Bourgeois continues to inspire musicians across the nation. He works with high school and college bands, but to him there is something very special about community bands. As the director of the Sousa National Community Band, Bourgeois does his best to preserve classic American songs and styles. As he says, “Community bands don’t forget. They keep the music alive.”

But directing is not all Colonel Bourgeois does to maintain our musical heritage. Upon his retirement, he was left with an enormous library of music. On one occasion as he was planning music for a guest conducting appearance, he found a piece called Old Comrades. He wanted to conduct the piece, but realized it was in the wrong key and some edits over the years had changed the nature of the piece. Bourgeois decided to arrange it himself, bringing it back to its original style as closely as he could.

After this success, Bourgeois decided to do the same with other classic American songs. Noting that the works of John Philip Sousa have gone through many revisions over the years, Bourgeois has endeavored to arrange these pieces in a manner that is much closer to how they were originally intended to be played. Working with Wingert-Jones Publications, Bourgeois is bringing the sound of Sousa to the modern day as it would have sounded a hundred years ago.  In addition to marches, Colonel Bourgeois has also done numerous transcriptions of works ranging from classic orchestral repertoire to a monumental setting for chamber winds of Johann Sebastian Bach’s masterpiece, The Goldberg Variations.

In closing, Bourgeois perfectly sums up what music means to him and so many others: “Music to me… it’s my lifeblood.”